The Super Bowl 2023 will take place on the night of February 12-13 at State Farm Stadium in Glendale, Arizona. The game begins at 6:30 P.M. ET.
Home
Miami Dolphins
NFL

Jason Taylor, a member of the Professional Football Hall of Fame and one of the best players in the history of the Miami Dolphins 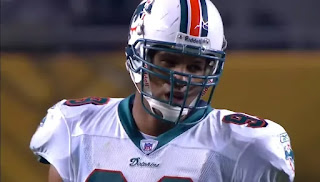 On September 1, 1996, the first official match of the Baltimore Ravens franchise took place. At home, the team beat the Oakland Raiders with a score of 19-14. Ravens' first points in history were scored by quarterback Vinnie Testaverde with a 9-yard touchdown.

In 2006, Roger Goodell officially took over as NFL Commissioner. He has been in this position for fourteen years. In 2019, his new contract came into effect, under which Goodell will carry out his duties until 2023.
Jason Taylor, a member of the Professional Football Hall of Fame and one of the best players in the history of the Miami Dolphins.

Jason Paul Taylor was born on September 1, 1974 in Pittsburgh. He played for the Woodlands Hill School team, although he has been homeschooled for the past three years. This option was insisted on by Jason's mother, who believed that this approach contributes to the development of responsibility in a teenager. After graduation, he entered the University of Akron, Ohio. In his four years of college career, Taylor has made almost 300 grabs, 21 sacks and three interceptions. For one season, he was a starter on the college basketball team.

In the 1997 draft, Miami selected him in the third round and in the first year he established himself as one of the most effective Defensive end in the league. At the Dolphins, Jason spent the first ten years of his career. Six times he was selected to Pro Bowl, three times included in the first All-Pro team. In the 2002 season, Taylor made 18.5 sacks and was named AFC Defensive Player of the Year. 2006 became even more successful for him: to 13.5 sacks he added 9 forced fumbles and 2 interceptions, which became touchdowns. This performance earned him the Defensive Player of the Year award. However, in the summer of 2008, Jason left the club. It all started with the player's decision to skip voluntary training in order to participate in the show "Dancing with the Stars", where he, together with the Polish dancer Edyta Sliwinska, Reached the final. Club president Bill Parcells was dissatisfied with the player's behavior, who was eventually traded to Washington for two picks in the draft. As part of the Redskins, Taylor spent a nondescript season, and in the spring of 2009 the club expelled him: the player again refused to participate in training in order to spend the offseason with his family. Jason was back in the Dolphins. The 2009 season marked him with his sixth career touchdown fumble return, an NFL record. In 2010, he signed a two-year contract with the Jets, but played only a season on it, and then returned to Miami for the third time. In December 2011, Taylor announced his retirement. During his performances, he played 233 games in the regular season and made 139.5 sacks. Jason now ranks seventh for this indicator. In 2017, he was elected to the Professional Football Hall of Fame the first time. He is also included in the team of stars of the 2000s.

After finishing playing, Taylor worked as a commentator and analyst for ESPN. He is engaged in charitable activities and has three children. In 2012, Invicta launched a limited collection of watches, designed by Jason. The proceeds from its sale were also used to implement charity programs.