Jim Plunkett - Winner of the 1970 Heisman Trophy and Maxwell Award as the best college player of the year. He played for The Oakland Raiders as a QB. 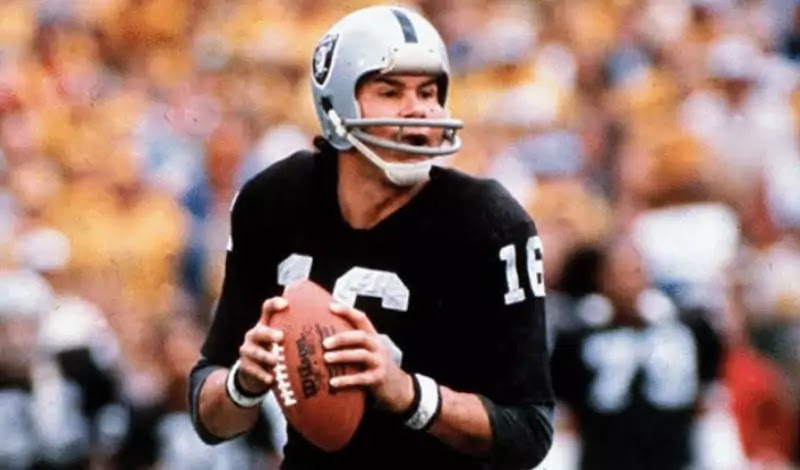 James William Plunkett - Winner of the 1970 Heisman Trophy and Maxwell Award as the best college football player of the year, Plunkett started at quarterback for two years at Stanford University. He completed 530 of 962 td passes for 7,544 yards and 52 touchdowns, becoming the first player ever to account for more than 7,000 Passing yards and in total offense.

Plunkett was born Dec 5, 1947. He joined the NFL's New England Patriots as their first round draft choice in 1971 and was named rookie of the year after completing 156 of 328 attempts for 2,158 yards and 19 touchdowns. That was the beginning of a roller-coaster pro football career.

Playing behind a shaky offensive line, the 6-foot-2, 220-pound Plunkett was frequently sacked and suffered a variety of injuries during the next four seasons. In 1976, the Patriots traded him to the San Francisco 49ers, who released him after the 1977 season.

Plunkett joined the Oakland Raiders as a backup during the 1978 season. He took over as the starter after Dan Pastorini suffered a broken leg in the fifth game in 1980 and he helped lead the Raiders to the Super Bowl Champion as a wild card team. In Oakland's 27-10 win over the Philadelphia Eagles in Super Bowl XV, Plunkett completed 13 of 21 passes for 261 yards and 3 touchdowns and was named Super Bowl MVP.

An injury limited his playing time in 1981. The Raiders moved to Los Angeles in 1982, when a player strike shortened the season. With Plunkett throwing well once again, the Raiders won 8 of 9 regular season games but lost in the second round of the playoffs.

He was replaced by Marc Wilson during the 1983 season. However, Wilson was injured and Plunkett led the Los Angeles Raiders to 6 victories in their last 7 games. He completed 16 of 25 passes for 172 yards and 1 touchdown as the Raiders won Super Bowl XVIII 38-9 over the Washington Redskins.

In 1980 he was traded to the Houston Oilers for Dan Pastorini, whom Raiders' owner Al Davis regarded as a more effective deep passer. The Oilers in turn saw Stabler as the missing ingredient that could finally get them past the Steelers and into the Super Bowl. Ironically, Pastorini lost the starting job in Oakland to Jim Plunkett after an injury, and Plunkett then led the Raiders over Stabler and the Oilers in the playoffs. Stabler played one more season with Houston and then finished his NFL career with a three-year stint with the New Orleans Saints.

He currently provides color commentary alongside Eli Gold for broadcasts of Alabama football.