Here's the 10 Facts You Didn't Know About The Cleveland Browns quarterback Deshaun Watson, his family, girlfriend, his years at school and college.

Deshaun Watson is an American football quarterback for the Cleveland Browns, he was the most highly touted QB coming out of college since Andrew Luck. The Texans drafted Watson and he became the QB1 right away. As a fantasy owner, you want him on your team! Here's the 10 Facts You Didn't Know About Deshaun Watson. 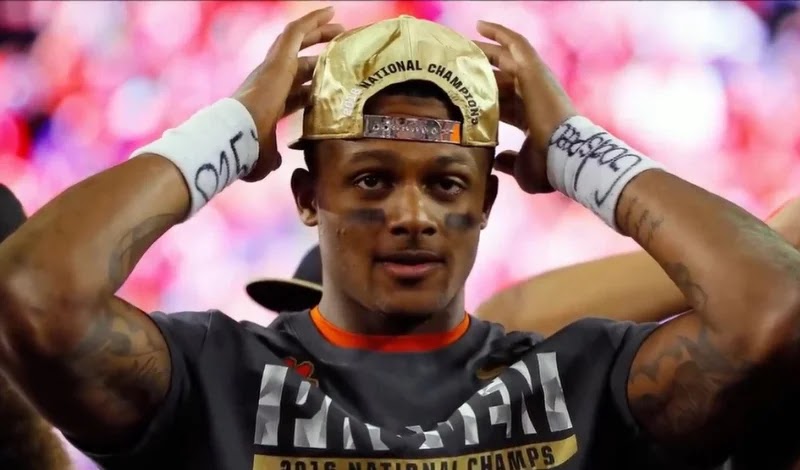 10. Deshaun Watson was considered the number one quarterback recruit coming out of high school.

Cleveland Browns QB Deshaun Watson was considered one of the very best quarterbacks in the country when he signed to Clemson University.

According to the ESPN 300 recruiting database, he was ranked the top dual-threat quarterback, and was also ranked the 8th overall quarterback in the South East region.

According to many Clemson University fans, he was the leading quarterback in the country when he signed to them in 2014.

9. Deshaun Watson made an early impact in high school.

When he came to Gainesville High School in Georgia as a freshman, it was the year after they had lost the state championship, and the Red Elephants already had a junior ready to step up and play.

Cleveland Browns quarterback Deshaun Watson was however so good in the spring that the other quarterback volunteered to move to wide receiver and let him play. He started, and it was the first time the coach had ever started a freshman.

Steve Fuller had played quarterback for the Clemson Tigers between the years of 1975 and 1978, excelling so much that the jersey he wore, number 4, was retired.

The number 4 was obviously a special number for Watson, having worn it in high school.

His coach felt that his skills warranted the jersey coming out of retirement, and after Steve Fuller had given his permission, Watson was eventually given the honors of wearing the great Clemson number 4.

It is a decision that seems to have worked out, as Steve Fuller remains full of praises for Watson, saying he is proud of his accomplishments and of his decision to allow the jersey number to come out of retirement.

The Jilly Anais dating rumors started when Jilly Anais posted photos of her trip with Watson to the Atlanta Hawks Game on her Instagram stories.

The Browns quarterback Deshaun Watson has met his girlfriend for the first time at a restaurant in Los Angeles, they had an eye contact, after that, they fall in love with each other.

QB Deshaun Watson grew up without a father, and his mother was the single constant fixture in his life. This could be the reason why he often names his mother as his biggest inspiration.

They have a special relationship, and his mother was the first person he bought a gift for when he signed in 2017.

Before his rookie season, he posted photos with his mother and the new Jaguar he had gifted her on her birthday. The Jaguar was apparently her first official car.

Quarterback Deshaun Watson has three siblings, two of whom are twins. He is the second of four siblings, with a brother a few years older than him. His younger siblings Tinisha and Tyreke, are twins.

All the boys in the Watson family had a passion for football, with all of them playing at some point, his younger sister also ran track, rounding up the sporting family.

He currently holds the record for the most passing touchdowns in a single game. During his first start, he led the Tigers to a win over Florida State, throwing for 435 yards and 6 touchdowns on 27-of-36 passing.

This was not the only record he set, though. He also holds the school record for the most passing touchdowns in a single season, with 41.

Deshaun Watson has an amazing ability as a passer, ending his college career with the most yards in a single season at 4,593 in 2016. He also set the record for the highest single-game total, with 580 yards against the Pittsburgh Panthers.

In 2015, he also set the record for the most passing and rushing yards. According to the NCAA, he finished the year with about 5,209 combined yards, just breaking the previous record held by Johnny Manziel.

3. Watson worked at a judge’s office in high school.

The NFL QB Deshaun Watson was forced to make ends meet for his family at a difficult time, forcing him to work in the office of Judge Andy Fuller at his local courthouse.

He would attend football practice, and every Monday, Tuesday, and Wednesday, work at the courthouse until it closed at 10 p.m.

He only did clerical work though, with his job being mostly the printing and organization of paperwork.

He was so frequent at the courthouse that the judge gave him his own key. This was at a time when his mother was away for treatment, and he had to take care of his younger siblings.

When Watson was only 11, his family was handed the keys to their new home through the Habitat for Humanity program.

In fact, it was Watson that initially heard about the program, bringing his mother a flier and encouraging her to participate.

The former NFL star Warrick Dunn was part of the team that built the house, eventually handing the Watson family the house keys in 2006.

When he was a sophomore in high school, his mother was diagnosed with stage five tongue cancer at a time when his family was struggling through financial difficulties.

His mother had to have treatment in Atlanta, and ended up having her tongue surgically removed.

She eventually pushed through, citing her kids as the source of her single-minded focus on recovery at the time.