Baker Mayfield is a quarterback for the Los Angeles Rams, who was drafted in the first round of the 2018 NFL Draft. He also played college football for the Oklahoma Sooners. Here's the 10 Facts You Didn't Know About Baker Mayfield. 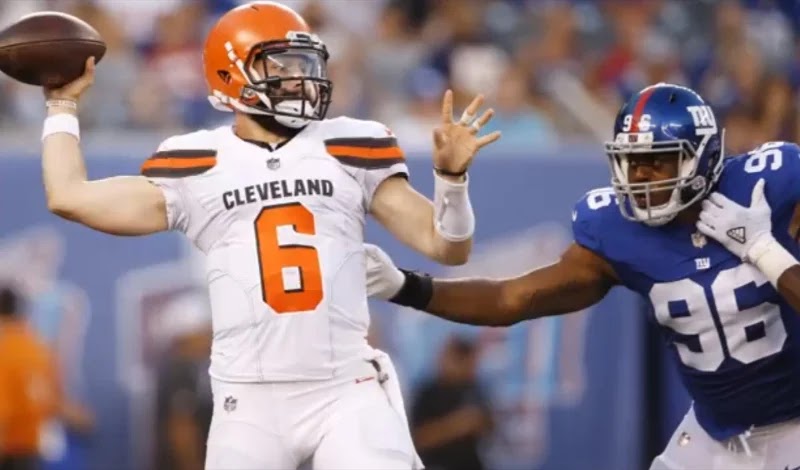 He has an older brother named Matt. His brother was a walk-on baseball player at Texas A&M. His father, a private equity consultant, encountered financial difficulties during Mayfield’s senior year in high school.

These struggles forced the Mayfields to sell their family home and move from rental home to rental home. Related : Facts about Deshaun Watson.

9. Panthers QB Baker Mayfield grew up as a fan of Oklahoma, and he attended a number of their games during his childhood.

His father played football for three years for the University of Houston, though he never lettered. When Mayfield first started playing football in the fifth grade, he wanted to play receiver, but said, “I wasn’t fast enough.” A coach who knew he played baseball moved him to quarterback.

Mayfield predicted in the sixth grade that he would one day play in the NFL.

8. When he was a kid, he would watch “SpongeBob SquarePants” with his father on Saturday mornings.

One Saturday morning he walked into the kitchen and told his parents, “I’m going to watch ESPN from now on.”

He started doing that and that’s where he learned his baseball stance. His first love is baseball and he played at first base in high school as the only junior to start, mostly because he could hit and they needed him in the lineup.

He played all over the infield growing up, but his main spots were shortstop and third base. He also once said that he would try out for the Texas Rangers.

QB Baker Mayfield had a huge growth spurt in high school. As a freshman, he was listed at 5-foot-2 and as a junior, he was nearing 5-foot-10.

Today, he stands at 6-foot-2. Mayfield, during his high school years, said he thought about quitting football because it was interfering with playing “Halo.” Today, he still plays the “Halo” series and is really good at it.

6. On September 9, 2017, after a win against the Ohio State Buckeyes in Columbus, he planted the Sooners’ flag in the middle of the painted “O” at Ohio Stadium, causing a major public backlash.

Quarterback Baker Mayfield issued an apology shortly afterwards. In November 2017, he was under fire again after an interaction during the game against Kansas.

Carolina Panthers QB Baker Mayfield was seen grabbing his crotch and mouthing “Fuck You!” at the Jayhawks’ sideline. He also told their fans to “Go cheer on basketball.”

In response, he issued another public apology. Days after the game, Sooners head coach Lincoln Riley announced that Mayfield would not start or be the captain during the upcoming game against West Virginia due to his inappropriate actions.

5. Baker Mayfield' mother, two of her friends, and his aunt were involved in a car accident.

The accident killed three people and left his mother and his aunt seriously injured. He would frequently visit his mother when she was in rehab and their bond strengthened.

At the NFL Combine, he sat down with a psychic and got told that he would be drafted by the Arizona Cardinals.

3. In June 2018, he announced his engagement to Emily Wilkinson, a former patient coordinator for a plastic surgery clinic in Beverly Hills and current Instagram model.

Some of his favorite movies are “Shooter” and the “Jason Bourne” series. If he could go to dinner with three people, he would go with Brett Favre, Blake Lively, and Michael Young, a former MLB player.

Baker Mayfield thinks Justin Timberlake is the most talented man in the world.

1. On February 25, 2017, he was arrested in Washington County, Arkansas on public intoxication and fleeing charges.

The charges included public intoxication, disorderly conduct, fleeing, and resisting arrest. At 2:29 a.m. that Saturday, a police officer was flagged down on an assault and battery report.

The person who flagged the officer was yelling at Mayfield. The preliminary police report described Mayfield as unable to walk straight, having slurred speech, and food covering the front of his shirt.

When he was asked to stay so the police could get a statement, he began shouting obscenities and “causing a scene.” He was booked at 8:21 a.m. local time on misdemeanor charges. He had a court date on April 7th for the public intoxication charge and pleaded not guilty to all charges.

On June 15, 2017, the University of Oklahoma ordered Mayfield to undergo 35 hours of community service along with completing an alcohol education program. He issued a long apology calling it one of the “biggest mistakes” of his life.

That’s all 10 Facts You Didn't Know About Baker Mayfield, tell us if you think Baker Mayfield will be the quarterback to lead the Cleveland Browns to their first Super Bowl win!