Stefon Diggs is an American football wide receiver for the Buffalo Bills of the National Football League. He's one of the top players on the team and one of the best in the league. He played college football at Maryland, and was drafted in the 5th round of the 2015 NFL Draft by the Vikings. Here's the 10 Facts You Didn't Know About Stefon Diggs. 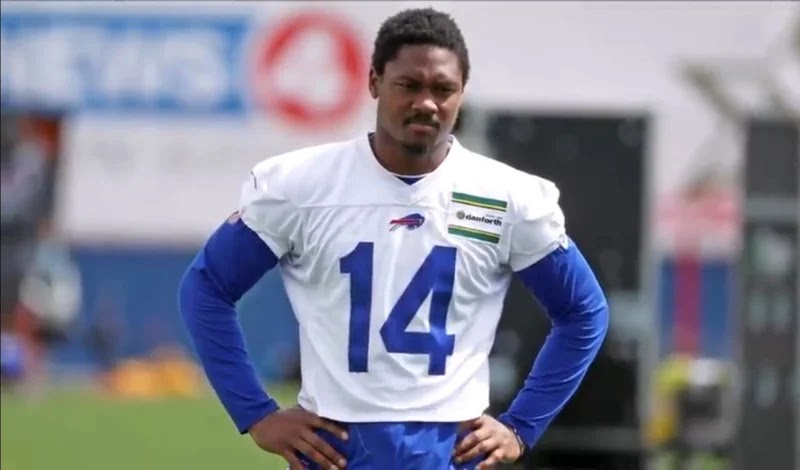 10. Stefon Diggs set a career record in 2020 with the Buffalo Bills with over 110 receptions.

It is just the second time in six seasons that he has over 100 receptions. He also reached the 1000-yard receiving mark for the third-straight season.

9. In January of 2017, Stefon Diggs was accused on social media of forcing a woman to abort his unborn child.

The woman, who goes by the name Reyna, blasted Diggs on social media, claiming the football star got two women pregnant at the same time.

Diggs wasn’t interested in being the father to Reyna’s child and allegedly encouraged her to abort the baby. Reyna unleashed on Diggs via Twitter and even gave out his phone number and Snapchat. She encouraged her social media followers to contact Diggs in her support.

Reyna wanted Diggs to reimburse her the $500 she spent on the abortion. In addition, Reyna claimed she had sex with Diggs’ brother Trevon around the same time as Stefon.

8. Some high-profile women have been linked with Stefon Diggs over the years.

While he keeps his current love interest off his social media, Stefon Diggs’ previous girlfriends have been more widely seen and talked about by the wide receiver.

In the summer of 2018, Diggs was linked to a relationship with stripper Danni the Dream. Months later, gossip linked him with singer Bridgett Kelly.

While being linked to these two fine women, Diggs was on again, off again with his baby mamma, Tyler Marie.

Marie and Diggs gave birth to their daughter in October of 2016.

Diggs was just 14 years old when his dad passed away of congestive heart failure. When Aaron died, he asked Stefon to take care of the family: mother Stephanie, sister Porsche, and brothers Trevon and Mar’Sean.

As the oldest child, Diggs became a father figure to his siblings. It led him to remain near home and play for Maryland University rather than accept a scholarship to an out of state school.

Stefon Diggs’ brother, Trevon, was drafted by the Dallas Cowboys in 2020 in the NFL Draft’s second round. According to Trevon, Stefon was like his father growing up. Stefon’s mentoring helped Trevon reach the NFL as a cornerback for the Cowboys.

Diggs’ other brother, Mar’Sean, currently plays at the University of Alabama Birmingham.

6. Stefon Diggs was a fifth-round pick and faced an uphill battle to make the Vikings squad.

Although Diggs is a household name, he wasn’t a sure thing when the Minnesota Vikings drafted him out of Maryland University.

Diggs was a fifth-round pick and faced an uphill battle to make the Vikings squad. When Diggs completed the Minnesota Miracle, it was nearly 10 years to the day his father died.

His father’s death was a motivator for Diggs to succeed in the NFL. His dad was surely smiling down on Diggs that day versus the New Orleans Saints in the playoffs.

5. The wide receiver has become well-known for his footwear choices around the holidays.

In December of 2018, Diggs wore a pair of Adidas cleats with a ‘Home Alone’ theme featuring Macaulay Culkin’s face painted on the side.

One year later, Diggs broke out another pair of Adidas cleats, but this time for the holidays, they were inspired by Will Ferrell’s iconic ‘Elf’ film.

4. Stefon Diggs isn’t known as a self-advertiser on social media.

He likes to keep things low profile and that is why a lot of fans are unfamiliar with his current girlfriend, Tae Heckard.

The couple have been together for around two years and according to reports, Heckard relocated to Buffalo in 2020 when Diggs was traded from the Minnesota Vikings to the Bills.

Some sports fans may be familiar with Heckard. She is the former partner of NBA player Brandon Jennings and has a son with the basketball player.

3. Stefon Diggs is just 28 years old, but his girlfriend, Tae Heckard is much older.

The mother of one, and former partner of NBA player Brandon Jennings is 43 years old. Born in Seoul, South Korea in 1978, Heckard is most famous for being on the television series ‘The Game.’

While Diggs doesn’t post about Heckard on his social media, she has been known to post regularly about the wide receiver. It has led some of her social media followers to criticize the couple's relationship as Diggs doesn’t “claim her” on Instagram.

2. The relationship Diggs and Heckard have is complicated as it appears the wide receiver likes to keep his options open during the NFL season.

Perhaps one reason he hasn’t settled down with one woman or claimed Heckard is because he likes NFL road trips.

According to Barstool Sports, prior to the 2019 season, Diggs and Heckard split up, so he could enjoy life on the road.

1. One of the biggest questions over the course of the NFL’s offseason was why the Vikings traded Diggs to the Buffalo Bills?

The trade came just two years after Diggs signed a mammoth five-year, $72 million contract with Minnesota. There are three reasons cited for Diggs’ trade. The first is the Vikings wanted to run the ball more. With Diggs being paid so much money to block, he became expendable.

The second reason Minnesota was happy to trade the wide receiver was due to the number of draft prospects available at the position in 2020.

The final reason Minnesota dealt the wide receiver was due to Stefon Diggs’ relationship with the team deteriorating. He missed OTAs in 2019 and skipped a practice without informing the team ahead of time during that season.

After skipping practice, Diggs was fined $200,000 by the team. All three elements combined in Minnesota’s decision to trade Diggs.

The wide receiver claimed in December of 2020 that Minnesota’s front office did not have his career in their best interests nor were they honest with him.

That’s all 10 Facts You Didn't Know About Stefon Diggs, tell us where you would rank Stefon Diggs among the best wide receivers in the league!