After the Cowboys’ loss in the Wild Card Round of the playoffs, fans were seen throwing trash on the field. Dak Prescott have zero issues with them.

After the end of the Cowboys game, some fans threw trash on the field as the referees were running to the exit tunnel.

Most of the trash appeared to be drinks and empty cups.

In his post-game press conference, Dak appeared to have zero issues with fans doing this.

When he was told that fans threw trash at the officials, Dak said, “Credit to them then.”

In the Wild Card Round of the playoffs, Dak Prescott and the Cowboys offense struggled mightily against the 49ers defense.

Following the game, 49ers defensive back Jimmie Ward said that they wanted Dak to attempt to beat them with his arm.

The 49ers’ gameplan was to shut down the run and see if Dak could win the game for the Cowboys.

Ward acknowledged the talent of Dak, but it seems like the 49ers’ coaching staff did not believe that Dak could beat them with his arm.

Demarcus Lawrence responds to getting hit by trash from Cowboys fans

After the Cowboys’ loss, fans were seen throwing trash on the field.

#Cowboys fans throwing things at their own players. Got this sent to me by one. Be better fans wow! pic.twitter.com/mlVttbFlpg

The trash appeared to be for the refs, but it hit Demarcus Lawrence and many people thought that the fans were aiming at the players on the Cowboys.

After the game, Lawrence said, “That shit was aimed at the refs…it had nothing to do with me.”

Cowboys player pleads with fans to keep their hate and anger away from his family.

Late in the game, Cowboys defensive lineman Neville Gallimore had an illegal hands to the face penalty that extended the 49ers’ drive.

This took time off the clock that the Cowboys could have used in their final drive to potentially win the game.

Gallimore saw the hate online and pleaded with fans to keep his family out of it.

He tweeted, “I deserve all the hate and slander. Cowboys nation I let y’all down. Put it all on me, all I ask is you leave my family out of this. I played the game they didn’t.” 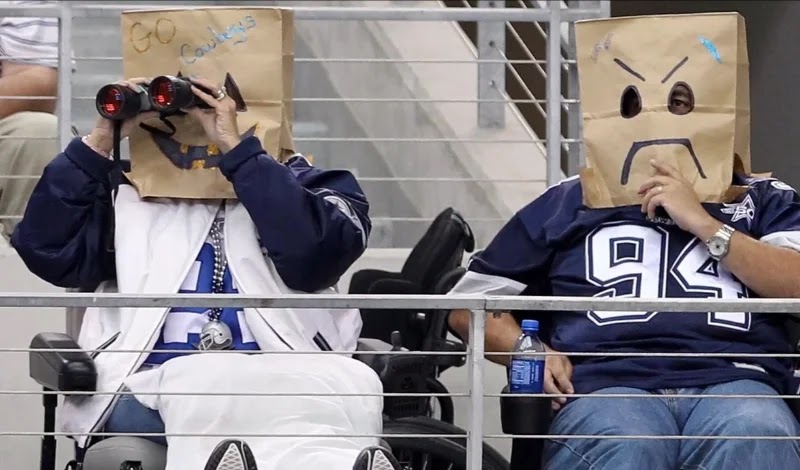 As usual, many Cowboys fans thought that this was the year that their team was going to win it all.

The loss left many fans in AT&T Stadium sad and distressed. The cameraman that was working the game was picking these fans out one-by-one.

First, it was a female fan that was seen crying. Then, the cameraman caught a sad couple attempting to embrace and console one another.

Some people online joked about these sad fans and some even thought that the cameraman was a 49ers fan.

Fans brawled during and after the Cowboys game.

In one incident, a female Cowboys fan could be seen picking up an item and throwing it at a celebrating 49ers fan.

The Cowboys fan had to be held back while the 49ers fan looked for security.

In another incident, after the Cowboys game ended, a major brawl took place outside of AT&T stadium.

Fans were seen getting punched and kicked in the head. Police officers ended up having to separate the fans.

During the game, fans were also seen fighting each other in the stands.