The Super Bowl 2023 will take place on the night of February 12-13 at State Farm Stadium in Glendale, Arizona. The game begins at 6:30 P.M. ET.
Home
Jakobi Meyers
New England Patriots

Everything You Need to know about Jakobi Meyers

Everything You Need to know about Patriots WR Jakobi Meyers, stats, Scouting, 40 time , fantasy outlook, his years at college and NFL.

The New England Patriots undrafted free agent Jakobi Meyers has burst onto the scene establishing himself as a legit NFL wide receiver. Why did he go undrafted? 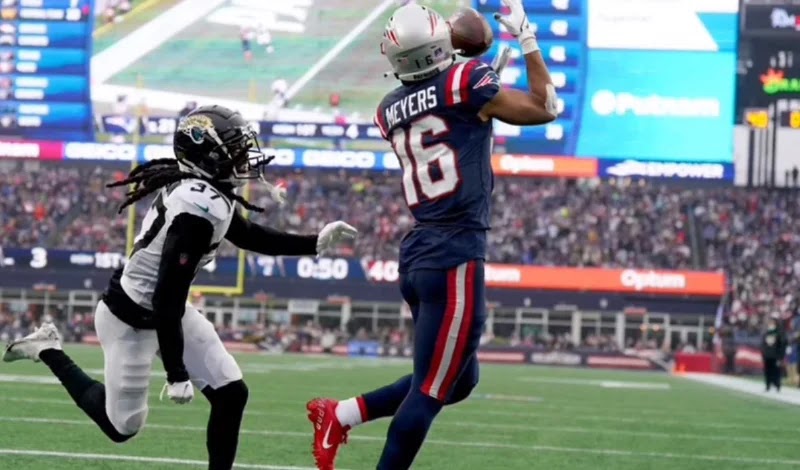 When was Jakobi Meyers drafted?

Meyers sign by the New England Patriots as an undrafted free agent in 2019, he debuted in the Patriots' preseason opener against the Detroit Lions, recording a game-high six catches for 69 yards and two TDs and a Patriots win.

In the Patriots' second preseason game against the Tennessee Titans, Meyers again had a game-high six catches for 82 yards, he also had a two-point conversion reception in another win for New England.

Even more impressively no Patriots wide receiver not named Meyers collected more than a single pass from the quarterbacks against the Titans, so how did Jakobi Meyers go undrafted!

He is good-sized at 6-foot to 203 pounds but he's not a monster. you were in a 4.63-second 40-yard dash which certainly hurt him, he timed it 7.07 seconds in the three-cone drill at the combine. that's not a terrible time, but it's certainly nothing remarkable.

He also didn't Wow with a 37-inch vertical leap and a 9-foot 10-inch broad jump in a 4.23-second short shuttle. he caught 92 passes for 1,047 yards with 4 TDs as a junior in 2018, but his teammate Kelvin Harmon a sixth-round pick got more attention-catching 81 fastest for over a thousand yards and seven touchdowns.

Related : Is Jakobi Meyers With the Patriots Officially or Not

So more specifically, what's the scouting report on Meyers? what makes him so good!

First and foremost, he's got great hands. I really liked his adjustment skills to find the nose of the ball cleanly and ensure, he's pulling in passes cleanly on the first attempt. he brings a lot of exciting hands catches with extending his catch radius.

He also has the really nice body control and an ability to contort back to the football, it doesn't seem like the guy plucks the ball off the rim, but he's got nice hops and the ability to time up asleep and snatched the ball aggressively out of the air.

Jakobi Meyers also has got great balance in good physicality to take a body blow and keep pressing up the field for extra yards, he uses his free arm well to catch himself and stay on his feet. he doesn't possess the most straight-line speed but is rather quick even quicker on tape than in testing.

He's still fairly green to receiver after coming into college as a quarterback, but his strides are really promising. it's just an ascending player who is still yet to reach the ceiling.

Finally, he's a great household player, he's always looking to sidestep a tackler or spin back against the green. Jakobi does well to use his frame and shield the football as it arrives on slants and works into the middle of the field, but let's take a closer look at his story because it's fascinating.

As a freshman, he redshirted for the Wolfpack team that was led by quarterback Jacoby Brissett after recovering from a knee injury, Meyers was switched to receiver a week before the second season started.

The result was not an overnight success though Meyers did appear in all 13 games for NC State that season, he caught just 13 passes as a redshirt freshman, but indeed begin to adapt to his new position.

In his second year as a wideout, Patriots WR Jakobi Meyers made 63 catches for over 700 yards and five TDs winning the most improved player on the team.

By his final season at NC State in 2018, Patriots Wide receiver Jakobi Meyers had become instrumental in the team's passing game. His 92 receptions put him in the top 10 in college football.

His story has also led him to get some comparisons to Julian Edelman. Well, it's obviously was premature to compare anybody to a player's accomplish as Julian.

In fantasy football, Jakobi Meyers is likely the most overlooked wide receiver. For the previous two seasons, the former undrafted free agent has been the Patriots' target leader, with his most recent accomplishment being finishing top-12 in target share (23 percent) in 2021.

Meyer's deployment in the Patriots passing attack coincided with the high-end target share, with Meyers running a route on 92 percent of team dropbacks, the sixth-highest number in the league.

To reach his fantasy potential, New England's top receiver simply needs to score more touchdowns. In that category, he has been underutilised; his 866 receiving yards and two touchdowns were the lowest of any wide receiver in 2021.

Read Also : Everything You Need To Know About Joe Thomas