MNF doubleheader in Week 2. Week 2 will feature Titans vs. Bills and Vikings vs. Eagles games in Monday Night Football doubleheaders.

Week 2 will feature Titans vs. Bills and Vikings vs. Eagles games in Monday night doubleheaders. 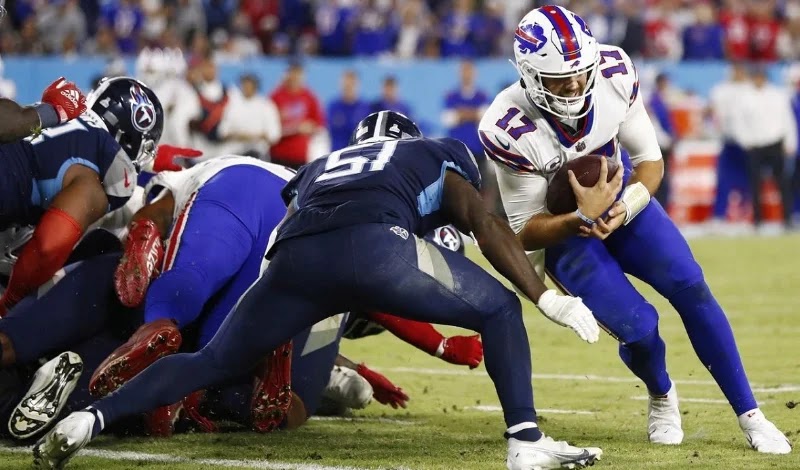 The Buffalo Bills and Tennessee Titans will square off on Monday night in Week 2 of the regular season in a Monday Night Football doubleheader that will be complemented by the Minnesota Vikings vs. Philadelphia Eagles game.

Two huge matchups on the slate for MNF in Week 2 this season! 👀

Tune in for the full schedule reveal on Thursday, 5/12 at 8pm ET on @nflnetwork pic.twitter.com/q53Bqid2X5

Little by little, details of the NFL schedule for the 2022 season, which will be officially announced on May 12, are becoming known.

For the time being, the NFL announced that Week 2 will feature a Monday night doubleheader, headlined by two of the strongest teams in the AFC last year, the Bills, and Titans, who met last season also on Monday Night.

In last year's Week 6 matchup, Titans running back Derrick Henry racked up 143 ground yards with three touchdowns in Tennessee's 34-31 win over Buffalo, which came up short on a fourth-and-goal opportunity when Josh Allen failed to convert on a quarterback sneak.

It will be the fifth consecutive season that Titans and Bills, two of the strongest teams in the American Conference in recent memory, have met, splitting wins in the four recent meetings.

How much will the Titans miss wide receiver A.J. Brown? That same day, Brown will have a prime-time appearance with his new team, the Philadelphia Eagles, when they host the Minnesota Vikings in the second game of the Monday night doubleheader.

The Eagles are 4-1 in their most recent five Monday night home games, while the Vikings have won two in a row on Monday prime time, both against division rivals the Chicago Bears.

We are getting closer every day to knowing the full NFL schedule, but for now, details are emerging, such as the Monday Night Football doubleheader for NFL Week 2. Related: Justin Jefferson : I was surprised when the Eagles didn't select me