After the final game of Ravens in 2018, Harbor said that in the offseason, the team will work twice as much on those issues that should strengthen the team's remote game led by Lamar Jackson. This mainly concerned maintaining control of the ball.

The team had just lost the playoffs in the playoffs and the most discussed was the great game plan from defense coordinator Gus Bradley. He stopped Jackson, allowing him to score only 194 yards (14 of 29) with two touchdowns and an interception plus 54 yards on the ground. Harbo also admitted that the team was considering replacing Jackson with Joe Flacco at a key moment in the season. Fans subjected Lamar to obstruction for his actions in much of that match.

It seemed that this game would put an end to the experiment with Jackson, given the conservatism of most of the team leaders, especially when it comes to atypical players.

"Well, we tried . " It was so easy to predict a future in which Lamar would be replaced in the eighth week of the 2019 season with some wandering from team to team backup, because he would give the team a better chance of winning .

Instead, Harbor continued to bend his line. Later, during the training camp, he suggested that Jackson and his attack could change the league's view of football, just as Bill Walsh and Joe Montana made everyone rethink the game in the 1980s. Baltimore has not just redoubled efforts to work on important technical issues. The club began to create conditions in which Lamar became one of the strongest players this season. 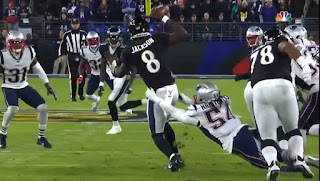 In Sunday's game against the Bengals, Jackson had the opportunity to sit on the bench for almost the entire fourth quarter after the score was 49-10. For the second time this season, he showed an ideal quarterback rating. Twice in one season, only Ben Roethlisberger achieved this, and Lamar still has half the championship ahead.

Jackson continues to actively engage his miniature (175 cm) novice receiver Marquise Brown. He continues to throw into narrow windows and into cover, which is almost not done by other young quarterbacks. He continues to mock at the defenses of his opponents, who, before each snap, wonder who will run with the ball this time, and breathe a sigh of relief if the choice is correct.

Harbor kept his promise and Jackson is among the contenders for this season's MVP. Soon, the time will come when the teams will look at what Baltimore is building and realize that the search for a quarterback similar to any of the successful resellers of the past is just a waste of time and resources. Why not choose the most talented player instead. A player who is currently undervalued due to outdated and conservative league standards.

Ravens and Jackson are changing our minds about many basic football concepts, forcing them to use vague terms such as action style to define their attack, which confuses the weakest defenses in the league.

All this deserves the closest attention, because other league teams can go the same way. A performance like Jackson just created to push the rest in the right direction.
Covers everything about NFL, NFL Draft, NFL News and Rumors, Super Bowl, best NFL players in history, best NFL players, NFL Mock draft and more. YouTube TV NFL.