Branch played fourteen seasons with the Raiders and won three Super Bowls with the team. He was one of the best receivers in the league of the 1970s. 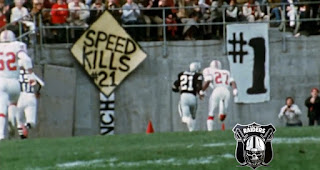 On August 1, 1948, Clifford Branch, Jr. was born in Houston, having played fourteen seasons with the Raiders and won three Super Bowls with the team. Branch was one of the best receivers in the league of the 1970s and includes a club of thirteen players who hit a 99-yard touchdown on a reception.

After graduating from high school, Cliff entered the University of Colorado at Boulder. He spent only two seasons with the college football team, averaging 655 yards with three touchdowns. Branch played as a receiver, but was also good on the carry-away, where he brought in five touchdowns. He also successfully demonstrated his best qualities on the track of the track and field athletics stadium. In June 1972, in the semi-finals of the NCAA Championship, Cliff ran the 100 meters in 10 seconds (while timing was kept using a hand-held stopwatch).

Related : 7 Fastest NFL Players You Will Ever See
By that time, Branch was already an NFL player, drafted in February 1972 by the Oakland Raiders in the fourth round. During the first two years of his career, he appeared on the field sporadically, totaling only 331 yards. Cliff's Star lit up in 1974. He landed a spot in the starting squad and thanked the coaches for their confidence by scoring 1,092 yards with 13 touchdowns. Both were the best in the NFL and earned him Pro Bowl and the first All-Pro squad. For the next three years, Branch remained one of the league's brightest players. In 1976, he renewed his personal best with 1,111 yards, and again became the best for the number of touchdowns on reception. Along with the Raiders, Cliff has won Super Bowls XI (20 yards), XV (67 yards and two touchdowns) and XVIII (94 yards with a touchdown). During his career, he played in 22 playoff games, where he made 73 receptions for 1,289 yards. For nearly a decade, these numbers remained league records, broken by Jerry Rice in 1993. In total, Branch played fourteen seasons in the NFL, gaining 8685 yards.

In 1985 and 1986 he suffered several injuries and left Oakland. Branch spent a little over a year on the sidelines. In early 1988, he returned to the field, signing a contract with the Los Angeles Cobras, which played in the Arena Football League. As conceived by the owners of the franchise, his name was supposed to attract fans to the stands, but the idea failed. Cobras matches averaged about 7,500 spectators, one of the worst numbers in the league. The team advanced to the playoffs from fourth place and lost to the Chicago Bruisers. In the semi-finals. After the end of the season, Cobras was disbanded. This was the end of Cliff Branch's football career. In 2004 and 2010, he was among the candidates for election to the Professional Football Hall of Fame, but both times remained only a semi-finalist. Raiders owner Al Davis has spoken repeatedly about.