Tunch Ilkin, the first Turkish played in the NFL, and left a mark on the history of the Pittsburgh Steelers.

Today is sixty-three years old Tunch Ilkin, the first Turkish-born to play in the NFL, and left a mark on the history of the Pittsburgh Steelers. 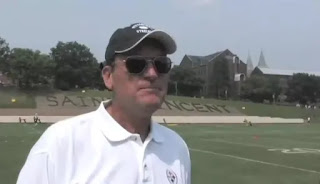 Tunch Ilkin, the first Turkish-born to play in the NFL, and left a mark on the history of the Pittsburgh Steelers.

Tunch Ali Ilkin was born in Istanbul on September 23, 1957. The family moved to live in the United States when he was two years old. He grew up in the suburb of Chicago's Highland Park, in his school years became interested in football, was a member of the national team of stars of the district. After graduation, Ilkin was offered an athletic scholarship at Indiana University. He had a solid college career in a star-to-be-starred program and was picked by Pittsburgh Steelers in the 1980 NFL Draft in the sixth round.

Unfortunately for him, Ilkin found himself on the team after the end of its Golden Age with four Super Bowl victories. The first three seasons with the Steelers Tunch was a backup, although he appeared on the field for most of the regular season games. In 1983, he became the main right Offensive tackle and did not give up that spot for ten years. Twice, in 1988 and 1989, Ilkin was chosen as one of the Pro Bowl participants. He also played a prominent role in league life, serving as vice president of the NFL Players' Association from 1989 to 1994. Tunch finished his career in 1993 with the Green Bay Packers, for which he played one match. In 2007, he was included in the Pittsburgh Steelers' symbolic team for 75 years of its history.

After finishing playing, he began his career as a commentator. Most of the time, Ilkin worked as an analyst on Pittsburgh television, and worked for one season on the NBC team. Now he works as vice president of a company that organizes training camps and their material support. Tunch continues to analyze the Steelers games on one of the Fox Sports subsidiaries. In 2013, he visited his historical homeland, where he took part in the activities of the Istanbul Cavaliers team and said that it was his dream to coach a football club in Turkey.