Alvin Kamara is the MVP. Is it Real?

There's no important player in saints offense now than alvin kamara, made him the perfect running back for NFL MVP 2020 Award. 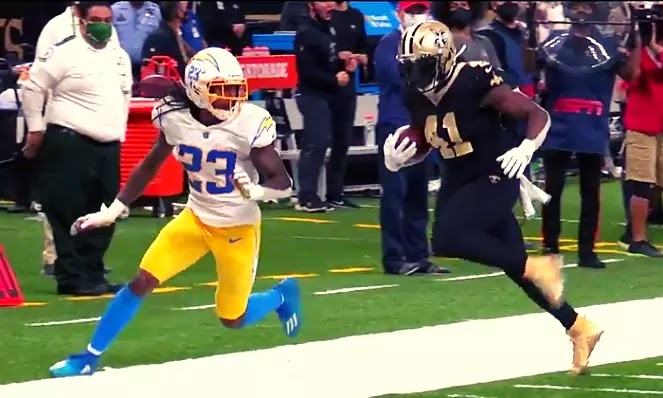 The first five weeks of the season with the Saints Running backs were great. So far, almost all the attention of journalists and fans goes to quarterbacks, but you shouldn't write off Kamara.

Is there a more important player in New Orleans offense now than him? Imagine Saints without # 41 in the backfield. Sad, isn't it? It is for this reason that he should be on the shortlist for the Most Valuable Player of this strange season.

Likewise, you could talk about Seattle Seahawks without Russell Wilson or Buffalo Bills without Josh Allen. The Saints are now 3-2, but where would they be without their running back? The MVP title primarily implies the level of influence of one or another player on the team as a whole. According to this criterion, Alvin Kamara is perfect!

For three weeks, New Orleans was forced to do without injured receiver Michael Thomas, Offensive Player of the Year last season. He recovered and was ready to play against the Chargers, but never entered the field. Thomas's conflict with teammate C Jay Gardner-Johnson prompted the coaches to leave him on the bench.

The Saints signed with Emmanuel Sanders to be the 2nd receiver. However, he has not yet established an understanding with Drew Brees. Tre'Quan Smith and Jared Cook in the passing game of the team so far are involved rather limited, although they distinguished themselves by touchdowns.

Against this background, Kamara stands out clearly, showing himself as a double threat weapon. He illustrates the wonders of Shuffle. In the second week of the Vegas game, Alvin scored 174 yards and made 9 receptions. Then against the Packers, he scored 197 yards, of which 139 were received. In the same game, Kamara scored two touchdowns.

He played an equally important role in the victory over Detroit Lions. In the last game against the Chargers, it was Kamara's fantastic catch that became the foundation for Taysom Hill's touchdown, which sent the meeting into overtime.

Last week, Saints tackle Terron Armstead compared Alvin to Black Panther, one of the characters in the Marvel Universe.

After five games played, Kamara is ranked number one in the NFL league for yards from the scrimmage line at 676. With 395 receiving yards, he is close to the top ten. In terms of the number of techniques, he is generally among the top three.

Much more important to the team is that Alvin can play at full strength. He spent the 2019 season almost on one leg with knee ligament injuries, but amassed a solid 1,330 yards from the scrimmage line. Now it is Kamara, and not Taysom Hill, who can be called the Swiss knife of New Orleans.

New Orleans Saints now the top of NFC Southern Division standings. Alvin Kamara is the main reason for this. At the same time, many continue to believe that any league running back can be easily replaced. Saints Leader proves by his example that people like him and Christian McCaffrey don't get their money in vain.

If Kamara keeps pace, he will end the year with a new league record for yards from scrimmage line. This should definitely make him one of the MVP award contenders. He is a special talent and deserves recognition.