The Super Bowl 2023 will take place on the night of February 12-13 at State Farm Stadium in Glendale, Arizona. The game begins at 6:30 P.M. ET.
Home
Carolina Panthers
Facts

Christian McCaffrey is an American football running back for the San Francisco 49ers of the National Football League (NFL). He played college football at Stanford, and was drafted eighth overall by the Panthers in the 2017 NFL Draft. Here's the Top 10 Facts You Didn't Know About Christian McCaffrey 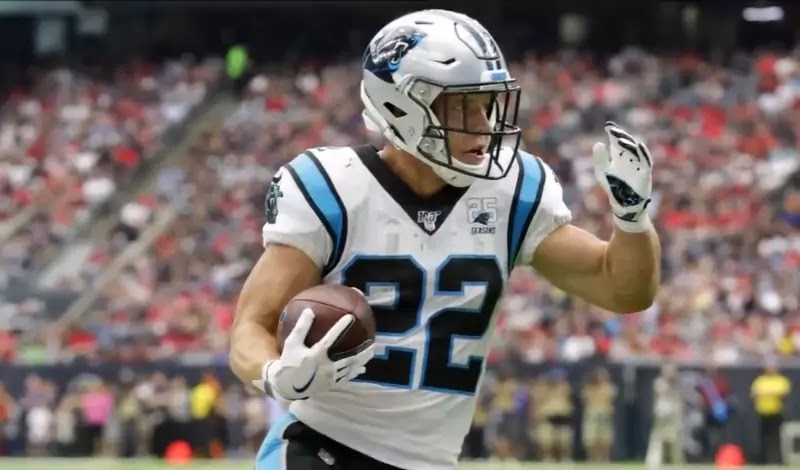 10. His mom and dad also went to Stanford.

Asked why he committed to Stanford when he had options like Notre Dame, Oregon, Wisconsin,Colorado, Florida State, and Nebraska, all power programs, McCaffery said his heart led him there, and that it felt like home when he visited. A huge part of this could be that both of his parents attended Stanford. His father, Ed McCaffery went there, between 1986 and 1990. His mother Lisa also went there; the two actually met while at Stanford. His mother once joked that she married his father so they could breed fast white guys. From the looks of Christian, looks like they succeeded.

He is one of the biggest breakout stars out of Colorado in the past few years. Even though he is best known for playing football as an NFL star, he also participated, and rather successfully so, in track and basketball. He stood out as a sprinter in his high school’s track and field team, excelling in both the 100- and 200-meter dashes at the Colorado High School Activities Association state meets. He was also a standout basketball player, helping the Valor Christian high school boys team reach the state semifinals twice in a row. He also has musical skills, and is reportedly an excellent pianist.

8. McCaffrey comes from a family of sportsmen.

His family is one of avid sportsmen and women. His father Ed, famously played football in college and went on to be drafted by the Giants in 1991 in the third round. Ed McCaffery played for the Giants for three seasons, before moving on to the 49ers and later to the Broncos, where he made the pro bowl. His mother Lisa excelled in soccer, starring for Stanford between 1987 and 1990.

His older brother Max also played football at Duke and for various NFL teams as a wider eceiver. His younger brother Luke is also a football player, a quarterback at the University of Nebraska. It does not stop there, though. Relatives on both his father and mother’s side have also been accomplished sportspeople. His grandfather, for instance, was once named the fastest human alive, breaking up to 9 world records in the sprint and low hurdles categories in the 1950s.

7. McCaffrey does not discuss his extended family in interviews.

6. He was the king of workouts in college.

While other athletes saw workouts as a necessary evil, with some actually getting in trouble for avoiding workouts, McCaffery is one of those athletes that actually relished workouts at that age. His strength coach Shannon Turley is known for trying to break all the recruits over the course of their first year with grueling fitness tests. In all his years of experience, McCaffrey was the first player he could never rattle. His responses were apparently like a navy seal, forcing the coach to design workouts especially for him.

5. McCaffrey skipped his senior season to enter the NFL Draft.

He made the decision to skip his senior season at Stanford, opting instead to enter the NFL Draft. He made the announcement in 2016, a decision that effectively saw him miss out on Stanford’s Sun Bowl appearance. This decision was met with mixed reactions, with supporters generally agreeing that it was a smart decision, and those opposed seeing it as a selfish move that would likely set a precedent for other college players.

4. He is rumored to be dating swimsuit model Olivia Culpo.

McCaffrey is a notoriously private person. He is however rumored to be dating swimsuit model and Maxim’s 2019 hottest woman Olivia Culpo. Rumors of this relationship, however, elicited a response from Olivia Culpo’s ex Danny Amendola. The Lions wide receiver apparently responded by posting a picture with McCaffery’s ex-girlfriend.

When he got into the league, he started working with a chef who helped him streamline his diet. He is however allowed some cheat meals, and one guilty pleasure he often ends up going for is Doritos. He basically loses his self-control with Doritos, and has confessed to being able to eat an entire king-size bag of Cool Ranch Doritos.

He had a huge season in 2015, breaking out as a sophomore that year. He managed to break Barry Sanders’ NCAA record which stood at 3250, finishing with 3864 yards. He was second in the country in terms of rushing yards with 2019, becoming the first-ever player at Stanford to rush for 2000 yards in a season. During his Stanford years, he also set such records as the most rushing yards and all-purpose yards in a single game. He also set further records in the Rose Bowl game in 2016 with a record 368 all-purpose yards.

1. McCaffrey is a staunch Christian.

He has stated before that one of the sources of motivation for him is his faith. He went to a Christian school, and has even spent time on international missions. In 2013, he spent the summer on a mission trip to Rwanda. Even his normal touchdown celebration, where he beats his chest and points up to God, shows his avid faith.