That's why the Green Bay Packers didn't pick the WR this year: Allen Lazard and his six receptions for 146 yards and a touchdown. 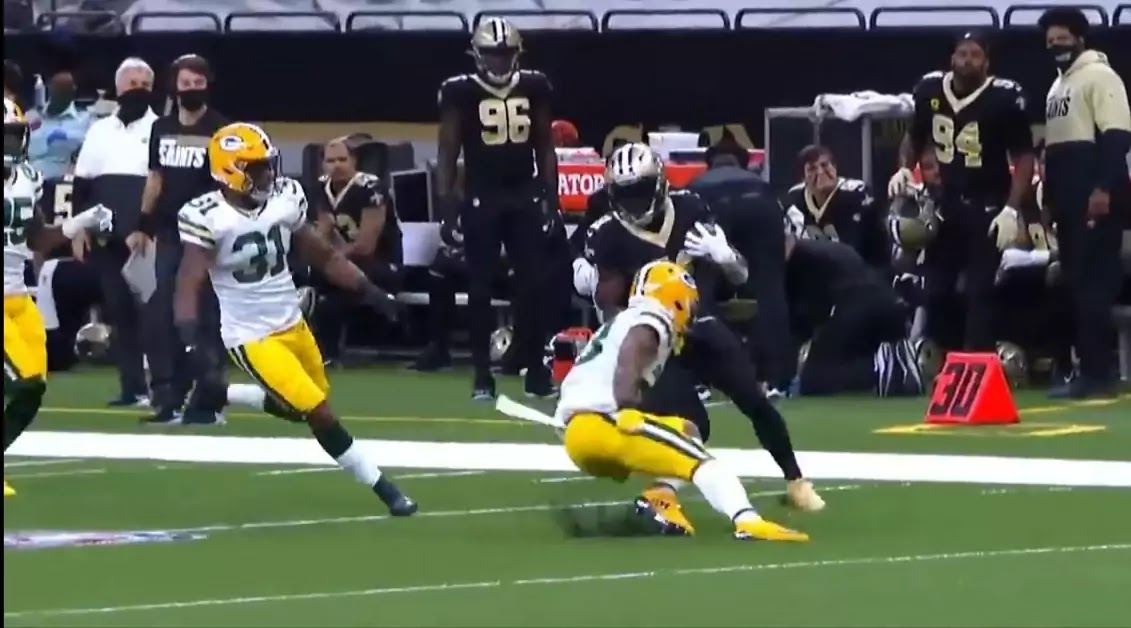 That's why the Green Bay Packers didn't pick the WR this year: Allen Lazard and his six receptions for 146 yards and a touchdown. Without bowler Devante Adams (receiver was eliminated with a hamstring injury) quarterback Aaron Rodgers has made No. 2 in the Receivers his prime target. And yes, Lazard proved himself worthy of this place in Sunday's 37-30 victory over the New Orleans Saints.

While his future Hall of Fame colleague, Drew Brees threw short passes at running backs, Rodgers took over the airspace over the Superdome in New Orleans. Lazard caught a 48 yards pass that flew 52.2 yards in the air. He surpassed those numbers with a 72-yard reception in the third quarter when the ball flew 52.3 yards in the air. According to statistics, Lazard is the only player this season to have a couple of successful moves in one game, before which the ball flew over 50 yards.

In three matches of the new season, Rodgers has caught up with the same number of long shots as last year. Now he has 5 of 7 accurate passes, after which the ball flew 50 yards or more. For the entire last season, he had 5 accurate passes in 22 attempts. Matt Lafleur's attack has become so dynamic that it seems that Adams is not particularly missed. The Packers are 3-0 this season and 16-3 in Lafleur's first 19 games as head coach.

Those who have asked for additional help to Rodgers might need to pay attention to the other side of the ball. If they could find someone to deal with Saints' running back Alvin Kamara, it would be more useful. Kamara's 52-yard catch-and-run touchdown was significant. Brees, as in most of the game, threw a short pass to Kamara to flat, and he evened the score, dropping five tackles along the way. One of them, from Will Redmond, could have stopped a runner without a set of yards.

The Packers' defense forced only three antlers. The defenders' best rally was in the final quarter, when Za'Darius Smith forced Taysom Hill to drop the ball and picked it up himself.

Defensive end Kingsley Keke wins the Breakthrough nomination. During a shortened training camp, he demonstrated progress in the pass rush, becoming the team's fifth most heads-up exercise won (47.4%). Note that this is an exercise in which it is easier for the offensive player to win. While Kenny Clark (groin ring injury) is healed, the second-year defender is taking back playing time. He recorded the first two sacks of his career - both in the first half, one of which came in an important third down. Last year, Keke played 94 snaps in defense for the entire season, this year he has 92.

An encouraging trend for the Packers, even when Aaron Jones isn't gaining as many yards as he did last week with 236 yards from the scrimmage line, he still breaks into the end zone. Jones demonstrated the power aspect of his game when he rammed into the home zone on the fourth down from the 1-yard line during the first draw of the third quarter. It was his fifth touchdown this season and his twenty-fourth since the start of last season, more than anyone in the NFL. The Saints have extended their streak, in which they do not allow one player to score one hundred yards on the run, to 46 matches. However, Jones, with his 86 yards and touchdown, did enough for the Packers to win.