The Super Bowl 2023 will take place on the night of February 12-13 at State Farm Stadium in Glendale, Arizona. The game begins at 6:30 P.M. ET.
Home
NFL
Super Bowl LV

Tom Brady: No more thoughts before tossing the trophy at the championship celebration

In the Tampa Bay Buccaneers’ championship cruise, Tom Brady threw the Lombardi Cup to his teammates on the ship, which was shocking.

In the Tampa Bay Buccaneers’ championship cruise, Tom Brady threw the Lombardi Cup to his teammates on the ship, which was shocking. Fortunately, the trophy was caught after it drew a beautiful arc in the air. 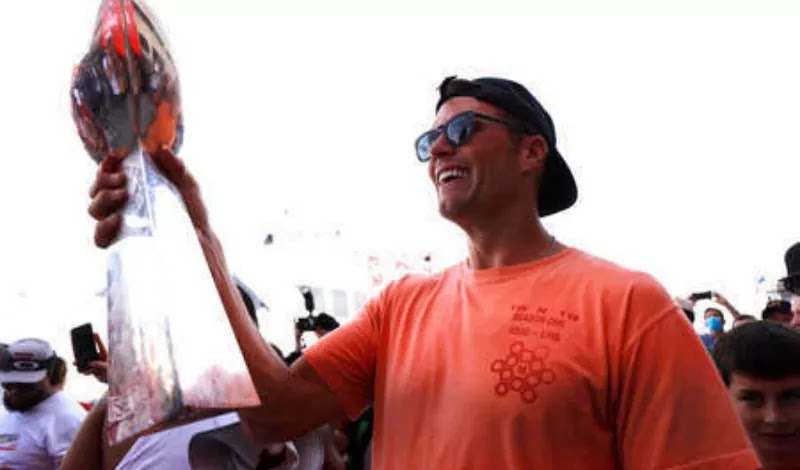 According to Brady, he didn't think much about it before deciding to throw the trophy to his teammates.

"First of all, I didn't think much about it at the time. There was nothing to worry about. At the time, I thought,'It looks really fun to do this,'" Brady said during a guest on "The James Corden Late Show. "Not to mention, when you pick up this kind of trophy, there are really sharp edges and corners at the bottom.... I later found out that if the throw was unsuccessful, the trophy would sink to a depth of 80 feet. I Glad Cam Brate received it."

The trophy is something outside of the body and can be replaced, but it is still a terrible possibility that the first championship trophy won by Brady after leaving the New England Patriots will sink to the bottom of the river. At least one person thought of such a possibility: Brady's 8-year-old daughter Vivian. In the video, she can be heard yelling "Dad, no!"

"Who would have thought that an 8-year-old girl was the clearest mind in the whole area?" Brady said. "She is the voice of reason. It's incredible."

In addition, Brady also mentioned that after the Super Bowl was over and he was determined to win the championship, he was looking for his family on the court. When his wife Gisele Bündchen and the children met him, Bundchen hugged him and asked a question.

"Suddenly I saw my wife, I gave her a big hug, and when I did, she said,'What else do you need to prove?'" Brady recalled with a smile.

Fortunately for the Buccaneers, Brady is ready to start defending his title in the 2021 season.