George Kittle is a tight end for the San Francisco 49ers in the NFL. He was drafted in the fifth round of the 2017 NFL Draft by the 49ers. Read Facts.

George Kittle is a tight end for the San Francisco 49ers in the NFL. He was drafted in the fifth round of the 2017 NFL Draft by the 49ers. Here's the 10 Facts You Didn't Know About George Kittle. 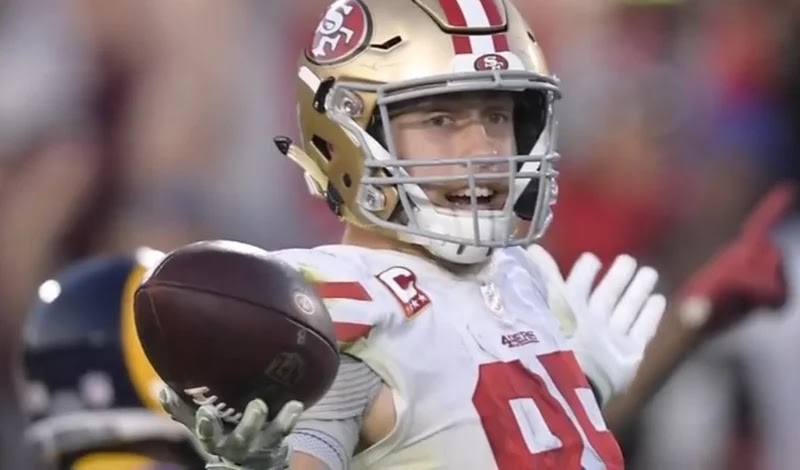 Kittle is an Iowa native, having moved there at a young age from Wisconsin.

The Kittle name has for the past decade or so been popular in Iowa, and while George is clearly the more famous one now, his father Bruce is also known in the area.

He was an offensive lineman at Iowa University, a four-year letterman and the co-captain of the Rose Bowl team of 1982.

His father is not the only one who has had success in sports. His mother Jan was a pretty good basketball player. She was a star athlete at Winfield-Mount Union and is in the Iowa Girls’ High School Athletic Union Hall of Fame. She was an All-American player, going on to star at Drake and setting various records along the way.

Kittle’s sister Emma played volleyball at Iowa, while his cousin Henry also played tight end for Iowa, part of the same team he debuted into.

8. George Kittle got offers from the Air Force and Navy.

Skilled players of Kittle’s caliber often get a barrage of scholarship offers from the best universities around.

In Kittle’s case, the options went beyond the usual suspects. He got offers from several of the big 12 schools, but unlike most football prospects, he also had offers from the Air Force and Navy.

He eventually ended up choosing Iowa, passing on a chance to be a walk on and play under his father in Oklahoma.

When he got to high school, he was first enrolled at the Iowa City West High School. He would then transfer to Cedar Falls High School in Cedar Falls Iowa, before finally graduating at Oklahoma’s Norman High School.

Many football players transfer schools in high school as schools are looking to land the best prospects. In Kittle’s case, things worked out for the best and he eventually returned home to The University of Iowa for college.

6. George Kittle was a two-sport star in high school.

He was 19th on the Super 30 list of top football prospects from the state of Oklahoma for his class.

In his senior year, he had 370 yards and 6 receiving touchdowns for Norman High School. He, like many other NFL players, also dabbled in other sports in high school.

He was particularly focused on basketball and was a standout player for the Newman Tigers.

5. George Kittle is a huge fan of Panda Express.

Responding to a tweet about consistency, he stated that he has consistently eaten at Panda Express, describing the experience as a perfect thing.

A few fans went after him, jokingly denouncing him on account of his culinary preferences. In his characteristic boldness, he doubled down on this and still swears by Panda Express.

Kittle, like many football fans, is also a huge fan of the fantasy TV series Game of Thrones. He is a pretty happy and positive person, with fans and teammates often wondering what puts him down.

The answer to that, it seems, would be Game of Thrones. He once got quite agitated describing the disappointments of the final season when a 49ers employee brought it up, leaving everyone surprised.

He has also admitted to enjoying Harry Potter and Lord of the Rings. Sam and Frodo are his favorite Lord of the Rings characters. He fell in love with them as a young boy, when his father would read him the books and tell him stories of the mystical Aragorn.

Kittle’s love for TV and film is fanatical. He has a tattoo of Heath Ledger’s Joker on his arm and has expressed his feelings about loving Mark Hamill’s Joker character.

He stores classic Batman cartoons on his phone for the road trips and often slaps the tattoo while on the field to get focused.

This behavior comes from his time in Iowa when he would put a piece of red tape on his arm, a sort of reset button that he would often hit after a mistake.

To him, football is as much a mental game as it is a physical one, and the difference between him and other talented players is often the small mental edges.

2. George Kittle is married to Clare Till.

He married his long-time girlfriend Clare Till in April of 2019. The two met at the University of Iowa, where Clare also played basketball.

Clare and Kittle have dated for a long time, and when it finally came time to propose, he had the 49ers photographers organize a fake photoshoot for him.

He invited his girlfriend, proposed on the beach, and the rest, as they say, is history.

The night before every game, he likes to spend up to three hours by himself.

During this time, he meditates, takes a salt bath, and visualizes how the game is going to be.

According to his father, he has been doing this since he was 5 years old. He believes the visualization makes the challenges on game day easier to deal with.

In 2022, George Kittle is expected to have a net worth of $3 million. At first glance, it may not appear that he has much money.

The 49ers tight end will earn $15 million a year for his new contract. That puts him in the top one percent of American income earners.

Despite Kittle’s current net worth, his true worth is much greater than that. He has become one of the world’s highest-paid athletes despite being drafted from the bottom of the league.

This new contract he just arranged for himself will likely help this 28-year-old enhance his riches.

Because of his fame away from the field, Kittle can also secure endorsement deals.

The San Francisco 49ers have signed George Kittle to a five-year, $75 million contract.

Each season, TE George Kittle earns $15 million on average, with a total guaranteed value of $40 million on his contract. He was given a nice $18 million signing bonus when he signed a contract extension.

After receiving a $2.69 million rookie contract, Kittle is now on his second big deal. He also received a signing bonus of $298,287 after being selected in the fifth round of the 2017 NFL Draft.

After the 2026 season, The 49ers TE George Kittle will be able to renegotiate his contract. He has a good chance of getting a better job in the future and earning more money than he does now.

That’s All 10 Facts You Didn't Know About George Kittle, tell us who you think is better, George Kittle or Travis Kelce?