Tyreek Hill is an NFL player who plays as a wide receiver and as a return specialist for the Kansas City Chiefs, Here's the Top 10 Facts.

Tyreek Hill is an NFL player who plays as a wide receiver and as a return specialist for the Miami Dolphins. He was drafted by the Chiefs in 2016 and has since become a valuable member of the team. Here's the Top 10 Facts You Didn't Know About Tyreek Hill. 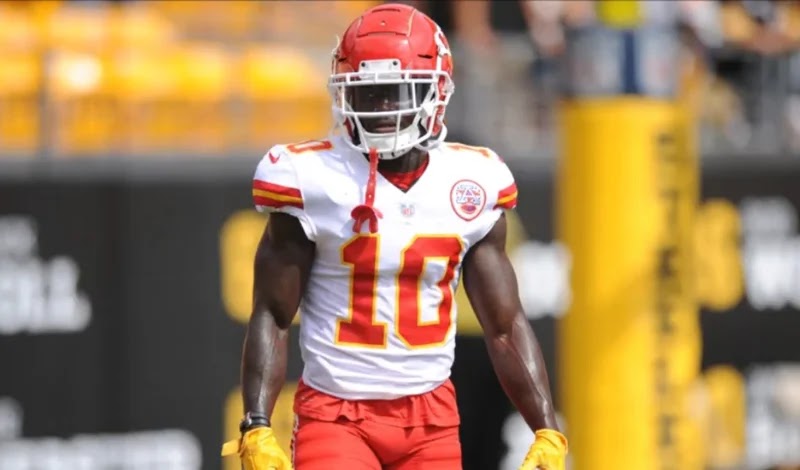 10. Long before being drafted by the Kansas City Chiefs, Tyreek Hill was an all-purpose back at Garden City College in Kansas.

The small junior college allowed Hill to develop and showcase his skills for D1 coaches around the country. Hill looked likely to sign to Florida State coming out of Garden City, but chose the Oklahoma State Cowboys instead.

Hill had been recruited by Arizona, Alabama, Nebraska, and several other top D1 schools. His decision to join Oklahoma State was a surprise with other top schools showing interest.

9. In October of 2019, the Chiefs signed Tyreek Hill to a three-year, $54 million contract extension.

The move came despite the team knowing Hill’s laundry list of criminal issues that dated back to his time in college. Hill had played college football for Oklahoma State after two years in junior college, but left after just one year thanks to a domestic violence charge.

The charges were filed by his pregnant girlfriend, Crystal Espinal, who claimed Hill choked her and punched her in the stomach. He received three years’ probation for the incident. The couple may have split for a short time, but got back together later on. The trouble between them did not stop.

8. After leaving Oklahoma State University due to dismissal by the team, Hill joined tiny West Alabama.

WR Tyreek Hill played one season for the Tigers before entering the 2016 NFL Draft. The Chiefs, despite knowing Hill’s criminal issues, drafted the wide receiver in the fifth round as the number 165th player taken.

At the time, a large number of Chiefs fans were upset with the drafting of Hill. It is likely those people are no longer as upset as Hill plays a major part in the teams offense.

7. Growing up in Georgia, Hill faced a number of challenges, which is likely part of the reason he has had criminal issues as an adult.

His grandfather, Herman, who the wide receiver was raised by, was a suspect in 16 criminal cases from 1989 to 2016. Herman was alleged to have physically beaten a woman at one point, but she no-showed in court, leading to the charges being dropped.

Not only did Hill grow up with a grandfather that spent time in jail, but he grew up in poverty-stricken Pearson, Georgia. Forty percent of the small town’s population lives under the poverty line.

6. Tyreek Hill donated 6,000 meals to families affected by the coronavirus.

Although Hill has made headlines for all the wrong reasons throughout his career, he made positive headlines in March of 2020.

Hill donated 6,000 meals to families affected by the Corona virus. The wide receiver then challenged his Kansas City Chiefs teammates to do the same. The donations were part of the wide receiver’s “Tyreek Hill Foundation.” The foundation’s goal is to provide life enrichment, life skills, and educational opportunities to those struggling to gain them.

5. During the NFL’s 2020 offseason, Tyreek Hill shared his workout routine with followers on social media.

One of the surprising additions to his offseason workouts that raised eyebrows amongst NFL fans was that of yoga. Yoga has become a popular, low-impact workout amongst pro athletes in recent years and Hill is now a convert.

Hill wrote on social media that yoga is “much harder than it looks”. The addition of yoga allows Hill to work on his flexibility and breathing. It is also designed to help his muscles last longer in the high-impact world of the NFL.

4. The Kansas City wide receiver has had stormy romantic relationships in the past, but is now looking to settle down in calmer waters.

In December of 2020, it was revealed that Hill and Keeta Vaccaro are dating. The two made their relationship official by posting images on their respective Instagram accounts.

Who is Keeta Vaccaro?

For starters, she is the sister of Tennessee Titans player Kenny Vaccaro. She is also a self-professed entrepreneur and runs “1996 the Label organization.” She is also the CEO of Misurare by Vaccaro.

3. Tyreek Hill is considered the fastest player in the NFL.

According to the Sporting News, Hill runs a 4.29 40-yard dash. Of course, running with a ball in your hands is very different than running a straight 40-yard sprint and Hill continues to be one of the best with a football in his hands.

Tyreek Hill earned the nickname “the Cheetah” due to his blazing speed.

In November of 2019, Hill displayed his speed when he ran down teammate Damien Williams on an incredible 91-yard touchdown run against the Minnesota Vikings. According to Next Gen Stats, Hill hit 22.6 miles per hour, the fastest sprint of his career.

2. In March of 2019, it was reported that Tyreek Hill was involved in a physical altercation with his son.

The altercation allegedly led to the three-year-old boy’s arm being broken. The incident led to a child abuse investigation of Hill and his former fiancée Crystal Espinal. The Kansas Department for Children and Families investigated the duo and found that they were not the cause of the child’s broken arm.

After a month of investigations into the child abuse allegations, both Hill and Espinal were cleared of wrongdoing.

However, a tape emerged with Hill menacingly telling Espinal that she should be afraid of him.

1. Hill and Espinal had a rocky relationship to say the least.

It is alleged that Hill was investigated for child abuse due to Espinal blaming him for their three-year-old's arm-break. The couple had a number of domestic abuse issues over the years before the 2019 incident with their son.

In 2015, Hill pleaded guilty to choking Espinal while she was pregnant. In July of 2019, after the couple had split up, Espinal gave birth to twins. Shortly after the twins’ birth, Espinal filed for paternity with Tyreek Hill.

That’s all 10 Facts You Didn't Know About Tyreek Hill, tell us where you would rank Tyreek Hill among the best wide receivers in the NFL!