Jalen Ramsey is one of the best cornerbacks in the NFL, He Plays for the Los Angeles Rams and played college football at Florida State. Ramsey was drafted by the Jacksonville Jaguars with fifth overall pick in the 2016 NFL Draft. In 2019, the Rams traded a fourth round pick and two first round picks for CB Jalen Ramsey. Here's the 10 Facts You Didn't Know About Jalen Ramsey. 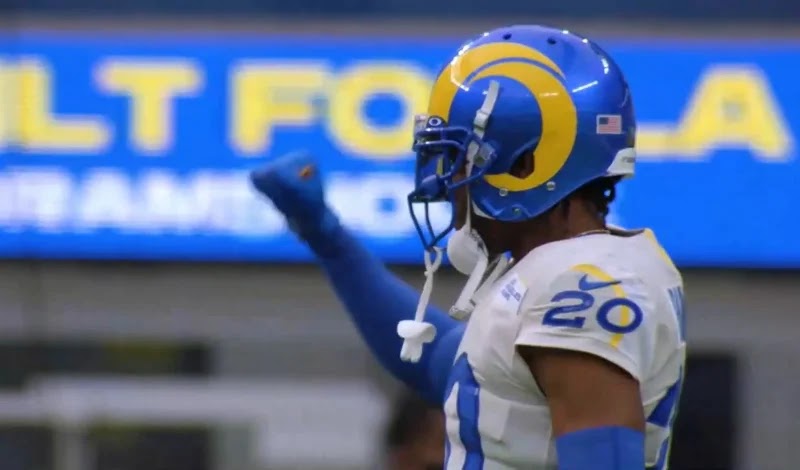 He went to high school in Nashville, Tennessee at Ensworth High School. High school for most football stars often involves a transfer or two, and for Ramsey, he later transferred to Brentwood Academy.

After an injury-stricken tenure in Ensworth, he succeeded at Brentwood, ending up as a five-star recruit according to both rivals.com and scout.com. He was also one of the top recruits overall in his class.

9. Ramsey brought back the jersey number 17 out of retirement at Florida State.

He chose Florida State and played for the Seminoles, initially wearing number 13 as a true freshman.

He, later on, switched to number 8 for his sophomore and junior years. He, however, chose the jersey number 17 during his junior year for kick-returns.

The jersey number 17 had been retired in honor of former Florida State superstar Charlie Ward, but Ward granted Ramsey permission to wear the number.

8. He was a three-sport star in high school.

Apart from football, in which he excelled, he was also a pretty good basketball player and track-and-field athlete.

Teachers at his former high school call him one of the most complete athletes they have ever seen.

He competed in the two-day decathlon for Brentwood, an event that includes a 100-meter dash, the triple jump, pole vault, discus, and a 400-meter run on the first day, and hurdles, shot put, long jump, high jump and a 1500-meter run on the second day. He also won state titles in the 200, 400, decathlon, and long jump.

In basketball, he never competed as part of the team, but he took part in dunk contests.

7. Ramsey does not shy away from trash talk and banter.

He is known for always offering his unfiltered opinions on the game and on other stars in the NFL.

In the past, he has often had altercations with other players as a result of his trash talk, including players like A.J. Green in 2017 and later Tyreek Hill in 2018.

He never shies away from this, and has criticized such star players as Joe Flacco, Eli Manning, and Josh Allen in interviews.

6. He changed his college commitment from USC to Florida State.

Coming out of high school, he had initially committed his future to USC. He committed himself to the USC Trojans in July of 2012, but was still considering Florida and Florida State as potential options.

Florida State eventually won the battle for the cornerback, with Ramsey canceling his USC commitment after a late visit to Florida State.

This did not come as a surprise for many though, as Ramsey still took official visits in the last month leading up to signing day.

5. Ramsey has had to deal with gay rumors.

He has in the past had to battle rumors that he is gay. In an interview speaking about his war of words with the now-retired wide receiver Steve Smith, fans apparently noticed his non-verbal language and attributed this to his sexuality.

He apparently was pictured rolling his eyes, shrugging his shoulders and moving his head while talking, behaviors that fans stereotypically attributed to him being gay.

This interview prompted a wave of speculation on social media, with some fans going as far as leaving homophobic comments under his posts.

Though it is unclear when their relationship started, Tate and Ramsey were together for a long time. Tate is the sister to Giants wide receiver Golden Tate.

Their relationship flourished in past years, but they recently hit a snag after Ramsey left Tate, while pregnant, for another woman.

This decision reportedly angered Golden Tate, who did not hesitate to express this when asked about the whole saga. Ramsey and Breanna Tate went to the same high school.

He was so good that after a particularly impressive performance at the NFL combine, Sports Illustrated wrote that he had the chance to become the number 1 overall pick.

Debate raged about whether he was the top player in the draft, and whether other players could stand up to him in terms of skill and performance.

2. He comes from an athletic family.

His father is now a firefighter but before then, he played college football, something that might have been an inspiration for Jalen’s interest and prowess in football.

Given his family interests, Ramsey has always known that he would be a football star, once famously quipping that he knew he would play in the NFL straight out of the womb.

1. Ramsey had an unusual way of riling up opponents in college.

Psychological warfare is a crucial part of sports. Many players believe one of the ways of getting one-up on the opposition is to speak about them before the game.

Ramsey, however, went a step further in his efforts to throw opponents off their game in college. He would send private messages to their girlfriends the week before the game.

Even though many believe that going after opponents’ family and significant others is crossing the line, Ramsey has often made it clear that he loves to trash-talk, and will go after almost anyone he feels like.

He would then bring up the fact during the game, a tactic that seemed to have worked for him against the opposing wideouts.

That’s all 10 Facts You Didn't Know About Jalen Ramsey, tell us if you think Jalen Ramsey is the best cornerback in the NFL!