Matthew Stafford is the starting quarterback for the Los Angeles Rams football team. He also played for the Detroit Lions and Georgia Bulldogs, he is one of the top QBs in the 2009 NFL Draft and I believe he is going to be an elite quarterback in the NFL. Here's the 10 Facts You Didn't Know About Matthew Stafford. 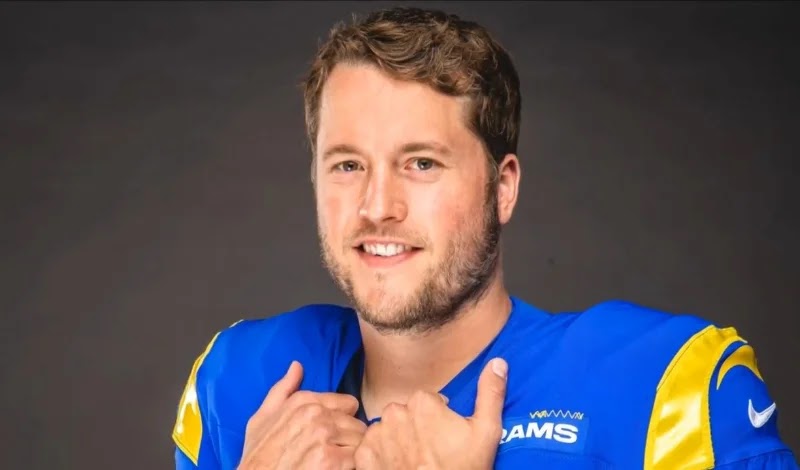 10. Stafford was a high school quarterback phenom at Highland Park High School and plenty of football onlookers knew the Texan would be a star someday.

ESPN’s Mel Kiper Jr. was so impressed with Stafford while the Los Angeles Rams quarterback was in high school, that the football pundit stated the future Rams signal caller would be a No. 1 draft pick in the NFL. Stafford fulfilled Kiper’s prediction in 2009 when the Detroit Lions selected him first overall.

9. Every season, Stafford purchases his offensive linemen and fellow quarterbacks a gift.

It is Stafford’s way of saying thank you for protecting me. In 2014, while playing for the Lions, Stafford bought the team’s linemen and quarterbacks each a Big Green Egg Grill.

Not only did Stafford buy each member of the team’s O-line a Big Green Egg Grill, but he purchased them for the Lions’ practice squad offensive linemen too. He bought over 12 of the expensive grills that season for his teammates.

8. When Stafford was traded to the Los Angeles Rams in 2021, it gave him the opportunity to reconnect with his childhood friend Clayton Kershaw.

Kershaw is one of Major League Baseball’s top pitchers and he most recently played for the LA Dodgers. Stafford and Kershaw grew up in Texas and the pair played sports together.

At one time, Kershaw played center while Stafford was the quarterback for their high school football team.

Kershaw chose baseball over football because he didn’t like playing on the offensive line. According to Kershaw, he didn’t have the skillset to play anywhere else on the football team.

7. Stafford committed to the Georgia Bulldogs football program in May of 2005.

Which players ranked higher than Stafford nationally in the 2006 recruiting class?

Andre Smith, Percy Harvin, Vidal Hazelton, Sergio Kindle, and Myron Rolle all ranked higher than him. Stafford is the only one of the top-six from that year’s recruiting class to still be playing in the NFL.

6. Georgia was not the only major university interested in Stafford.

Florida State, Oklahoma, and Michigan were on the quarterback’s radar. Stafford chose Georgia because it gave him the opportunity to play in a pro-style offensive system.

In addition, Georgia was willing to play Stafford from the day he stepped onto the campus in Athens.

Although Stafford had plenty of ups and downs early on with the Bulldogs, the opportunity to play from the beginning of his Georgia career led to his final decision to play for the university.

His selection as the No. 1 pick came just months after leading Georgia to a 24 to 12 Orange Bowl win over Michigan State and being named the MVP of the game.

The Detroit Lions selected Stafford with the hope that the quarterback would transform the franchise into a Super Bowl contender. However, after 12 seasons with the Lions, Stafford felt like the franchise was as far as ever from the Super Bowl.

Just four of Stafford’s seasons in Detroit finished with the Lions having a winning record. The Lions made the playoffs in just three of those four winning seasons.

After the end of the NFL’s 2020 season and a 5-11 record in Detroit, Stafford and the Lions decided it was time to move on. Rams QB Matt Stafford claims he never wanted to leave Detroit, but the appeal of winning the Super Bowl was too great to turn down a trade.

She is the sister of former NFL wide receiver Chad Hall. Chad played for the Philadelphia Eagles, San Francisco 49ers, and Kansas City Chiefs between 2010 and 2013.

Kelly was born on August 5, 1989, and met Stafford while the two attended the University of Georgia. She was a cheerleader for the Georgia Bulldogs. Currently, Kelly hosts her own podcast, The Morning After with Kelly Stafford. The couple has four daughters.

3. Stafford’s wife, Kelly, wanted to ensure the LA Rams had home-field advantage over their archrivals, the San Francisco 49ers, in the NFC Championship Game at SoFi Stadium in January of 2022.

The 70,000-plus seat stadium is regularly packed to the heavens for Rams games. Yet, there was plenty of worries that the 49ers supporters would be able to buy up tickets courtesy of outlets such as Ticketmaster and second-hand sellers.

To keep San Francisco fans out of SoFi Stadium, Kelly bought up a number of tickets from Ticketmaster.

On Kelly’s The Morning After podcast, she claimed to have purchased 240 tickets for fans. Although Kelly didn’t say exactly how much money she spent on the tickets, she said the tickets ranged in price from $850 to $1,200 each.

2. In November of 2021, Kelly Stafford made headlines around the NFL after an incident inside the San Francisco 49ers’ stadium.

Kelly allegedly threw a pretzel at a 49ers fan. The incident occurred after Kelly became upset over the way in which a group of 49ers fans were treating a tour crew member.

On her podcast, Kelly apologized and stated she attempted to buy food and drinks for the people she threw the pretzel at, but they refused her offer. Kelly also claimed she wouldn’t attend 49ers games anymore.

1. The Staffords experienced a very scary moment in 2019 when a tumor was detected in Kelly’s head.

She had been suffering from vertigo for several months when an MRI found a tumor on her cranial nerve.

Kelly’s official diagnosis was “acoustic neuroma or vestibular schwannoma.” Kelly underwent surgery that was supposed to take six hours, but the operation’s duration was 12 hours in total to remove the tumor. It was a successful operation.

You can read other facts about :
Not the best but still good.