The Super Bowl 2023 will take place on the night of February 12-13 at State Farm Stadium in Glendale, Arizona. The game begins at 6:30 P.M. ET.
Home
Facts
Green Bay Packers

Aaron Rodgers is an American football quarterback for the Green Bay Packers of the National Football League. He was drafted in the first round (24th overall) of the 2005 NFL Draft. He played college football for the California Golden Bears. Packers QB Aaron Rodgers is a Super Bowl champion, winning Super Bowl XLV and was the Most Valuable Player of Super Bowl XLV. Here's the 20 Facts You Didn't Know About Aaron Rodgers. 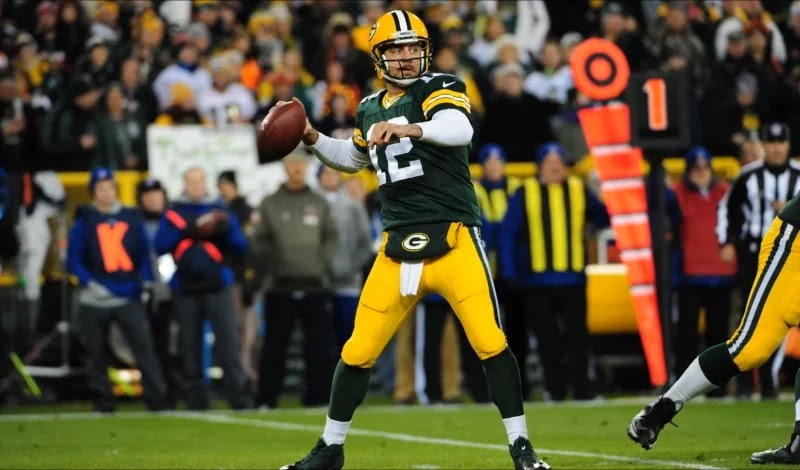 20. Rodgers said when he was growing up, “I used to draw little plays on note cards and dream I was Joe Montana throwing passes in the backyard with [my] dad.”

Edward, his father, told “The New York Times” that Aaron gets his “nimble feet” from his mother, Darla, who was a dancer.

19. Although Rodgers lives in Wisconsin, a state that is widely associated with cheese, he said that he cut dairy products out of his diet.

Since his knee surgery in January 2016, he said he has followed “more of a vegan diet with some red meat at times and some chicken.”

He also said he has tried to stick more to fruits and vegetables – “mostly vegetables.”

18. Whenever he scores a touchdown, he does a championship belt celebration.

QB Aaron Rodgers said that the move originated when he was Brett Favre’s backup. He does the move to motivate players on the practice squad.

17. Since 2006, Rodgers has photobombed every Packers captains’ photo taken.

His photobombing skills were featured on a short documentary on NFL.com.

In the film, he said one of his goals was to photobomb Selena Gomez and Justin Bieber on the red carpet.

16. He is friends with Brian Baumgartner, who is best known for playing Kevin Malone in the American adaptation of “The Office.”

Baumgartner attended a game at Lambeau during the 2013 season, and Rodgers attended his wedding in 2014.

The two were partners in a restaurant group 8-Twelve, which are their two jersey numbers.

In 2013, Braun had failed a test for performance-enhancing drugs and was facing suspension.

Rodgers took to Twitter to defend Braun, claiming the truth would win out and Braun would be vindicated. He was so sure Braun was telling the truth that he said, “I’d put my salary next year on it.” Braun would go on to fail another test and accept a suspension.

Rodgers had to face up to an unfortunate reality, but he didn’t pay out his multi-million-dollar salary.

After Braun’s admission to using performance-enhancing drugs, the two are no longer connected in a business relationship.

14. Aaron Rodgers has a love for music, which led him to become a self-taught guitarist.

He jams with a few teammates, and he even plays in bars in Green Bay every now and then.

The musicians he attempts to emulate are Ben Harper, Keith Urban, and Jack Johnson.

In 2009, he began his own record label, Suspended Sunrise Recordings, with his friend Ryan Zachary, to give musicians an opportunity to make their dream become a reality. They signed their first band, The Make, in 2011.

Rodgers once said that he likes the band, One Direction, and that Harry Styles told him that he was a Packers fan.

Quarterback Aaron Rodgers likes “South Park” and “Happy Gilmore.” He is a huge “Star Wars” fan, and he wore his Obi-Wan Kenobi robe before the release of “Star Wars: The Force Awakens.”

12. When Rodgers and Olivia Munn were in a relationship, Munn was asked about their game-day sex habits.

She said there wasn’t a rule, but it just didn’t happen because there were other things to focus on.

She said after games she would sometimes have sex with him, but it depended on how lateit was. She also said that she tried to have sex as much as she could.

11. His brother Jordan won “The Bachelorette.”

Jordan and Aaron haven’t talked for two years. He and the rest of his family don’t actually talk to Aaron.

The estrangement is reportedly due to Aaron not going to his grandfather’s funeral, who he “once called before every game.” He was also supposed to be a groomsman in a close friend’s wedding, but he bailed the day before the wedding via text.

There were also reports that Olivia Munn was also a reason for the family’s disconnect. Jordan accused Munn of not allowing Aaron to spend time with his family.

According to ET Online, “The family was told they were no longer welcome in Green Bay. If dad [Edward] wants to attend a game now, he buys tickets on StubHub or goes through another player’s family.” His father claimed that fame changed him.

10. QB Aaron Rodgers was born in Chico, California, and he is the son of Darla Leigh Pittman and Edward Wesley Rodgers.

Aaron Rodgers' father is a Texas-born chiropractor who played football as an offensive lineman for the Chico State Wildcats from 1973 to 1976.

9. His father would toss a football around with him and his two brothers, Luke and Jordan.

His father told them not to drink and not to party in college or they would limit themselves in sports like he did. Aaron took this advice to heart.

At the age of ten, he was featured on the front page of the “Ukiah Daily Journal” for his top performance at a local basketball free-throw competition.

His family returned to Chico in 1997, and he attended Pleasant Valley High School, starting for two years at quarterback and garnering 4,421 passing yards.

He graduated from Pleasant Valley High School in the spring of 2002.

7. He attracted little interest from Division I programs.

In a 2011 interview with “E:60”, he attributed the relative lack of attention in the recruiting process to his unimposing physical stature as a high school player at 5'10" and 165 lbs.

Packers QB Aaron Rodgers wanted to attend Florida State and play under Bobby Bowden, but was rejected. He garnered only an offer to compete for a scholarship as a walk-on from Illinois. He declined the invitation and considered quitting football to study for law school.

6. Rodgers was then recruited to play football at Butte Community College in Oroville, a junior college about 15 miles southeast of Chico.

Aaron Rodgers threw 26 touchdowns in his freshman season, leading Butte to a 10-1 record, the NorCal Conference championship, and a No. 2 national ranking.

While he was there, he was discovered by California Golden Bears’ head coach Jeff Tedford.

Tedford recruited Rodgers and because of his good high school scholastic record, he was eligible to transfer after one year of junior college instead of the typical two.

5. As a junior college transfer, he had three years of eligibility at Cal.

Quarterback Aaron Rodgers was named the starting quarterback in the fifth game of the 2003 season.

As a sophomore, he helped lead the Golden Bears to a 7-3 record as a starter.

In 2003, he tied the school season record for 300-yard games with 5, and he set a school record for the lowest percentage of passes intercepted at 1.43%.

As a junior, he led Cal to a 10-1 record and a top-five ranking at the end of the regular season, with their only loss at No. 1 USC.

After Texas was picked over Cal for a Rose Bowl berth, the fourth-ranked Bears were awarded a spot in the Holiday Bowl, which they lost to Texas Tech, 45-31.

Rodgers decided to forgo his senior season at Cal and enter the 2005 NFL Draft.

4. Before the draft, Rodgers was confident that he would be drafted to the team he supported and grew up near, the San Francisco 49ers, who possessed the No. 1 overall pick in the draft.

The 49ers, however, drafted quarterback Alex Smith instead, and Rodgers slid all the way down to the 24th overall pick by the Green Bay Packers. He has said that he experienced much angst and restlessness when waiting to be selected several hours into the draft, as he had expected himself to be selected much sooner.

With the loss, he lost a bet he made with the music group Boyz II Men, and he had to wear an Alex Smith jersey during the next week of practice. Had the Packers won the game, Boyz II Men would have sung the national anthem during their next home game at Lambeau.

Jordan briefly spent time with the Jacksonville Jaguars and later with the Tampa Bay Buccaneers.

Rodgers was in a relationship with actress Olivia Munn from 2014 to 2017. He has appeared on numerous television commercials, most commonly State Farm Insurance commercials, but he has also been featured in Pizza Hut advertisements as well. He has also participated in many Wisconsin-based advertisements.

1. Rodgers is the co-creator and founder, with David Gruber, of itsAaron.com, with a mission of “creating awareness for organizations and people who are changing the world.”

NFL QB Aaron Rodgers is also a strong supporter of the MACC Fund, RAISE Hope for Congo, and other humanitarian and charitable efforts.

Rodgers raised $50,000 for the MACC Fund as the winning contestant on an episode of “Celebrity Jeopardy” that was broadcasted on May 12, 2015. He triumphed over fellow contestants, astronaut Mark Kelly and “Shark Tank” panel member and entrepreneur Kevin O’Leary to raise the funds.