Colin Rand Kaepernick (born November 3, 1987) is a former American football quarterback for the San Francisco 49ers of the National Football League (NFL). Kaepernick was drafted by the 49ers in the second round of the 2011 NFL Draft. Here's the 20 Facts You Didn't Know About Colin Kaepernick. 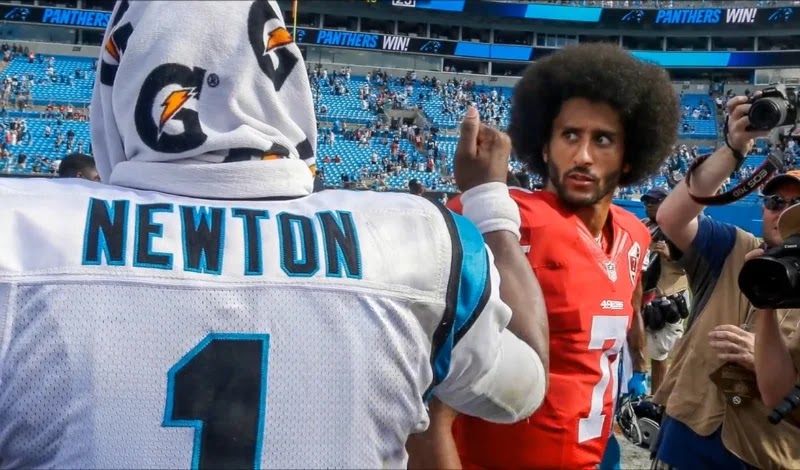 20. Colin Kaepernick grew up as a Packers fan, and he idolized Brett Favre.

In the fourth grade, he wrote a motivational letter to his future self, saying, “I hope to go to a good college…then go to the pros and play on the Niners and the Packers even if they aren’t good in seven years.”

19. When he was at the University of Nevada, Reno, his coach wanted to move him to safety at first.

Before the 2011 NFL Draft, former 49ers head coach Jim Harbaugh made Kaepernick play him one-on-one in a throwing contest.

There was a statue of Kaepernick getting a wedgie from a Falcons player in Atlanta prior to the 2012 NFC Championship game.

Kaepernick said that he has family members who are in law enforcement, and he respects them and the effort they put into serving and protecting the public. He said that the pigs on his socks were only meant to represent “rogue cops.”

17. He was baptized Methodist, confirmed Lutheran, and attended a Baptist church during his college years.

Colin Kaepernick spoke about his faith saying, “When I step on the field, I always say a prayer, say I am thankful to be able to wake up that morning and go out there and try to glorify the Lord with what I do on the field. I think if you go out and try to do that, no matter what you do on the field, you can be happy about what you did.”

Near the end of the 2012 NFL season, his signature touchdown celebration involved flexing and kissing the bicep of his right arm. He says he kisses his “Faith”, “To God The Glory”, and Psalm 18:39 tattoos, and the reason he does the celebration is because “God has brought me this far. He has laid out a phenomenal path for me. And I can’t do anything but thank Him.”

His favorite tattoo is on his inner arm and reads, “My gift is my curse.”

15. He reportedly started dating radio personality and television host Nessa Diab in July 2015, and officially went public about their relationship in February 2016.

The couple donated $60,000 worth of backpacks to kids in Harlem and the South Bronx.

Jed York, the owner of the 49ers, was so inspired by Kaepernick’s donation that he donated one million dollars to the cause as well.

Kaepernick once handed out his old suits to men leaving a parole office. He hoped that the suits would make tasks like interviewing for a job much less intimidating. He also once ordered 15 boxes of pizza and had them delivered to the 49ers’ media trailer.

13. His charity, Kaepernick 7, has a goal that encourages people to donate because of his own generous matching pledge.

On his charity’s website, he said, “I will donate one million dollars plus all the proceeds of my jersey sales from the 2016 season to organizations working in oppressed communities, 100k a month for 10 months.” He also donated loads of books, shirts, and hats to men’s shelters and orphanages.

12. When Kaepernick learned about the historically devastating famine in Somalia that could have left six million people without food, he helped secure a 60-ton cargo plane and filled it with food and water.

He also created a GoFundMe page to provide relief to the people of Somalia, and he helped raise over one million dollars in 24 hours.

He has a 115-pound pet tortoise named “Sammy” that he got when he was 10 years old. He is into fashion, and he is obsessed with sneakers and hats. He loves Sour Patch Kids and the 49ers gave him a birthday cake shaped like a Sour Patch Kid when he turned 26.

He is a movie collector and owns about 250 DVDs. His favorite movie is “Step Brothers.” He also loves Disney flicks like “The Incredibles”, “Finding Nemo”, “Despicable Me”, and “How to Train Your Dragon.”

10. Kaepernick was born in 1987 in Milwaukee, Wisconsin, to Heidi Russo, a 19-year-old who was single at the time.

His birth father, an African-American man, left Russo before Colin was born. Russo placed Colin for adoption with Rick and Teresa Kaepernick, a white couple who had two children–son Kyle and daughter Devon–and were looking for a boy after losing two other sons to heart defects.

Kaepernick became the youngest of their three children. He lived in Fond du Lac, Wisconsin, until age four, and attended grade school in Turlock, California.

9. When he was eight years old, he began playing youth football as a defensive end and punter.

He then became his youth team’s starting quarterback at age nine, and he completed his first competitive pass for a long touchdown. A 4.0 GPA student at John H. Pitman High School in Turlock, California, he played football, basketball, and baseball.

Colin Kaepernick was nominated for All-State selection in all three sports his senior year.

8. Kaepernick was the MVP of the Central California Conference in football, leading his school to its first-ever playoff victory.

In basketball, he was a first-team all CCC selection at forward and led his 16th-ranked team to a near upset of #1 ranked Oak Ridge High School in the opening round of the playoffs.

7. Kaepernick achieved most of his accolades in high school as a baseball pitcher and received several scholarship offers in that sport, yet he desperately wanted to play college football.

He was almost 6ʹ5ʺ as a senior, but weighed only 170 pounds and his coaches generally kept him from running the ball to limit his risk of injury. He also had poor throwing mechanics, despite his strong arm.

6. During his junior year, Larry Nigro, Pitman’s head coach at the time, made a highlight tape that Kaepernick’s brother, Kyle, copied to DVD, then sent to about 100 Football Bowl Subdivision programs.

Kaepernick received some interest, but no scholarship offers.

5. Even as a senior, Kaepernick received little attention from FBS schools.

Although the University of Nevada, Reno coaching staff frequently watched video of his high school team, no one from the Nevada Wolf Pack football staff came to Turlock to see him play during his senior football season.

Nevada head coach Chris Ault decided to offer him a scholarship after one of his assistants, Barry Sacks, saw Kaepernick dominate a high school basketball game on an evening where he was suffering from a fever of 102 °F. Nevada was the only school to offer him a football scholarship, but was concerned that he would opt for baseball until he signed in February 2006.

4. He was a two-time California all-state baseball player and was listed as a draftable prospect on MLB’s website in the class of 2006.

He earned Northern California athlete of the week honors as a pitcher. As a senior in high school, he threw a 92-mph fastball as reported during his first college football start in 2007 against Boise State.

In the 2009 MLB Draft, he was selected in the 43rd round by the Chicago Cubs. He decided that he wanted to continue to play football at the University of Nevada, Reno and chose not to sign with the Cubs.

3. In Kaepernick’s senior season at the University of Nevada, Reno, he became the first player in NCAA history to have over 2,000 yards passing and 1,000 yards rushing for three consecutive seasons.

He is the only quarterback in the history of Division I FBS college football to have passed for over 10,000 yards and rushed for over 4,000 yards in a collegiate career.

He graduated from the University of Nevada, Reno in December 2010 with a bachelor's degree in business management and is a member of Kappa Alpha Psi fraternity.

2. In the 49ers’ final 2016 preseason game on September 1, 2016, Kaepernick opted to kneel during the U.S. national anthem rather than sit as he did in their previous games.

He explained his decision to switch was an attempt to show more respect to former and current U.S. military members while still protesting during the anthem, after having a conversation with former NFL player and U.S. military veteran Nate Boyer.

1. In the following weeks, Kaepernick’s jersey became the highest-selling jersey on NFLShop.com.

An NFL fan poll was taken during the beginning of the 2016 NFL season, and he was voted the most disliked player in the NFL; this poll was polarized, with 37% of Caucasians disliking him “a lot”, and 42% of African-Americans liking him “a lot.” Read Also Interesting Facts about George Kittle 49ers tight end.