Carson Wentz is the Quarterback for the Indianapolis Colts. Here's the 10 Facts You Didn't Know About Carson Wentz.

Carson Wentz is the Quarterback for the Washington Commanders. Indianapolis Colts traded him to Commanders for 2022 NFL Draft two third round picks. He was drafted 2nd overall in the 2016 NFL draft by the Philadelphia Eagles and has taken the NFL by storm with his amazing performances. Here's the 10 Facts You Didn't Know About Carson Wentz. 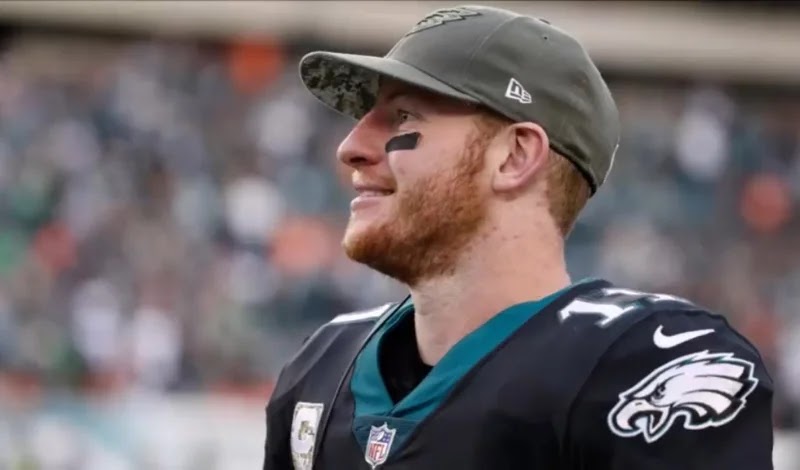 10. Carson Wentz is a devout Christian.

His faith in Christ is one of the most important elements of his life. In fact, he considers his faith the biggest influence on his football life.

According to teammates, he has never been seen before cursing his fate or regretting decisions. He is quoted as saying he plays not necessarily to please the fans, but for his faith and to please the Lord. His faith helps him see the bigger picture and focus on what he considers important.

This is also one of the biggest reasons why he launched the AO1 Foundation, a charity dedicated to uplifting the lives of communities through a focus on Christianity.

9. Carson Wentz was a three-sport star in high school.

QB Carson Wentz was a very versatile player in high school, a star across three sports. He played quarterback and defensive back for Bismarck Century High School, leading his school to an 8-3 record and to the state semifinals.

He was also a starter for the school baseball team for three years, and was part of the runner’s up team in the state championships in 2010.

He also played the forward-center position for their number 1 ranked state basketball team.

Friendships across sports is not unique, but the bromance between Wentz and Trout is deeper than ever.

Trout is one of the most successful Major League Baseball players, a three-time most valuable player and a winner of multiple awards.

Trout and Wentz are often seen hanging out together, engaging in such hobbies as hunting birds. They have also publicly exchanged presents, many of them in-game.

Trout is a devout football fan and long-term season ticket holder for the Eagles.

The Indianapolis Colts quarterback Carson Wentz is not the only sports star in his family. His brother Zach was a starting pitcher and infielder for the North Dakota State baseball team, and was part of a team that put together 40 wins in 2012, in the process setting career records for games played, doubles, and hits.

His cousin Connor played tight end from 2013 to 2015 for North Dakota State. The family sports history also goes back a generation. His father also played linebacker at Division II Northern State in South Dakota in the 1980s.

6. Carson Wentz has never gotten a B in any of his classes.

He was so smart and dedicated to his studies that he claims he never got a B in any of his classes, only As, both in high school and college.

He was also so dedicated to football, that his girlfriend at the time once caught him watching game film on his phone under the dinner table while they were on a date.

Because of this incident, his then girlfriend didn’t hesitate to take his phone away on date nights.

5. Wentz once wrote about being a pro football player as a kid.

He spoke about this in an article for the Players’ Tribune, describing how things have come full circle for him now as a pro football player. In the article, he described how growing up in North Dakota helped mold him into the football player he is today.

He was for a long time linked with his high school sweetheart Melissa Uhrich. Their relationship was once called “The Perfect North Dakota Relationship” by the New York Post.

He, however, broke up with her and moved on, proposing to Maddie Oberg in February of 2018. She said “yes” and they married later in the year, and are now expecting their first child.

He made the announcement on Twitter and Instagram around Thanksgiving, posting a cheesy photo of their family dog holding the ultrasound photo.

3. Wentz once helped save a young boy’s life.

He has had his fair share of charitable actions off the field, most notably his work with the charity organization AO1 foundation.

However, none trump the story of how he once helped save a young boy’s life after a training camp.

The boy, Max Shott, was a young fan whose symptoms became clear after his parents watched a video featuring Wentz in a previous training session.

Wentz had granted a cancer patient, Lukas, his last wish, meeting him after initially sending him a video.

This video caught the eye of Max’s parents, who found a lot of overlap in Lukas and Max’s symptoms. This video prompted them to seek medical care, where they later found that their son had cancer and eventually sought treatment.

When asked about his favorite player, he does not hesitate to mention his hero Brett Favre. Favre is considered an NFL legend, and is remembered for his records and loyalty to the Green Bay Packers.

It is easy to see why he loves him. They are both known for playing the quarterback position with incredible commitment.

Favre once retired to save his team and fans from the pain and anguish of having their season ruined.

1. Wentz was the valedictorian of his high school class.

He graduated from Bismarck Century High School in 2011, but what many people do not know is that he was the valedictorian of his class.

Many athletes with such promise are often happy to move on to their chosen colleges without much fuss, but Wentz was a standout student, and he delivered the closing speech at his graduation. He was also part of the national honors society in high school.

That’s all 10 Facts You Didn't Know About Carson Wentz, tell us who you think is better, Carson Wentz or Dak Prescott?