Richard Sherman is a famous American Football cornerback. He has been named to five Pro Bowls and was a key part of the Seattle Seahawks' Legion of Boom defense. Here's the 10 Facts You Didn't Know About Richard Sherman. 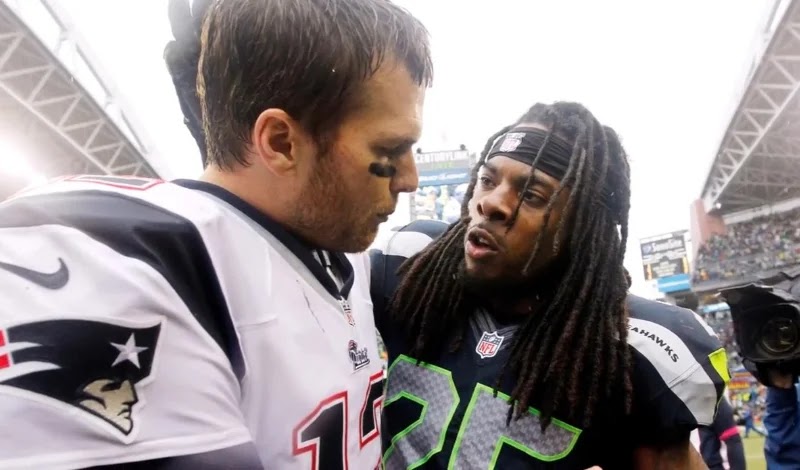 10. Richard Sherman does not shy away from trash talk.

Buccaneers Cornerback Richard Sherman has always had an abrasive personality and is considered a divisive figure in many circles.

Over the years, he has been in the spotlight for talking trash to opponents and other people in the football world.

Former Seahawks' Richard Sherman does not shy away from controversy and has clashed with superstar quarterback Tom Brady as well as sports debater Skip Bayless before.

CB Richard Sherman once went after Skip Bayless on ESPN in response to a seemingly endless barrage of criticism from the sports debater. Skip Bayless had called his ability into question more than once in 2012, despite the fact that Sherman had pretty impressive stats that year and was named to the NFL All-Pro team.

9. Richard Sherman has a running beef with Darrelle Revis.

In his true combative and controversial nature, one of the people Sherman has always been at odds with is Darrelle Revis. They are both cornerbacks, and their beef can be traced all the way back to 2012, when Revis was seen as one of the best cornerbacks in the league.

Their rivalry spilled onto social media, with Revis accusing Sherman of always talking about him in order to stay relevant.

Sherman, in his characteristic nature, did not shy away from the spat, essentially telling Revis that he was much better, and not his competition. Revis has since retired, but the jury is still out on who, in their prime, was the better football player.

One thing is for sure, though, Sherman was the better trash talker.

Harry Potter fans in the football world will be delighted to know that Sherman is a huge fan of the fictional character and the franchise.

Cornerback Richard Sherman was so obsessed with Harry Potter that he once wore a full Harry Potter costume to a press appearance, complete with a magic wand.

Granted, it was mostly because his son asked him to, but it only cemented his place on the list of Harry Potter fans in the NFL.

Richard Sherman has reportedly followed the franchise for years, reading all the books and attending the midnight releases of the movies when they came out during his college days at Stanford.

Bucs CB Richard Sherman loves his video games; his favorite video game franchise is Call of Duty. He not only enjoys playing, but is also an investor in gaming teams and companies.

In 2019, he was signed by Enthusiast Gaming as part of their Luminosity Team. He has since been a brand ambassador of the company, a shareholder, and a member of their Call of Duty team.

The plan is to challenge other NFL players to publicly stream matches across the company's networks.

For context, Enthusiast Gaming is one of the largest e-sports companies in the world, with up to 150 million visitors to its platform every month.

Sherman and Ashley got married in 2018, but have been together much longer than that. They got engaged in June of 2015, a few months after welcoming their first child together.

Their son Rayden was born just a few days after Super Bowl 49. Their second child, daughter Avery, was born in April of 2016.

The two celebrated their wedding in 2018 in the Dominican Republic during a period when Sherman was recovering from an Achilles injury.

5. Richard Sherman is an active member of the NFL Players’ Association otherwise known as the NFLPA.

Richard Sherman is one of the more vocal members of the NFLPA and is often one of the first to comment on matters, regarding player welfare.

CB Richard Sherman' controversial nature has also seen him make some unconventional decisions, like representing himself instead of choosing an agent.

NFL CB Richard Sherman is also one of the more active writers on the Players’ Tribune, a website that tells the players’ stories from their own perspectives.

According to Sherman, not many NFL players often think about life after football, something he is more than willing to rectify for himself.

Richard Sherman has invested in such companies as VICIS, a startup company that makes helmets aimed at reducing the impact of head injuries in football.

Sherman has also invested in Oxeia Biopharmaceuticals, a company that has been focusing on drugs that mitigate the effects of concussions as soon as they happen.

The Former Seahawks CB also joined VC firm Decibel as one of their investors and advisors.

3. Richard Sherman is a big Lakers fan and was friends with Kobe Bryant.

Former San Francisco 49ers CB Richard Sherman is a huge fan of the Lakers, and has been seen with a Lakers jersey on numerous times supporting the team both courtside and at home.

Richard Sherman was friends with Lakers legend Kobe Bryant, who in the past reportedly helped him overcome his Achilles injury.

Kobe also suffered a much publicized Achilles injury, and was in the best position to advise anyone on recovery tips.

2. Richard Sherman is very committed to helping the less fortunate.

Despite his perceived arrogance, he is still committed to giving back to the community. He has a charity called Blanket coverage, which operates under the Richard Sherman Family Foundation.

Sherman was brought up to care for everyone else, with his childhood home often serving as a local hub or refuge during the holidays. He has kept with this spirit and has over the course of his career helped hundreds of families spend the holidays more comfortably, buying them gifts and supplies.

1. Richard Sherman negotiated his own contract.

His belief in himself seemingly knows no bounds. In 2018, he, with a little help from his wife, negotiated his own contract with the 49ers, a decision that was heavily criticized by experts in the league.

Things went well for him despite this, and he signed a three-year contract worth up to $39 million.

Many thought it was a poor contract, thinking he should have gone for more money. His contract did not have as much money guaranteed, but was loaded with incentives that would eventually raise his base salary.