Here's the 20 Facts You Didn’t Know About Former Seattle Seahawks Running back and Super Bowl champion Marshawn Lynch, his family, stats and more.

Marshawn Lynch is a former running back for the Seattle Seahawks. He was selected 12th overall in the 2007 NFL Draft. Before that, he was a running back at the University of California, Berkeley. Here's how he began playing football, how he rose to fame, his college stats, and his NFL stats. Here's the 20 Facts You Didn't Know About Marshawn Lynch. 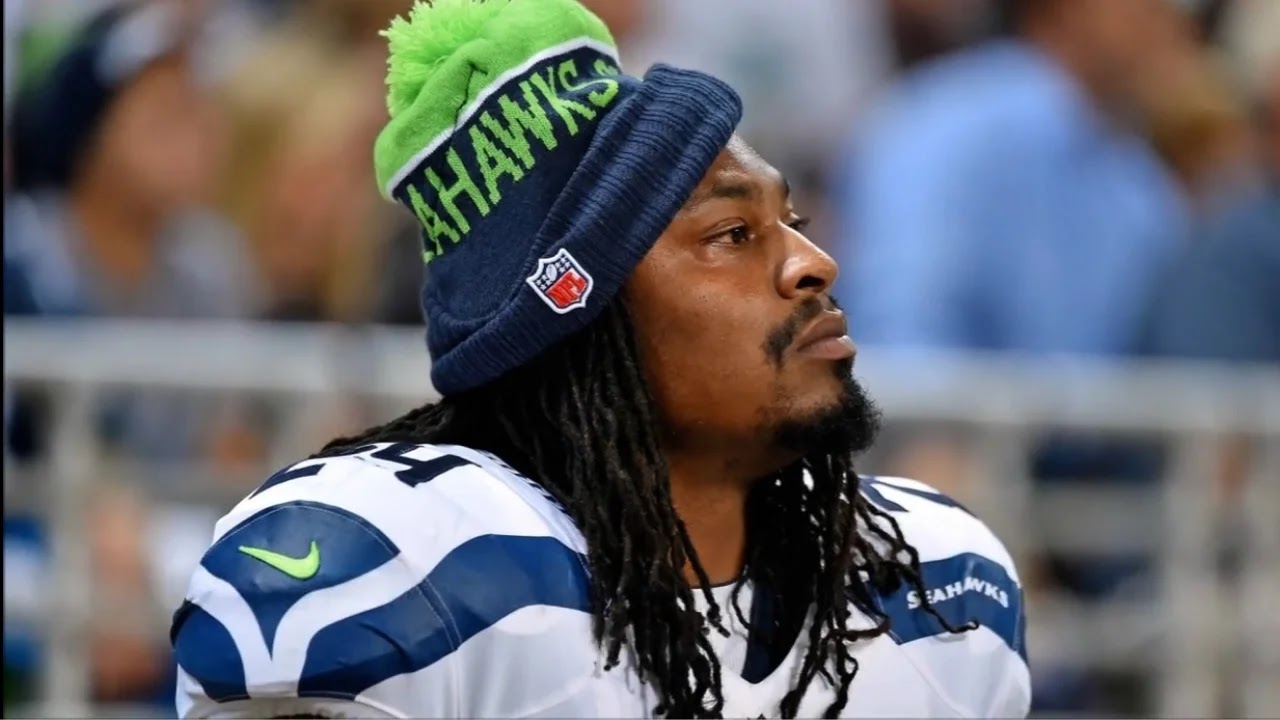 10. Up until Lynch’s senior year in high school, his name was “Marshawn Sapp-Lynch”, the surnames of his mother Delisa Lynch and father Maurice Sapp.

Following a tumultuous relationship with his father, Marshawn decided, as a minor, that he wanted the “Sapp” part of his name removed.

When Lynch was growing up, his nickname was “Shitty.”

9. RB Marshawn Lynch admitted that back when he was drafted, he thought Buffalo was in New York City.

During his time in Buffalo, he was pulled over by cops throughout the city on a regular basis, and he even tried to contact a local police chief to complain about the way he was being treated. Related : Things You Didn’t Know About Aaron Rodgers.

8. In June 2008, Lynch pled guilty to a hit-and-run charge, and he had his driver’s license revoked.

Former Seahawks Running back Marshawn Lynch was driving his 2008 Porsche Cayenne at 3:30 a.m. through Buffalo’s bar district, when he struck a woman in the street and failed to stop.

When questioned, Lynch stated, “I didn’t know my car had hit anyone or anything.”

7. Marshawn Lynch was arrested on July 14, 2012, by the California Highway Patrol for DUI after he was observed driving erratically.

Marshawn Lynch was reported to have registered a 0.10 on the breathalyzer at Alameda County Sheriff’s Office North County Jail in Oakland.

Running back Marshawn Lynch was incarcerated hours before hosting a youth football camp.

Lynch’s attorney, Ivan Golde, accused the police of bending the truth and changing stories to try to convict Lynch. The case was settled in February 2014 when Lynch pleaded guilty to a lesser charge of reckless driving.

Lynch received two years of probation and a $1,033 fine, and he had to attend drivers’ safety classes, but he did not have his license suspended.

6. On December 1, 2011, against the Eagles, Lynch was observed receiving Skittles from a trainer to celebrate his touchdown.

Fans would later throw Skittles onto the field after Lynch would score.

When he played Pop Warner, his mother was trying to find a way to soothe his stomach (which was prone to getting upset) before games. She tried other methods, but Skittles were what they ended up sticking with, and back in those days, she referred to them as his “power pellets.”

Lynch’s uncle, Lorenzo Lynch, had an eleven-year career in the NFL. Mistah F.A.B., who is a rapper, is also Marshawn’s cousin. Related : Facts about Russell Wilson.

4. Lynch’s reluctance to speak to the media came from his upbringing and the fact that he felt he was “forced to do something.”

His reasoning for not talking to the media is because he doesn’t understand what the talking is for. He likes to let his actions on the field do the talking for him. His mother has suggested that he was always somewhat of a quiet person, and he often did not like to talk to people whom he did not trust. Related : Facts about Tyreek Hill.

In college football, a “rover” is a hybrid between a safety and a linebacker. This position player usually has the build of a linebacker, but the speed to be a defensive back.

Marshawn Lynch said that his favorite run of all time was back in high school, when he made a couple of defenders look foolish and then sprinted in for a 46-yard score.

After the game, he said he would love to treat his offensive line to Sizzler if he wasn’t so broke.

Today, he lives exclusively off his endorsements and business dealings; saving his earnings that he makes from playing football. He also has his own clothing line called Beast Mode Apparel. The line carries athletic gear for men and women. Related : Facts about Saquon Barkley.

2. Marshawn Lynch posed nude for the 2014 edition of “ESPN The Magazine’s Body Issue.”

RB Marshawn Lynch has a Toyota Prius and has bragged about still having a 1986 (his birth year) Honda Civic. He also discussed using his Prius as an Uber car. He once let a student from his former high school drive his $80,000 Mercedes-Benz to prom. He loves Applebee’s and chain restaurants.

One of Marshawn Lynchʼs favorite desserts is lemon cake. Lynch made a cameo in the video game, “Call of Duty: Black Ops 3.” He doesn’t like to fly because he hates taking off his shoes at the TSA checkpoint. Related : Facts about Todd Gurley.

1. Marshawn Lynch is also known for his frequent community involvement.

In 2013, he was featured in Red Bull’s campaign, “Athletes Give Back”, when he put together a very successful food drive for his hometown.

10. Lynch grew up in Oakland, California with his three siblings.

Marshawn Lynch was raised by his mother, Delisa, who once held a 200-meter track record at Oakland Technical High School, the school that Marshawn would later attend.

According to his mother, when he was born, there were two placentas, indicating he may have had a twin who never developed. When the midwife and the doctor saw this, they told Delisa that Marshawn would likely grow up to be abnormally strong, since he was living off two placentas. Related :  Marshawn Lynch stats.

9. Since he was a child, his father, Maurice Sapp, has been in and out of prison.

Marshawn Lynchʼs father wasn’t around much, and as a result, his maternal grandfather became a father figure in his life. Related : Facts About Alvin Kamara.

8. At Oakland Technical High School, Lynch was a four-sport star in football, basketball, track, and wrestling.

In basketball, he played alongside future Cal star Leon Powe. Lynch helped lead his team to the state semi-finals.

7. In track and field, he competed mainly as a sprinter, but he also competed in jumping events as well.

In football, aside from playing running back, he also played defensive back, quarterback, wide receiver, and linebacker. He was ranked as the second-best running back in the nation behind Adrian Peterson.

6. Lynch attended the University of California, Berkeley, and he played for the California Golden Bears football team.

Former Seattle Seahawks' Marshawn Lynch majored in social welfare, and he was nicknamed “Money” while he was at Cal.

5. Marshawn Lynch wore the jersey No. 24 in his freshman year, but in his sophomore and junior year, he wore No. 10, which was his high school number.

The jersey number switch placed him in sequence with his cousins Virdell Larkins (No. 9) and Robert Jordan (No. 11), who were also his teammates at Cal.

4. In 2006, Lynch scored the game-winning overtime touchdown against Washington.

RB Marshawn Lynch later called the run his favorite career highlight, after which he spontaneously drove around the football field in an injury cart, pretending to ghost ride.

Marshawn Lynch holds the Cal school record for the most 100-yard rushing games with 17.

On January 2, 2007, he announced that he would forgo his senior season at Cal and enter the 2007 NFL Draft. Related : Facts about Joe Mixon.

During the 2009 offseason, Former Running back Marshawn Lynch was arrested in Culver City, California, for having a gun in his backpack in the trunk of a car he was occupying, which is a crime in California.

The NFL suspended him for the Bills’ first three games of the 2009 season for violations of the league’s personal conduct policy.

Marshawn Lynch was traded to the Seattle Seahawks on October 5, 2010. Related : Facts about Aaron Donald.

2. In Lynch’s first career playoff game on January 8, 2011, against the New Orleans Saints, he had a 67-yard touchdown run in which he broke nine tackles and with one arm, threw Saints cornerback Tracy Porter to the ground.

This run has become known locally in Seattle as the “Beast Quake.” The play gets its name from Lynch’s nickname, “Beast Mode”, and the fact that, during and after the play, the movement from fans jumping in celebration was so intense, that it registered on a seismograph 100 yards from the stadium. Related : Facts about Dalvin Cook.

1. When he was 12 years old, he promised his mother that he was going to make it to the NFL and buy her a house.

After he got drafted, he told his mother, “Momma, go get your house.”