Tom Brady is arguably the best quarterback in the NFL right now. He's won 7 Super Bowls, more than anyone in NFL history.

Tom Brady is arguably the best quarterback in the NFL right now. He's won 7 Super Bowls, more than anyone in NFL history. Here's the 10 Facts You Didn’t Know About Tom Brady. 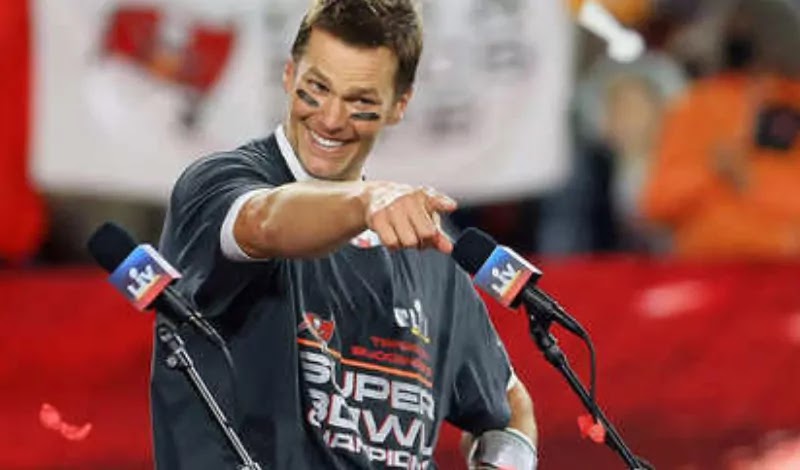 10. Tom Brady has a crazy health and diet regimen

He and his family follow a strict and rather controversial diet regimen. First, he swears by the 80/20 diet, one that consists of 80% alkaline components and 20% acidic components.

His diet also varies from season to season across the year. For instance, to maintain harmony and balance throughout his metabolic system, he eats meals like red meat in the winter and mostly raw foods in the summer months.

Most of his diet is vegan though, with some lean meat added during the cold months of the year. He also adheres to the famous TB12 method which advocates for, among other things, drinking up to 1/32 of one’s body weight in water every day. This diet has also been adopted by Rob Gronkowski and Kirk Cousins as well as hockey player Mark Scheifele.

9. Brady has been friends with two presidents

In 2004, he attended the state of the union address, reportedly as a special guest of the then-president George W. Bush.

Tom Brady is also a friend of President Donald Trump, having reportedly known him for more than 16 years. Trump apparently received a phone call from Brady before the 2016 election where Brady revealed that he had voted for Trump.

Former NFL Quarterback Tom Brady has been a Republican for a long time and endorsed Republican candidate Helen Brady for Massachusetts state auditor in 2018.

8. He has been linked to political office

In 2004, he told ESPN that being a U.S. senator would be one of his wildest ambitions. This, coupled with his friendships and association with politicians, has seen him become the subject of a lot of speculation.

Former Bucs QB Tom Brady has been on lists of the most likely NFL stars to vie for president, and even though he keeps denying those allegations, they simply will not go away. Who knows, maybe he might change his mind and eventually pursue his crazy ambitions in politics.

7. Tom Brady is one of a long list of Junipero Serra High School stars

6. Tom Brady comes from a family of huggers and kissers

The Brady family is not afraid to show affection. In fact, after many Patriots games, Brady has been spotted greeting family members and old friends with hugs and kisses.

Thomas Brady Senior vowed never to close himself in this way and raised his children in an open, loving family.

Most people know how good Brady was at baseball and football while in high school. Not many realize how good a golfer he was as a boy.

The Seven times Super Bowl Winner' Tom Brady comes from a family of three daughters, and with a ratio of four ladies to two men, his father often felt the boys were outnumbered. He soon began taking him to a private men’s club in nearby San Francisco where they could have a little boy time and play golf. They would reportedly arrive at the course as early as 6:30 A.M. on Sundays, play a few rounds and be back home in time to go to church by 11. He became quite the capable golfer by age 10.

Even though Brady is the most recognizable face in the family, his sisters also held their own athletically. In fact, all his siblings earned scholarships to college.

Tom Brady's sister Maureen went to Fresno State on a softball scholarship, while his sister Julie was recruited to the St. Mary’s soccer team before later earning a scholarship.

His sister Nancy was also eligible for a softball scholarship to UC-Berkeley, but decided to pursue a different path. Before Brady became famous, he was known only for his siblings, with people calling him ‘the little Brady’ or ‘Maureen’s little brother’.

As a young man, he wrote a paper promising that he would be a household name and that his sisters would instead be known as ‘Tom Brady’s sisters.’

Brady used part of his rookie contract signing bonus to buy a house from former Patriots cornerback Ty Law. He could not afford the house at the time, and therefore had a few of his teammates live with him to help him pay it off.

This purchase is a testament to how confident he was, even in his early years in the NFL. He committed to buying a house as a fourth-string quarterback even though he was not sure about his future on the team.

2. Tom Brady can chug beer at an astonishing rate

One of his talents is chugging beer, which teammates and friends have confirmed he does at an astonishing rate. Even though he only drinks occasionally, his speed is one that would surprise even the most ardent drinkers.

He got the chance to prove the stories right in an appearance on The Late Show in 2018, downing a glass in record time on camera with host Stephen Colbert.

1. Tom Brady has worn the same shoulder pads since 1995

Stars like Brady have their own rituals and beliefs, some bordering on the bizarre. One of Brady’s has to do with his shoulder pads, which he has worn since 1995. They have been reconditioned over the years, but Brady has pretty much worn the same shoulder pads he had on in his Michigan debut in 1995.