The Super Bowl 2023 will take place on the night of February 12-13 at State Farm Stadium in Glendale, Arizona. The game begins at 6:30 P.M. ET.
Home
Arizona Cardinals
NFL

NFL Game of the Week Preview: Cardinals vs Washington

The choice of the "Game of the week" will seem unexpected for many of you, The Cardinals and Washington entering the season to take the next step

The choice of the "Game of the week" will seem unexpected for many of you, because during the game week we will see the opposition of Texans, which needs to be rehabilitated for the defeat in the first round, against Baltimore, as well as Seahawks against the New England Patriots. with a completely new philosophy of offense. But let's admit that during the season we will definitely have many reasons to talk about these teams, and whether there will be an opportunity to write about the Washington Football Team, which many predict the fight for the first pick in the 2021 Draft, is unlikely! Moreover, we will see a confrontation between two diametrically opposed styles: the flamboyant and Arizona Cardinals Offensive Cliff Kingsbury against the defense of Washington Ron Rivera and Jack Del Rio, who made a serious claim in the first match of the season. 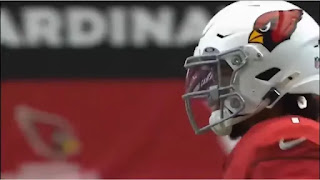 The Cardinals are entering the season hoping to take the next step in their development. The biggest question will be whether quarterback Kyler Murray can follow in the footsteps of Patrick Mahomes and Lamar Jackson and significantly improve his level in his second year in the League. But there is room for improvement. First of all, in terms of the speed of decision-making, since last year out of 48 sacks that were committed on Kyler, 23 are completely his fault in view of overexposure of the ball. Another area for progress could be working to improve the accuracy of the middle passes (10-19 yards) in the center, whereby the best quarterbacks dominate the League (this, of course, can be attributed to short stature and poor visibility of the field behind the line of offense). Nevertheless, the main qualities of Kyler, for which he is compared to Russell Wilson, remain with him. We saw this in the first leg against San Francisco 49ers, in which the second-year quarterback became the lead on his team with 91 yards in 13 tries. Remarkably, a significant portion of those yards were scored during 2nd / 3rd situations and a lot when the 49's defenses rolled back and left plenty of room for Murray to run.

To help develop Kyler, star-studded host DeAndre Hopkins is called upon to join the team this offseason and has already shown himself to be effective against 49ers with 14 receptions for a record 151 yards. Even more about its effectiveness is the fact that 8 of these moves provided the team with the 1st down! One of the factors behind this instant success in the new team is the Arizona offensive system that Cliff Kingsbury is building. This system allows the protection to be stretched across the field and provides more space for the receivers. Christian Kirk, who was unable to show his speed qualities and made only one reception for 5 yards in the first round match, should also declare himself. He will have the opportunity for this, as he will play against cornerback Ronald Darby, who played not the best game against Philadelphia Eagles (allowed 3 catches at 72 yards). In the backfield of the Cardinals, the main burden will fall on the shoulders of Kenyan Drake, who showed the greatest efficiency on the outside clearances.

From a defensive point of view, the team closed the stem well in the first leg (allowing only 123 yards), which completely placed the burden of responsibility for advancing the attack across the field on the shoulders of Jimmy Garoppolo, which he did not successfully cope with. However, Arizona's main problem was in the center of the field, and in the first match it does not seem to have been solved. 8 Draft Pick Isaiah Simmons made mistakes and two of them led to touchdowns for 49ers (overall, he allowed 86 yards on the reception!). Yes, it was only the first match, and the head coach in a post-match interview expressed his full support for the newcomer, but this zone still remains a problem for the team.

And what about Washington? The team, which was forced to change its name due to protests on social grounds (by the way, I’m still waiting for such talks about the Kansas City Chiefs and Chicago Blackhawks to begin), a team with a new head coach (which, in theory, amid a pandemic and the impossibility of a normal preseason meant a much more difficult rolling into the season). In the first leg, they secured a victory over Eagles. Yes, not just a victory, but made a comeback losing 0-17 during the 2nd quarter !!!

In many ways, this became possible thanks to the simply crazy game of the di-line of “Washington”, in which the team invested for a long time, and which is simply overflowing with talent. Judge for yourself: 5 people are the picks for the first round of the draft: Defensive end Ryan Kerrigan (16th peak 2011), Defensive end Jonathan Allen (17th pick in 2017), Nose Tackle Daron Payne (13th pick 2018), DE Montez Sweat (26th peak of 2019) and, of course, Chase Young (2nd pick of 2020). Chase's arrival may have been the catalyst that finally shaped this line, and it will now terrify the NFL just as it did with San Francisco a year ago. In the first match, this line of defense made 31 pressure on the quarterback and 8 sacks. The greatest credit goes to NFC's best defensive player Ryan Kerrigan (who with 2 sacks became the best player in the franchise on this indicator) and Chase Young (who simply terrorized 38-year-old Jason Peters on the left, earned 1.5 sacks, 4 pressure on the quarterback and forced 1 fumble). If this young man continues in the same spirit, he will not only easily take the title of the best rookie in defense at the end of the year, but will also enter the TOP-5 defensive players in NFL History. Yes, we can say that Philadelphia Eagles on-line was not in the best shape, due to the recent losses, but still, the level of play that we saw from Washington Football team and problems in the Arizona Cardinals line (injury to the starting center Mason Cole) promise us that "show must go on", and in this match we will see Kyler under pressure more than once. The main charm of the guests' d-line is that you don't know

The secondaries also contributed to the team's victory with two interceptions by Fabian Moreau and Jimmy Moreland. It is Fabian who will have to hold back DeAndre Hopkins, and if he succeeds, it could tie Arizona's hands (after all, during the first match of the season, all other Cardinals players made only 12 receptions for 79 yards).

The guests' offense will be led by Dwayne Haskins, who seems to be getting used to his leadership role. During training camp, Ron Rivera emphasized the speed of decision-making, and Dwayne showed progress in the match with the Eagles. He handled the pressure effectively (was under pressure 14 times or 45% of rallies, which is one of the highest rates of the week, but did not give up a single interception). And the main target for Haskins will be speedy Terry McLaurin, who will most likely be opposed by cornerback Dre Kirkpatrick. It is also possible that tight end Logan Thomas will score many yards, as the opposition to this position was and remains the Achilles heel for the Cardinals' defense.

Backfield, though, will be represented by a "committee" running in the face of Peyton Barber, Antonio Gibson and J.D. McKissic does not bring expectations in being able to put up a decent resistance to Arizona's Defensive line, which easily neutralized the 49's much more effective offensive offense.

To summarize, if Washington's defense shows itself in the same glory as in the match of the first week and Dwayne Haskins plays as effectively and conservatively, then Arizona will face a very difficult match at home. I would even venture to bet that after this match the guests will still show off 0 in the defeat column.