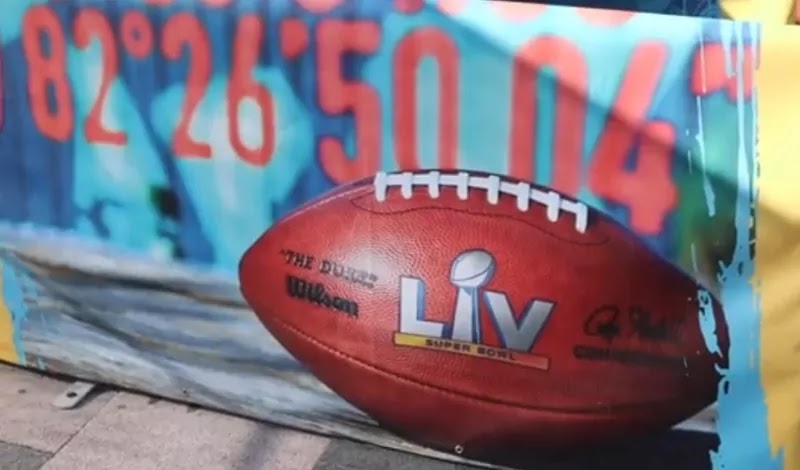 What is Super Bowl LV :-

Let's dive in to Super Bowl 55. So Kansas City is coming off a dominant win over the Buffalo Bills they won 38-24 they were down 9-0 early in the game that means nothing to Kansas City as we've learned in years past mahomes is going to play in his second Super Bowl in his first three years maybe kind of like Tom Brady is looking. maybe the goat of all time maybe the new goat of all time we'll see how that plays out. Last week mahomes 29 out of 38 passes for 325 and three touchdowns no intercept interceptions rushing wise 25 carries for 114 yards and two touchdowns that number's a little skewed from their running backs.

Hardman had a 50-yard rush so if you take that 50-yard rush away they actually only average 2.6 yards per carry that worries me a little especially since they're going up the number one rushing defense in the league Tyreek Hill and Travis Kelce, they had 22 receptions for 290 yards and two touchdowns. If Tampa Bay wants to have any chance of winning Super Bowl 55, they need to shut both of these guys down or at least contain them to something nothing like those numbers on the other hand Tampa Bay Buccaneers squeaked by the Green Bay Packers 31-26.

Let's be honest Brady we know him he's in his 10th Super Bowl going for his seventh Super Bowl win which would actually be more than any franchise in NFL history last week though he wasn't his best 20 out of 36 for 280 three touchdowns but three interceptions that really kept Green Bay in that game. Their rushing attack was not great 24 out of 70. 24 rushes for 74 yards 3.16 that's not good you're going to have to do better than that if you're going to want to beat kc. Godwin and Evans targeted 17 times in that game, but they only had eight receptions 171 yards but only eight receptions.

Brady kept missing Evans deep that concerns me a bit going into this matchup stick around I have at the end of this article I'm going to give you actually a prop bet on Evans that we like a lot. they did have one TD last week between the two a lot of drop-offs last week to fournette.

They targeted him seven times out of the backfield he caught five passes for somewhere around 15 to 20 yards not much but if you're looking for a Super Bowl prop bet.

Take a look at his number as well to go over because Kansas City will blitz a lot and I think that Tom Brady will have to dump off he does that because he's not a running quarterback like mahomes doesn't dump the ball down to his running back a lot because he can run but Brady on the other hand he will dump it off, let's look at the defenses. Kansas City Chiefs forced an int the last two games they've played their defense looks pretty good they gave up 129 rushing yards last week but 88 was to Josh Allen. Tom Brady is not rushing for 88 yards so if you look at the rushing attack they only gave up 41 yards rushing last week that's pretty good.

Allen 287 throwing two touchdowns. he was 28-48, but he also did take four sacks. Kansas City like I mentioned does like to blitz a lot and I think with an old core old quarterback Tom Brady. Yes he is old, but he can't move the same way he did 20 years ago, but he still looks young they will blitz him a lot they will look to try to get to Brady at least knock him down and. get some pressure on him, on the other side, Tampa Bay their defense allowed 346 yards to Aaron Rodgers three touchdowns interception they did sack Aaron Rodgers five times again they're going to blitz they're going to put pressure on the homes the difference between the two though is mahomes can run a little bit better than Brady.

The defense of the bucks gave up only yards per carry that's actually a little higher than their average over the season one thing that's concerning is they let nine different receivers catch a pass against them last week as you know, Patrick Mahomes will throw to anybody and just find that open spot that's what makes their offense so versatile and so dynamic, so that's going to be another concern I have for Tampa are they going to be able to play man are they going to play zone. which is going to free my homes to just go to that open receiver just like Aaron Rodgers did.

Kansas City Chiefs has the better rushing attack in this matchup they have the better passing defense in this matchup but on the other side Tampa Bay has the better overall defense and the number one rushing defense and let's be honest both of them are good at a lot of things, they're both top five offenses. when it comes to points Tampa Bay is actually number two in the NFL their top 10 both in yards kc's number one in the NFL, their top two in passing, kc one, Tampa Bay Buccaneers number two and in defensive scoring Tampa Bay gives up 22.3 points per game and kc gives up 22.4 points per game.

That's how close these matchups going to be so who wins. Well, I have to be honest with you, personally as an NFL fan. I'm rooting for Tampa Bay and Tom Brady to get the seventh his seventh overall championship. I think it would make him the greatest of all time in the NFL hands down it would be hard to. argue with that on the other hand I'm a realist and Kansas City's passing attack and the way mahomes carries himself. is just unbelievable and this game is going to come down to I think one play and I think it's going to be mahomes and Andy Reid you have to take coaching into this. Andy Reid has the guts to go for it in certain situations as we learned about having Chad Henne running and passing on short downs on fourth and one to win the game.

We know that Andy Reid will go for the win and I think it comes down to that will Patrick mahomes be nervous now he's been here he was just there this is his second one in that many years, and you know if he wins this I think tony romo had a point, they might say that he has a chance to be greater than Tom Brady. Over the path of his career we can't talk about it right now because he's in his third year come on guys third or fourth year yeah third year so like stop that talk Tom Brady is the greatest of all time right now, but I think the tides are changing we like Kansas City minus three here all right Kansas City minus three we're making it a five unit play it's our Super Bowl pick of the year because there's only one Super Bowl now.

The National Anthem will be performed by the R&B and Hip-Hop Singer Jazmine Sullivan and music singer Eric Church.

Super Bowl LV is very important to all the Americans, it's the most watched tv program every year, with a commercial airtime going for million of dollars for each 30 seconds block and it's like a holiday for them.

How to Watch Super Bowl LV

To Watch The Super Bowl LV Game, there's more than method, you can watch it live in tv channel or at stadium and the most popular and important methods is :-

- United Kingdom and Ireland : BBC One, Sky One Channel and BBC Radio 5 live

DAZN will also stream the Super Bowl in Germany, Japan and Canada.

There's alot of markets selling Super Bowl tickets and here's the best of them in price and trustworthy.