Micah Parsons is a linebacker who plays for the Dallas Cowboys in the NFL. Here's the 10 Facts You Didn't Know About Micah Parsons, his family.

Micah Parsons is a linebacker who plays for the Dallas Cowboys in The National Football League (NFL). He played college football for Penn State. He is ranked in the top ten recruits in the nation, and is supposed to be one of the best at his position. Here's the 10 Facts You Didn't Know About Micah Parsons. 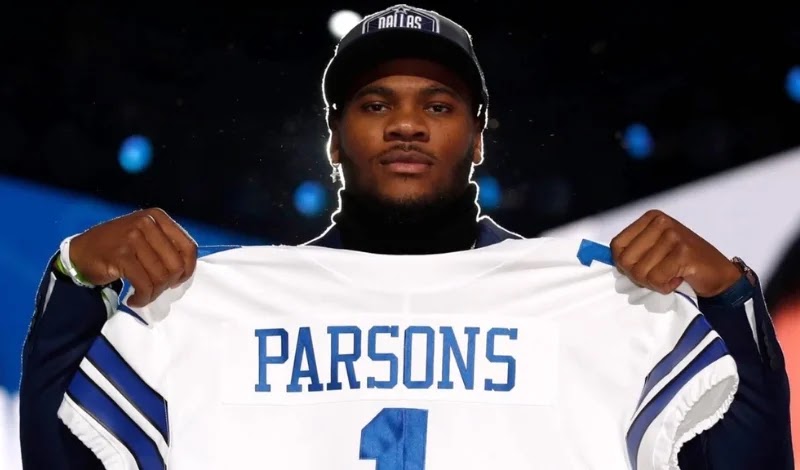 10. While Parsons is a stellar linebacker and seems to be an all-around nice guy, he was suspended in high school for allegedly inciting a riot.

It is alleged that Parsons stood up in a busy cafeteria and shouted, “GUN!” This caused students to flee the cafeteria in a hurry, causing what could have been numerous injuries to classmates.

The football stud was given three days’ suspension, which his father, Terrence, believed was too harsh after seeing a video of the incident.

According to Terrence, no students attempted to run or flee the cafeteria on the video he viewed.

Former Manheim Central football coach, Mike Williams, said the decision to allow Parsons to transfer from the school was “the worst decision ever made by the Pennsylvania Interscholastic Athletic Association.”

There is still a lot of controversy surrounding Parsons’ transfer to Harrisburg High School.

9. After transferring to Harrisburg High School for his junior football season, Parsons led the Cougars to the PIAA Class 5A state championship game in his junior season.

Harrisburg went undefeated on the way to the Class 5A state championship game with Parsons playing two positions on the football field.

Along with playing defensive end, Parsons played running back. He ran for more than 1,000 yards and rushed for 27 touchdowns in his junior season.

8. In May of 2020, further controversy followed Micah Parsons.

Humphries transferred to Cal and sued Penn State in January of 2020. Humphries claimed that allegations of hazing Penn State players were reported to Franklin and other coaches, but nothing happened to stop the bullying.

Humphries claimed head coach Franklin told him not to speak to police about Parsons because the linebacker was the team’s star player. At the time, Penn State said the allegations made by Humphries were baseless.

7. The 6-foot, 3-inch, 248-pound linebacker was one of the top college football recruits in America coming out of Harrisburg High School.

In high school, Parsons played defensive end and was the No. 5 recruit in the United States for 2018.

Who ranked higher than Parsons?

Parsons also ranked as the No. 2 defensive recruit and the No. 1 recruit from the state of Pennsylvania.

The likes of Ohio State, Nebraska, Georgia, and Oklahoma all attempted to lure Parsons out of Pennsylvania.

Franklin moved Parsons to middle linebacker, where he excelled in a two-year career at Penn State.

It is believed the two were together briefly while Parsons was in high school. Malcolm was born May 1, 2018, just before Parsons joined the Penn State Nittany Lions. Parsons often posts pictures on social media of himself and Malcolm.

4. Micah Parsons’ dad Terrence was routinely in and out of the family over the years.

He had three children with Micah’s mom, Sherese, but rarely hung around for long. While in junior high, and Terrence on the periphery of the family, Micah wrote his father a letter, asking him to be a bigger part of his life. Soon enough, Terrence returned to the family fold and remained with Sherese, Micah, and the linebacker’s siblings.

3. In July of 2021, fresh off of being drafted No. 12 overall by the Dallas Cowboys, Parsons surprised his mother with a brand-new house.

The Dallas Cowboys Linebacker Micah Parsons has a close relationship with his mother, Sherese Parsons. Although the football star was born and raised in Harrisburg, Pennsylvania, his mother's new home is in Dallas.

Parsons bought his mother a home in Dallas, so the two could live together. According to Parsons, it was a life-long dream to buy his mother a new home.

After buying the property, Parsons said, “I want to finally get my own house, clear my mom’s debt…I moved a lot when I was younger and if I could put me and my mother into our own home and have something to call ours, it would be amazing.”

Parsons’ family didn’t have a lot of money growing up, but his mother kept him engaged year-round in sports to prevent him from seeking out other ways to let off energy. For that, the linebacker is forever grateful.

2. Parsons’ father, Terrence, raised his son to be a Dallas Cowboys fan.

Now, the LB Micah Parsons is living the dream of both himself and his father. Parsons wanted to be drafted by the Cowboys so badly that he wore a blue suit to the draft.

While getting dressed for the draft, Parsons was caught on camera saying, “I look good in blue. You know, hopefully I'm drafted by someone in blue.” As the first 11 players began to be taken off of the draft board, Dallas appeared as a likely place for Parsons to land. He told his rep, Andre Odom, “If it's Dallas, I'm crying.”

Shortly after making that statement, Cowboys owner Jerry Jones phoned Parsons to welcome him to the team. Once he found out the Cowboys were drafting him, the tears began to flow down Parsons’ face.

When Sherese became pregnant with Micah, she was only 24 years old and already had two kids.

Sherese worked two jobs at the time, which was never enough to make ends meet. Terrence, Micah’s dad, was in and out of the family at the time. Sherese couldn’t support a third child and was contemplating an abortion. Only Terrence knew that Sherese was pregnant and about to have an abortion.

As fate would have it, a lady from the Sister Hall Church phoned Sherese to speak with her. After finding out about the predicament Sherese was in, the lady talked her out of having an abortion.

That’s all 10 Facts You Didn't Know About Micah Parsons, tell us if you think Micah Parsons will win the Defensive Player of the Year Award for this season!