Here's the Top 10 Facts You Didn't Know About the Pittsburgh Steelers Running back Najee Harris, his family, years at Alabama & high school and more.

Najee Harris is the Pittsburgh Steelers Running back, he was selected in the 1st round of the 2021 NFL Draft, Harris played college football at the University of Alabama. Here's the Top 10 Facts You Didn't Know About the future NFL Running back Najee Harris. 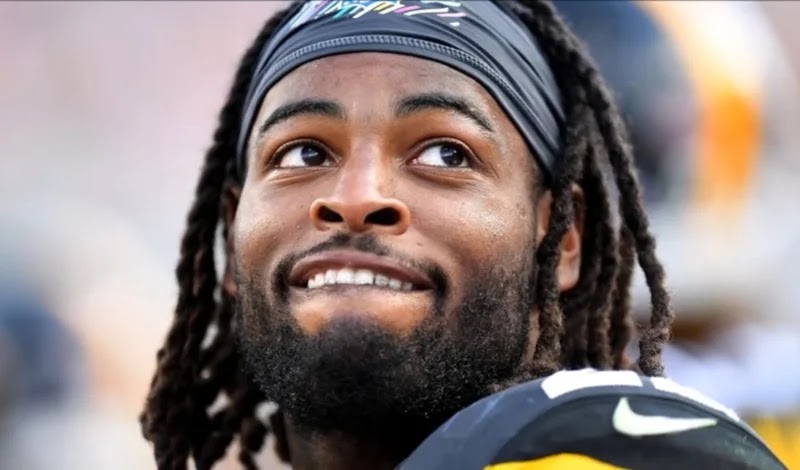 10. Running back Najee Harris was selected with the 24th pick in the first round of the 2021 NFL Draft.

Najee Harris had to overcome one of the biggest obstacles in life just to play football as a kid. The running back was homeless and spent time living in a homeless shelter from the age of 12. Harris grew up in the Bay Area and spent a large part of his childhood without a permanent home. It is a situation that often prevents kids from gaining the education they need.

It is a wonder that Harris excelled on the football field and ended up at the University of Alabama and the Pittsburgh Steelers.

9. Homelessness is near and dear to Harris’s heart, which is obvious after he spent time living in a shelter as a kid.

Najee Harris threw his NFL Draft party at the Greater Richmond Interfaith Program homeless shelter. The shelter was Harris’s home for many years as a child and teenager. Harris lived there with his parents and four older siblings and the running back had a small room at the shelter in 2010.

The draft party sponsored by Harris wasn’t actually for him, rather it was for the kids living there. Harris provided pizza, chicken wings, cupcakes, and goodie bags for  all in attendance to celebrate the draft.

It is always embarrassing when professional athletes do not know the rules of the sport they play.

Najee Harris falls into the realm of players that don’t know all the rules of football and is a part of the growing list of NFL players that didn’t realize games could end in ties.

On Sunday November 11, 2021, the Pittsburgh  Steelers and Detroit Lions tied 16 to 16. After the overtime period ended in a tie, Harris expected the game to continue and another overtime period to be played.  However, it didn’t. After the tie with the Lions, the Steelers running back said, “I didn’t even  know you could tie in the NFL. In my mind, I was sitting on the bench saying,  'I’ve got another quarter to go.' But someone came to me and said, ‘that’s it.’ I’ve never had a tie in my life before.”

7. Harris’s homeless background led ESPN play-by-play announcer Steve Levy to wrongly state that Harris slept on the floor in his dorm at the University of Alabama.

Levy claimed that Harris slept on his dorm room floor because he “was just more comfortable” that way. Harris called out Levy on Twitter after the game for making the untrue statement. It is likely that Levy got Harris’s story and that of another Alabama running back, Josh Jacobs, mixed up. Levy later apologized for making the mistake on air. Levy pledged to make a donation to Da' Bigger Picture Foundation after giving viewers the wrong information.

6. At the moment, it doesn’t appear Najee Harris is in a relationship.

The running back has been focused on his career to this point and that may be why he doesn’t have a love interest. Harris could be in a relationship with someone, but hasn’t revealed it to football fans as of yet.

5. It was reported that 25 colleges offered Najee Harris a scholarship to play running back.

Of course, the Alabama Crimson Tide were the team that landed his signature in the end. Coaches such as Notre Dame’s Brian Kelly, Cal’s  Sonny Dykes, and Michigan’s Jim Harbaugh visited Antioch High School to see Harris play. Harbaugh  was so impressed, he made two visits. Despite the interest from a who’s who list of universities, Harris committed to Alabama as a junior in 2015.

4. The Harris family spent a lot of time at homeless shelters, but they also had apartments of their own from time to time.

They weren’t the best areas to live in, however. Harris’s father, Curt, suffered from drug and alcohol addiction. Harris’s mother, Tianna, moved the family around a lot due to money shortages and they settled in Antioch due to cheap rents. However, it was not a safe area as Tianna regularly found shell casings and bullet holes in the family’s garage. Massive brawls also broke out nearby, which the family witnessed. After moving to a new apartment, the family found a dead body at their doorstep. A shooting  victim had fallen from the upper floor of the apartment building in front of the family’s door.

The highly recruited running back didn’t  get much playing time his first season at ‘Bama. Harris had 61 carries for 370 yards and three touchdowns. After the season, he stated that it was a mentally challenging time and he considered a change of schools to get more playing time.

2. Najee Harris ran for over 2,000 yards in his sophomore, junior, and senior seasons at Antioch High School.

That’s a grand total of more than 6,000 yards! He scored 36 touchdowns in his junior season alone. The next season, Harris scored 34 touchdowns to finish off his high school career. No wonder 25 college programs wanted him!

1. Najee Harris’s father, Curt, was in and out of the family for 20 years.

Drugs and alcohol kept Curt on the outside of the family, although there were times that attempts were made to bring Curt closer to his wife and kids.

Antioch High School faculty attempted to find  the family a home to get them out of the homeless shelter. It was a way to give Najee every chance  to succeed. The school’s principal Louie Rocha helped Curt land a construction job, but he didn’t show up to the job. Curt moved to Seattle instead and left Najee and the rest of the family to fend for themselves.

Curt had a brief spell playing football at Grambling State University before he left to pursue fast money. His relationship with wife, Tianna, has been labeled as abusive and tumultuous. Growing up in the environment Najee Harris did, has led to his success and an increased awareness of the struggles of others.

That’s all 10 Facts You Didn't Know About Najee Harris, tell us where you would rank Najee Harris among the best running backs in the NFL!