Here's the 10 Facts You Didn't Know About The Colts Running back Jonathan Taylor, his rushing records, Under Armour deal, girlfriend, father and more.

Jonathan Taylor is a NFL Running back for the Indianapolis Colts. He played at college for Wisconsin, he Drafted No. 41 overall pick of the 2020 NFL Draft by the Colts. Here's the 10 Facts You Didn't Know About Jonathan Taylor. 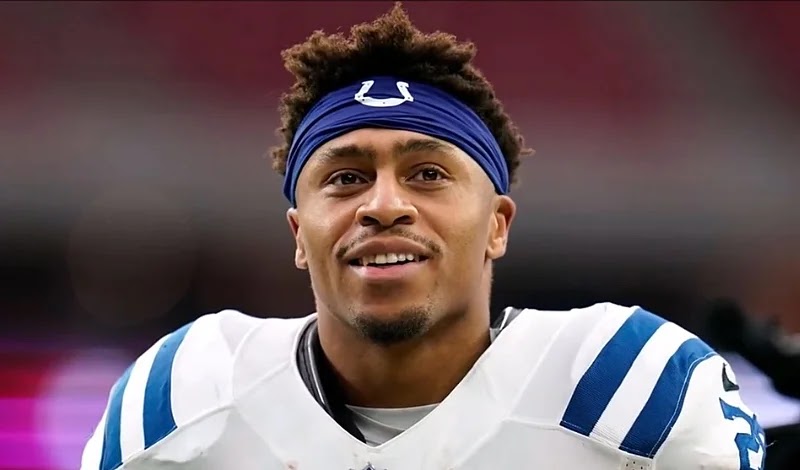 Taylor rushed for 4,642 yards and 51 touchdowns during his time at Salem High. In 2016, he was a New Jersey first-team All-State selection thanks to rushing for 2,815 yards as a senior, which set a South Jersey single-season record.

9. Jonathan Taylor was the No. 24 ranked running back in his country and New Jersey’s No. 8 overall high school football recruit.

8. At Wisconsin, Taylor became the first player in FBS history to rush for 6,000 yards in just three college football seasons.

Upon leaving the Badgers, Taylor was sixth all-time in career rushing yards in NCAA football with a total of 6,174 from 2017 to 2019.

In addition, Taylor is only the third football player in FBS history to record multiple 2,000-yard rushing seasons.

7. Taylor was an incredible talent at Wisconsin.

Taylor was named Big 10 Running Back of the Year twice and Big 10 Freshman of the Year. He twice won the Doak Walker award as college football’s top running back.

Yet, things could have been much different for Taylor and the Wisconsin Badgers.

Taylor originally committed to Rutgers in 2016,  but after the Scarlet Knights got off to a poor start that season, the running back withdrew his commitment.

The Salem High School star committed to Wisconsin instead and went on to becoming  a three-time All-American for the Badgers.

After decommitting to Rutgers, Taylor said, “I  never really thought that I had fully evaluated all my options." Taylor’s options ended up being Wisconsin, Virginia Tech, and Yale.

6. In November of 2021, it was revealed that Jonathan Taylor’s girlfriend is Ayanna Chapman.

The two have been together since they both attended Salem High School. Taylor met Chapman when he was just 15 years old.

Although Taylor had posted pictures of Chapman on social media previously, little is known about her. What is known about Chapman is that she played on Salem High School’s field hockey team.

While Taylor played football for the Wisconsin Badgers, Chapman attended Ball State University, where she was a political science major.

For the most part, the couple have kept their relationship on the down low over the years.

5. Jonathan Taylor’s father, Jonathan James, was an athlete too.

James went to San Francisco State University and played for the Gators from 1982 to 1986.

James’ career as a basketball player seems to have ended after finishing his time at San Francisco State.

It is James’ failure to move onto the NBA that may have led to him pushing Jonathan hard to become a success in sports.

Although Taylor was fast, he got even faster once he joined the track team in the 10th grade.

During his junior and senior track seasons, Taylor won the 100 meters at the Meet of Champions.

Taylor ran the 100 meters the following year in 10.63 seconds. The 2017 state title final was contested with a two and a half mile-per-hour headwind.

3. Had football not worked out for Taylor, he may have had a future career in science.

He double majored in astrophysics and physics at Wisconsin. The running back loves science and became interested in studying stars during his freshman year of high school.

He wasn’t just a top high school athlete. He was also a top student and member of Salem's international baccalaureate program.

Yale was one of the universities Taylor short-listed before committing to Wisconsin. He likely had the grades to succeed at the Ivy League school.

2. When Taylor arrived on campus at Camp Randle, he was relatively unknown outside of the coaches’ offices at Wisconsin.

Initially, the coaches wanted Taylor to leave high school early and begin scrimmaging with the Badgers during spring practice. However, Taylor turned down the chance to join up with the team early.

The running back’s education was important to him and he wanted to finish the International Baccalaureate program at Salem High School before starting his college football career.

Upon joining with the team for its first scrimmage under the lights at Camp Randle, Taylor scored a touchdown on his first carry playing with the number 2 offense.

The coaches switched Taylor to the number 1 offense a few possessions later and on one of his first plays from scrimmage, the running back took a 70-yard screen pass to the house for a score.

After that scrimmage performance, Taylor was immediately named the Badgers’ starting running back.

1. Jonathan Taylor is an explosive running back.

At just 5-feet 11-inches and 226 pounds, Taylor relies on his speed, agility, and durability. One of  the ways that he trained to improve these three attributes is by completing a unique cold-weather training program.

His cold-weather workout was designed by the fitness experts at Under Armour.

In April of 2020, he was a member of a group of Under Armour sponsored athletes to train in sub-zero temperatures.

In addition, they completed meditation sessions and cold-temperature breathing exercises. Taylor and the other members of the Under Armour cold-weather training group also built ice caves for shelter.