Aaron Jones (full name Aaron LaRae Jones) is a running back for the Green Bay Packers of the National Football League (NFL). He was selected by the Packers in the fifth round of the 2017 NFL Draft. He played college football at UTEP. Here's the Top 10 Facts You Didn't Know About Aaron Jones. 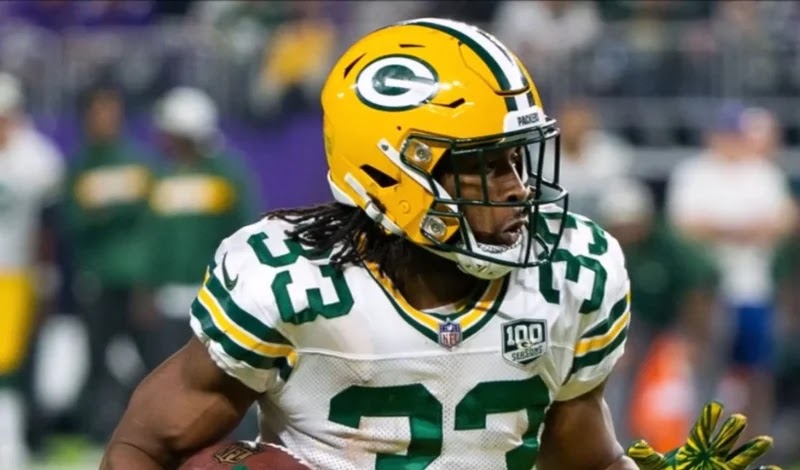 10. Aaron Jones is one of the NFL’s elite running backs, but coming out of high school, few college coaches saw his potential.

Jones’ 5-foot-9, 208-pound stature is likely one reason many colleges didn’t take a chance on him. Still, Jones was a three-star recruit coming out of Burges High School in El Paso, Texas. Only two Division I schools offered him a scholarship, New Mexico State and the University of Texas El Paso.

Jones took the offer to play at UTEP and stay in his hometown. UTEP also offered Aaron’s brother, Alvin, a scholarship to play linebacker, keeping the duo together. Despite setting records at UTEP, Jones wasn’t drafted until the fifth round in 2017 by the Packers.

9. Aaron Jones isn’t the only member of his family to play college football for the UTEP Miners.

Aaron Jones’ twin brother, Alvin, also played for the Miners. Alvin played as a linebacker and had a successful career with the team. Unfortunately for Alvin, he wasn’t drafted to play in the NFL. He did sign with the Baltimore Ravens in 2018 as an undrafted free agent.

However, after spending time injured and on the practice squad, Alvin was released in 2019. Although Alvin is no longer in the NFL, he can claim to be 30 minutes older than Aaron.

8. Green Bay Packers Running back Aaron Jones was stopped by police for speeding on Highway 172 in Ashwaubenon, Wisconsin at 11:37 a.m.

On October 1, 2017, while playing in his first season with the Green Bay Packers, Jones was stopped by police for speeding on Highway 172 in Ashwaubenon, Wisconsin at 11:37 a.m. Jones’ vehicle was clocked going 79 miles per hour in a 55 mile per hour zone.

According to the incident report, the trooper smelled marijuana in the vehicle. He also noted that Jones’ eyes were bloodshot. Jones admitted to smoking marijuana before leaving his house.

In July of 2018, after the case trial was resolved, the NFL suspended Jones for two regular season games without pay.

In his final game at UTEP, he rushed for 301 yards and four touchdowns versus North Texas.

6. Jones made headlines when he was spotted helping a random woman at Appleton International Airport in May of 2018.

According to Jones, he did the same thing anyone else would do by helping the woman off the plane and through the airport. Jones was photographed pushing the wheelchair-bound woman through the airport and the image was subsequently shared on Twitter. The woman had no clue Jones was a Packers player and merely accepted his offer to help.

As the two made their way through the airport, the woman noticed Jones’ luggage had a Packers tag on it and it was only then that she found out who the man pushing her wheelchair was.

Jones was unaware a photo had been taken until that night when he looked at his Twitter account.

5. Aaron and Alvin are inseparable and one reason for their closeness as brothers is due to the amount of moving they did as children.

Aaron Jones’ parents are both retired Army NCOs and the family led a nomadic life that took them all over the world. Born in Savannah, Georgia, the family moved around multiple states and spent time in Germany as well.

The family finally settled in El Paso when the boys went to high school and played football at Burges.

4. Aaron Jones may be an important part of the Packers today, but that wasn’t the case for Week1 of the 2017 NFL season.

Green Bay Packers RB Aaron Jones was listed as inactive for the Packers first game of his rookie year. As a rookie, Jones was originally to be used on special teams. He quickly showed his potential in practices, however.

By the end of the 2017 NFL season, Jones had played in 12 games and rushed for four touchdowns. Still, he only accumulated 488 yards. Two years later, Jones ran for over 1,000 yards and 16 touchdowns.

By that time, Jones was already in the NFL playing for the Packers. However, Molina attended UTEP as well and it is likely that the couple met in college, but didn’t start their relationship until 2018.

In 2020, Jones and Molina welcomed their first child into the world during the COVID-19 pandemic. The couple named their baby boy “Aaron LaRae Jones Jr.”

2. The birth of Jones’ first child was a remarkable event.

While the birth of Jones’ first child was a remarkable event, the running back’s actions on the day of Aaron Jr’s birth drew criticism from athletes and fans around the United States.

Not long after Aaron Jr’s birth, a photo emerged online of Jones outside the hospital delivery room playing PS4 while Molina was in labor.

The photo went viral and athletes weighed in on Jones’ actions. WNBA player Kelsey Plum called Jones “trash” for playing PS4 rather than being in the delivery room.

Jones tweeted back at Plum, writing “That’s wild, she told me to bring the game with me, but you know nothing about the whole process of having a child so ‘til you experience it don't speak on me!!!!”

1. When Jones was in high school, his parents purchased “The 6th Man” DVD for him.

The film, made in 1997 and starring Marlon Wayans, remains Jones’ favorite film. The running back still brings a portable DVD player with him on Packers road games to watch the film. The movie touched a chord with both Aaron and brother Alvin. That is why it remains a popular viewing option for him on the road as it reminds him of his family.

That’s all 10 Facts You Didn't Know About Aaron Jones, tell us where you would rank Aaron Jones among the best NFL running backs in the league!