The Super Bowl 2023 will take place on the night of February 12-13 at State Farm Stadium in Glendale, Arizona. The game begins at 6:30 P.M. ET.
Home
Chicago Bears
Facts

Khalil Mack is a football player for the Los Angeles Chargers. Mack is one of the most versatile defensive players in the game today. He has been a key part of the Bears defense, which has been one of the best in the NFL. Here's the 10 Facts You Didn't Know About Khalil Mack. 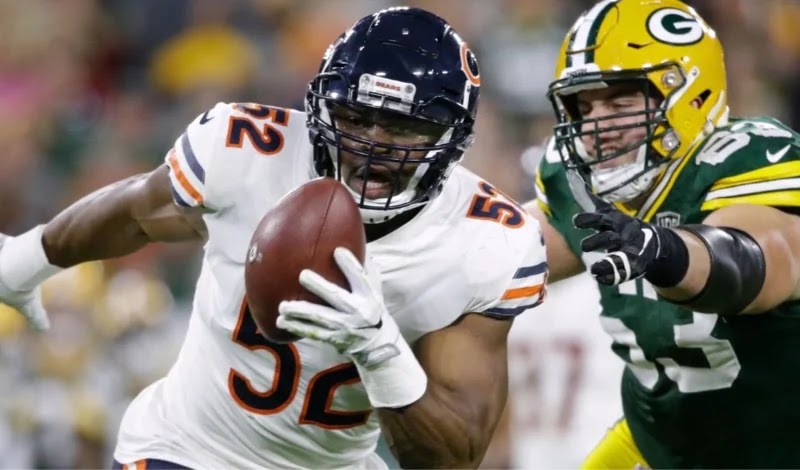 10. Khalil Delshon Mack was born on February 22, 1991, to high school sweethearts who are still together today, Yolanda and Sandy Mack Sr., in Fort Pierce, Florida.

Although he excelled in them all, his plan was to get a scholarship to play college basketball. That plan was derailed in his sophomore year when he tore his patellar tendon.

His high school football coach promised him he could get him a scholarship if he decided to play football because the injury wasn’t as big of an issue in football.

The patellar tendon assists in keeping the two parts of the leg together-thigh and calf muscles-while jumping, which isn’t a huge part of the game of football.

He had the nickname “bombshell man” because he could throw great deep passes, but his short passes weren’t always on target.

With that being an issue, the Bears linebacker decided to switch to the defensive side of the ball, playing linebacker.

7. Because he hadn’t played at the high school level for very long, Mack only got a two-star rating as a recruit, despite being named third-team All-State, and first-team All-Area in Florida.

This hurt his chances of playing for a Football Bowl Subdivision school (Division 1). But, the University of Buffalo (officially the State University of New York at Buffalo) did offer him a scholarship.

6. Khalil Mack would start as a freshman in 2009 at Buffalo, and make third-team All-Conference honors.

He chose to wear number 46, because the EA Sports NCAA Football video game had his overall rating at 46, out of a possible 99.

Feeling like he was better than that, he set out to prove it, using it as a motivating factor to succeed.

5. Bears OLB Khalil Mack would not only go on to lead the NCAA in forced fumbles while at Buffalo with 16, but he would also be named the best football player ever from The University of Buffalo.

Khalil Mack would take the two-star rating he got coming out of high school, and turn himself into a first-round (fifth-overall) pick for the Oakland Raiders in 2014, making him the first Buffalo Bull to be selected in the first round of the NFL Draft.

4. Mack taught himself how to play guitar while at Buffalo, and calls Tim McGraw and Hanson some of his favorite musicians.

He is also a heck of a singer. So much so that as a rookie, his Oakland Raider teammates tried numerous times to get him to sing R&B songs. His favorite movie is “Mary Poppins.” Mack is also an active member of the church where his parents are Deacons.

3. Khalil Mack is one of the most decorated players in NFL history.

Although only playing for eight seasons, he has been named to the Pro Bowl six years. Three of those years he has received first-team All-Pro honors, meaning he was the very best in the league at his position.

The only reason he wasn’t named Defensive Rookie of the Year was because he had the disadvantage of joining the league the same year as LA Rams defensive tackle Aaron Donald, and Jets linebacker CJ Moseley.

2. Khalil Mack has had a different relationship with the fans in Chicago than he did in Oakland.

Mack says that although he was a top-five draft pick and an unstoppable force for the Las Vegas Raiders, he could usually go wherever he wanted, without much thought of a fan approaching him.

But in Chicago, that’s a different story. One that Mack doesn’t mind. In his first few weeks as a member of the Chicago Bears defense, he said he would go to the grocery store, or to get things he needed for his newly-purchased $3.5 million

dollar mansion, and it could be a mother that welcomed him to Chicago, it didn’t matter where he went, the fans loved seeing him, and did their best to show it.

“It was random as hell,” Mack said. But the Bears fans were thirsty for a player like him, and are undoubtedly grateful he is there.

1. Khalil Mack was in a relationship with TV star Angela Simmons.

The two were spotted together in October of last year and reportedly shared a kiss. Angela Simmons is not just a star on TV, she is also the daughter of Def Jam Records owner/founder Joseph ‘Reverend-Run’ Simmons, also of Run-DMC, who co-owns a shoe company with her sister, Vanessa, called “Pastry Shoes.”

Simmons and Mack split sometime in November, as it is rumored that he is now back in an on-and-off relationship with medical student Kristie Price.

That’s all 10 Facts You Didn't Know About Khalil Mack, tell us if you think Khalil Mack is the best defensive player in the NFL!