10 Facts You Didn't Know About Rams RB Todd Gurley. See his stats, what he's done so far, and find out about his college days at Georgia. He's a star!

Todd Gurley is a 2015 NFL running back for the St. Louis Rams, drafted 10th overall in the 2015 draft. He played college football at Georgia. Here's the 10 Facts You Didn't Know About Todd Gurley. 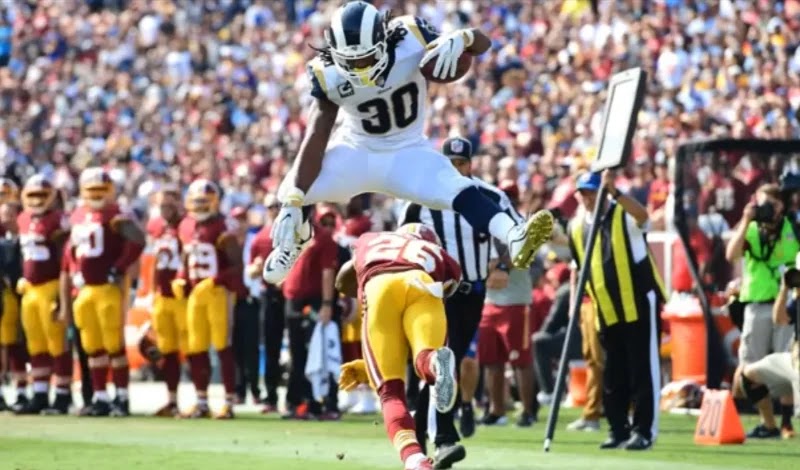 10. Todd Gurley is the youngest of Darlene Simmons’ four children.

John Simmons, his mother’s husband and the father of Gurley’s three older siblings, died before Gurley was born in Baltimore.

9. Because Gurley was so good at football when he was six years old, a Pop Warner league in Baltimore made him play on his older brother’s team, which consisted of kids aged nine to eleven.

Gurley was the star of the team. His older brother sat on the bench and everybody gave him grief about it.

8. Heading into high school, Gurley was planning to not play football anymore.

He said, “I was just going to chill. I wanted to play basketball. I decided that’s what I was going to focus on. I’d played football my entire life. I was tired of it and didn’t want to play anymore.”

His decision changed when former Tarboro High assistant coach Bo Robinson gave him so much grief about not playing football that he was at practice the next day.

7. Gurley attended Tarboro High School in Tarboro, North Carolina, where he was a three-sport star in football, basketball, and track.

He played running back and defensive back during his junior season, totaling 1,472 rushing yards and 26 touchdowns, as well as 79 tackles, an interception, and a forced fumble.

6. He was also a world-class hurdler and sprinter for the school’s track and field team.

RB Todd Gurley competed for Team USA in the 110-meter hurdles at the 2011 World Youth Championships in Athletics, where he placed 3rd in the prelims with a career-best time of 13.66 seconds, but finished 15th overall in the semifinals.

Also a top competitor in the 100-meter dash, he ran a personal-best time of 10.70 seconds in the prelims of the 2011 NCHSAA 2A State Track Meet, placing 2nd.

5. One of the luxuries Gurley did not have during high school was cable TV, so he did not watch much college football.

The first game he remembers watching was the 2006 Rose Bowl. He was much more interested in watching Duke basketball, which was accessible on local TV, or his brother’s DVD collection of the first 20 seasons of “The Simpsons.”

Running back Todd Gurley is a big fan of Duke basketball, and he played the “March Madness” video games as a kid and liked using the Blue Devils on the game.

The first team he really remembers watching was the 2003-2004 Blue Devils, led by J.J. Redick, Luol Deng, and Shelden Williams.

4. RB Todd Gurley was considered a four-star recruit and was ranked as the fifth-best running back in his class.

On February 20, 2012, Randy Higgs, one of Gurley’s closest friends, was killed in a car accident outside of Tarboro. A few days later, Gurley’s older brother, Princeton, was arrested in Baltimore on charges of armed robbery and assault.

3. In 2012, against Georgia Southern, Gurley became the second true freshman in Georgia history to rush for 1,000 yards, the only other being Herschel Walker in 1980.

In the spring of 2013, Gurley joined the Georgia Bulldogs indoor track team. He competed in the 60-meter hurdles and recorded the seventh-fastest time in school history at 8.12 seconds, to take 6th place at the VT Elite Meet.

2. On October 9, 2014, he was indefinitely suspended by the University of Georgia over an alleged violation of NCAA rules.

It only took two days of investigation to determine that he had received $3,000 over two years for signed autographs and memorabilia.

He would miss the Missouri and Arkansas games before the NCAA upheld its decision to suspend him for four total games.

In his first game back from suspension, he tore his ACL against Auburn, ending his junior season and his career at the University of Georgia. He decided to forgo his senior season and enter the 2015 NFL Draft.

He was inspired by Adrian Peterson’s comeback. When Gurley was recovering from the torn ACL he suffered in November 2014, he would watch videos of Adrian Peterson’s recovery, and he found solace in seeing a player come back so quickly with so much success.

Family members and teammates say Gurley likes to joke around and talks constantly once you get to know him. But he is reserved and tries to deflect attention to his teammates in public, especially when he is dealing with the media.

Todd Gurley likes playing “Call of Duty”, and he has been playing the games in the franchise since high school. He and his teammates bond over it, and they have a “Call of Duty” Rams clan.

That’s all 10 Facts You Didn't Know About Todd Gurley, tell us if you think Todd Gurley is the best running back in the NFL!