With the draft just hours away, Jimmy Garoppolo's future with the 49ers could be defined by the QB Kyle Shanahan selects to face the future. 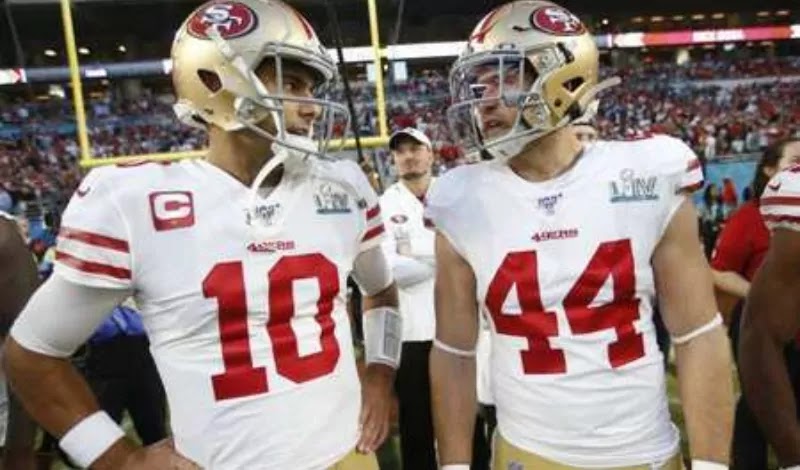 With the draft just hours away, Jimmy Garoppolo's future with the 49ers could be defined by the QB Kyle Shanahan selects to face the future.

While there is a chance that the San Francisco 49ers will receive offers for Jimmy Garoppolo during the draft, the former Patriots QB's injury history and salary ($25 million) could play a role in discouraging potentially interested teams.

Multiple teams are expected to contact the 49ers today to inquire about the availability of QB Jimmy Garoppolo, per sources. But as of early this morning, the chances of him being traded are, in the words of one source, “remote.” Let’s see if anything changes in next 72 hours.


There is talk of teams like the Bears, Texans and especially the Patriots, to repurchase a player who is well known to be very much to Bill Belichick's liking.


In Jimmy Garoppolo's contract there is a special "anti trade" clause, which means that San Francisco cannot make unilateral decisions in case there is an offer for the passer.


According to information from Ian Rapoport, San Francisco does not plan to trade Garoppolo unless the offer is very tempting to the team. It seems unlikely that Garoppolo would be willing to restructure his contract to leave the 49ers this offseason.


Clues as to the future of "Jimmy Garoppolo" could be released if San Francisco selects starter Mac Jones or if they decide to take Trey Lance, a QB who would be 21 years old entering the 2021 season and will most likely have to undergo a one-year apprenticeship as a backup before taking over the reins of the offense.


Justin Fields is another option for San Francisco to grab the starting quarterback job in 2021. However, in recent weeks Fields' value has plummeted, very much in part because of the QBS track record that is to Kyle Shanahan's liking.
Covers everything about NFL, NFL Draft, NFL News and Rumors, Super Bowl, best NFL players in history, best NFL players, NFL Mock draft and more. YouTube TV NFL.