Deebo Samuel is a wide receiver for the San Francisco 49ers. He is one of the top wide receivers in NFL and college football. Here's the top 10 Facts. 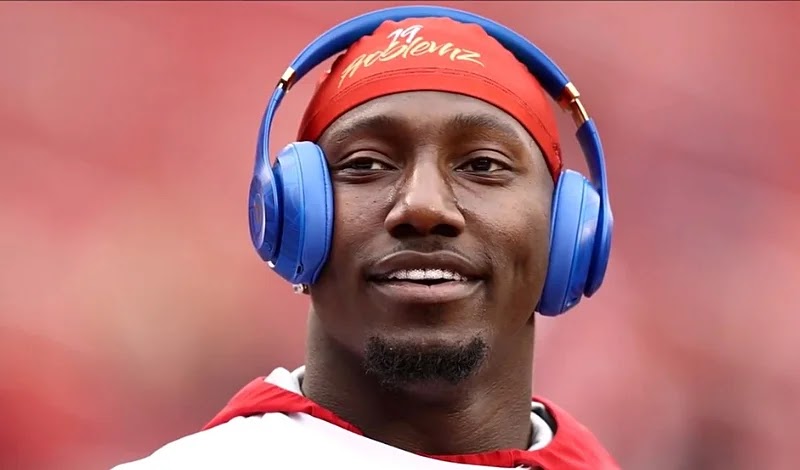 Many fans may not realize that Deebo is his nickname, which he has been known as since ebeing a toddler.

Galen noticed his son’s tendency to take toys away from other kids as a toddler.

Due to the future 49ers wide receiver being a bully, Galen nicknamed him “Deebo” in reference to Lister’s character in the Friday film.

When Samuel was in high school, she dubbed him “Sweet Feet” due to his incredible speed.

In December of 2020, Lister died of complications from Covid-19. After the actor passed away, Samuel went into mourning.

The wide receiver released a statement that read, “It was a blessing meeting you and getting to know you for sure. Rest up big bro.”

Samuel had first met his namesake in 2019 during an ESPN interview.

Although Samuel was the No. 23 high school football recruit, he was just the country's No. 112 wide receiver recruit coming out of high school.

Overall, Samuel ranked No. 838 in the nation prior to playing at South Carolina.

The four-star recruit had a few big-name football programs recruit him such as North Carolina and Maryland.

In the end, the South Carolina native selected his home-state university.

8. During Samuel’s time at Chapman High School in Inman, the wide receiver set the school’s touchdown record with 53 touchdowns during his career.

In Samuel’s senior season at Chapman in 2013, he finished the campaign with 61 receptions for 1,184 yards and 15 touchdowns.

In addition to his receiving stats, Samuel registered 837 yards and 13 touchdowns on the ground.

7. Samuel spent five years at the University of South Carolina.

He graduated from the university with a degree in retail management. Had Samuel’s football career not panned out, he could have been managing a retail store in South Carolina.

6. During Samuel’s youth, his biological mother, Felicia Winn, got into the “street life”.

Due to the rough area in which Samuel grew up and having an absent mother, he grew close to his stepmother, Precious Martin.

It was in the ninth grade that Samuel began living with his stepmother and father, Galen. He had become homeless after his grandmother, Kat, became ill and could no longer look after him.

Samuel credits his stepmother with getting him to settle down and work hard on his school grades, which helped pave the way for him to play college football.

5. The wide receiver grew up in a rough part of Spartanburg, South Carolina.

4. One of Samuel’s first actions as a professional football player for the San Francisco 49ers was to purchase a house for his older brother Tyquan.

Tyquan is Deebo’s role model and the wide receiver credits his big brother for teaching him about sports, school, and the streets.

Tyquan helped toughen Deebo up to take a beating on the football field.

While Deebo turned out well and made it to the NFL, Tyquan spent a lot of time in and out of jail.

Like their mother Felicia, Tyquan was on the streets hustling during his youth.

3. In Samuel’s rookie season with the 49ers, he got ribbed by teammates at dinner and was stuck with the bill at the end of the night.

He had to pay a $3,700 bill at Shanahan's Steak House in Denver, which is co-owned by Mike Shanahan.

Samuel received a $3.6 million signing bonus when he joined the San Francisco 49ers.

Despite the large signing bonus, the wide receiver may have been upset with the rookie hazing.

Some of the items consumed by the group were crab legs, lobster mac and cheese, calamari, crab cakes, and a seafood tower.

2. In May of 2017, while attending South Carolina University, Samuel was implicated in an assault at Five Points Bar in Columbia, South Carolina.

Samuel, Skai Moore, and former Gamecock football player Jalen Dread, were accused of misdemeanor simple assault on a 24-year-old man at around 2:45 a.m.

According to one report, the assault victim informed police he made contact with the three football players after the trio knocked the man’s cell phone out of his hand.

After Moore, Samuel, and Dread became agitated over the encounter, the confrontation escalated and the three football players attacked the man.

Following an investigation by the Columbia Police Department, Moore and Samuel were cleared of the assault and a warrant was put out for Dread’s arrest.

Jones is a model and entrepreneur. She starred in a music video for Hoodrich Pablo Juan and Gucci Mane’s “We Don't Love Em”.

Jones was born in 1996 in North Carolina and she gained her achelor's degree in Science in Mathematics from North Carolina A&T State University in 2019.

As a model, Jones promotes swimwear and clothing.

That’s all 10 Facts You Didn't Know About Deebo Samuel, tell us if you think Deebo Samuel is the best WR in the NFL!