Mark Andrews is a tight end for the Baltimore Ravens.He was drafted by the Ravens in the 3rd round of the 2018 NFL Draft. Here's the 10 Facts.

Mark Andrews is a tight end for the Baltimore Ravens. He was born in Scottsdale, Arizona, and played college for Oklahoma Sooners. He was drafted by the Ravens in the 3rd round of the 2018 NFL Draft. Here's the 10 Facts You Didn't Know About Mark Andrews. 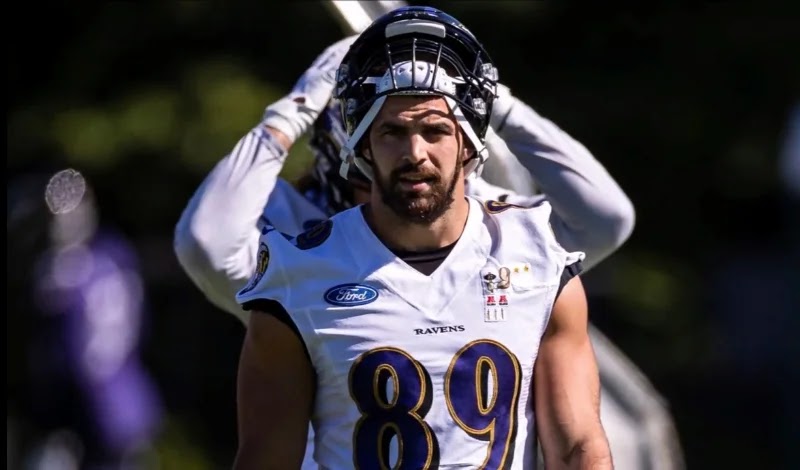 10. Andrews was nine years old when he was diagnosed with type 1 diabetes.

To deal with his type 1 diabetes and compete in  the NFL, he must prick his finger around 30 times per game to check his blood sugar levels.

When not playing football, he uses an insulin pump and wears a glucose monitor that continuously checks his blood sugar levels.

The monitor also shares his blood sugar levels with family members,  his agent, and the Baltimore Ravens’ head trainer.

9. Due to suffering from type 1 diabetes, Andrews must stick to a strict diet.

He must observe this diet especially close in the build-up to NFL games as he has to prevent his blood sugar levels from fluctuating.

The Ravens training staff provides him with Gatorade Zero to drink at practices and during games.

He is given separate drink bottles compared to his teammates to ensure he gets the fluid needed to prevent his blood sugar levels from fluctuating.

When his blood sugar levels get too low, he is given fruit snacks to eat.

You can read another interesting Facts about Lamar Jackson.

8. The Ravens tight end has two brothers  and a sister.

Mark is the only sibling to make it as a professional athlete, although his other three siblings have cut out successful careers.

Andrews’ brother Jack is a urologist, while his other brother, Charlie, works in real estate.

Annie, Mark’s sister, is preparing for a career in dentistry.

All three of Andrews’ siblings were competitive soccer players.

7. As it stands, Andrews is not married nor does he have a girlfriend.

He was previously in a relationship with Kameron Robinson.

The couple met at the University of Oklahoma where they were both students.

However, after dating for some time, the couple split up.

6. During Andrews’ time at the University of Oklahoma, he had a near-death experience.

The 247-pound tight end’s glucose levels  crashed. The incident happened in Andrews’ dorm in Headington Hall on the OU campus.

Andrews credits former Sooners long-snapper, Wesley Horky, with saving his life. Horky was Andrews’ dormmate and the special team’s player jumped into action to phone the tight end’s mother, Martha, to figure out what to do.

The reason Andrews’ glucose levels crashed was due to his usual routine being disrupted. OU had a bye week and the team’s usual 3:30 p.m. practice was changed to a morning session.

This small routine change caused Andrews to become unresponsive in the early evening as he fell into a state of hypoglycemia.

When Horky found the tight end, Andrews was lying on his bed, eyes wide-open, and staring at the ceiling.

It was never determined whether Andrews practiced too hard or had too much medication following his previous meal that caused the incident.

Andrews’ mother informed Horky over the phone to feed the tight end some fruit chews that were nearby.

The sugar in the chews mixed with Andrews’ saliva to revive him.

Horky was able to notify paramedics while on the phone with Andrews’ mother. Paramedics arrived and helped stabilize Andrews.

5. Coming out of Desert Mountain High School, Andrews was a four-star recruit.

In his senior season, he caught 68 receptions for 1,122 yards and 17 touchdowns. He was ranked as the No. 7 wide receiver in the 2014 high school recruiting class.

At the same time, he was the No. 2 ranked player from the state of Arizona.

The Oklahoma Sooners were not the only top  college football program recruiting him. Notre Dame, Ohio State, Arizona, Michigan, Texas A&M, and UCLA were all interested in his services.

Read another 10 Facts about Travis Kelce.

Prior to arriving in Norman, Andrews was a wide receiver, but his size made him a natural fit to play tight end.

Yet, the future star for the Ravens did not want to switch to tight end due to having misconceptions about the position.

His first season at OU was a redshirt year, which gave him plenty of time to  think about playing tight end.

The move paid off as Andrews is now considered by many as one of the best tight ends in the NFL.

3. Andrews is the Oklahoma Sooners’ all-time  receiving yards leader for a tight end with 1,765 yards.

He ranks sixth all-time in career touchdown receptions with 22 at OU. In addition, he is 11th in career 100-yard games with three.

2. In October of 2021, Andrews had a career-high 147 receiving yards and two touchdowns versus the Indianapolis Colts.

His motivation for the game was his grandmother, who passed away the same week.

After the game, he said, "I was sad I wasn't able to be there for her, but she means a lot to me. Growing up, she lived like a block away. I'd ride to her house, and all of our family is praying for her. I was glad I was able to play for her. She's the biggest Ravens fan ever. She looked up every article y'all have ever written. I know she's looking down on me watching, and I'm extremely blessed to have had her in my life."

Prior to entering Desert Mountain High School, Andrews was a competitive soccer player, like his siblings.

It was only during his freshman year of high school that he decided to play football. He was influenced to take up football after his brother Charlie had excelled on the gridiron.

Charlie received offers to play football in college and it inspired Mark to pursue the game.

Mark’s size and athletic ability made him a natural. He started on the varsity team as a freshman and soon became one of the top football players in the state of Arizona.

That’s all 10 Facts You Didn't Know About Mark Andrews, tell us if you think Mark Andrews is the best tight end this season!