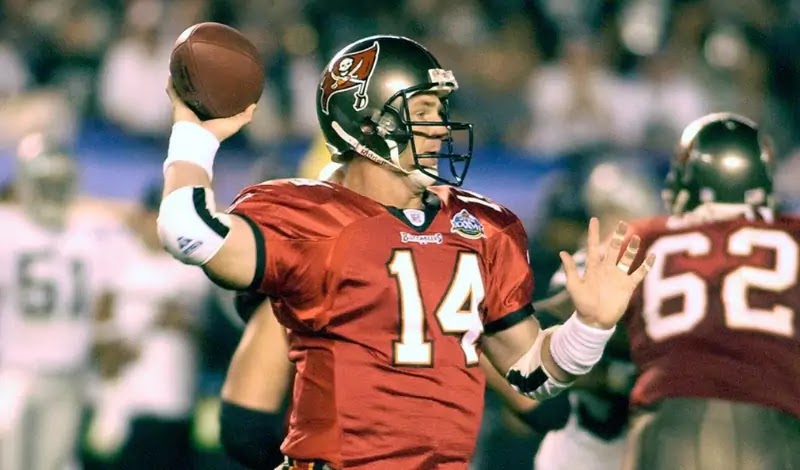 San Diego, CA (January 26, 2003) - At a press conference leading up to the Super Bowl, Warren Sapp stated that the team was going to be a three-headed giant on Sunday, dominating defense, offense and special teams. The Buccaneers weren't quite as balanced in a 48-21 win over Oakland, but they came pretty close.

The Tampa Bay defense had 5 interceptions returning 3 of them for Touchdown, 5 sacks by quarterback - two of them by Simeon Rice -, they gave up 62 total yards and 3 first downs during the first half of the game and limited the Raiders to 17 yards. totals by land. The Offensive, without being so dominant, managed to score points on each trip to rival territory and establish the run. Michael Pittman led in carries for 124 yards on 29 attempts. Tampa special teams scored two field goals, however, gave up a touchdown on a blocked punt.

Tampa Bay head coach Jon Gruden, in his first season with the franchise, defeated his previous team the Oakland Raiders. The Buccaneers gave Raiders owner Al Davis in compensation for releasing Gruden from his final year of contract with Oakland the sum of $ 8 million and two first- and second-round picks. The once-excessive sum for a head coach pass turned out not to be for the Glazer family that owns the Buccaneers.

The knowledge of his ex-team by Gruden was evident at times despite the fact that the coach was in charge of denying it and giving credit for the victory to the defense and its defensive coordinator.

For Tampa Bay, Brad Johnson completed 18 passes of 34 for 215 yards, 1 interception and 2 touchdowns. Jurevicius had 78 yards on 4 receptions and Keyshawn Johnson caught 6 passes for 69 yards.

For Oakland, Rich Gannon completed 24 passes of 44 for 272 yards, 2 touchdowns and 5 interceptions and led his team in an attempt to regain lost ground that did not prosper. Jerry Rice scored a Touchdown for Oakland becoming the oldest player to score in a Super Bowl and the highest scoring player in the postseason, however, the veteran catcher was not a factor, receiving his first pass just late in the third quarter when his team was 31 points behind on the scoreboard.

The Raiders may have found themselves somewhat off-target by the exclusion of their pregame starting center. Oakland's starting center Barret Robbins was banned from the team before the game for missing several team events and being late for the Raiders meeting Saturday night. Barret was replaced by Adam Treu.

Things started badly for Tampa Bay. On the third play of the game, Johnson was hit by Regan Upshaw as he prepared to shoot the ball and the float pass was intercepted by Charles Woodson near the middle of the field of play. Woodson returned the interception to the rival's 36-yard line.

The Raiders advanced to the 16-yard line where on 3rd down and 7 Gannon is sacked by Simeon Rice so the Raiders must settle for a 40-yard field goal from Sebastian Janikowski. After 4:20 seconds of the first quarter Oakland led 3-0.

Tampa Bay answered with a 58-yard march on 9 plays that ended with a 31-yard field goal by Martín Gramatica.

After a series of punts and an interception Tampa would score again. Jackson, later named MVP of the Super Bowl, intercepted a Gannon pass as he handed the ball to the Buccaneers at their own 49-yard line. From there, Tampa advanced to rival territory where Gramatica scored a 43-yard field goal. With 11:16 left in the second quarter, Tampa Bay took the lead for the first time by the score of 6-3.

On the next possession Jackson again intercepted a Gannon pass but this time Tampa Bay couldn't capitalize on the interception.

Oakland couldn't do anything with the ball and was forced to punt. After a 25-yard return from Karl Williams, the Tampa offense began its next possession at the Oakland 27-yard line. After two runs of 6 and 19 yards from Pittman, Tampa Bay was met with a 1st down and goal at the rival 2-yard line. Two plays later Alstott entered the end zone with a run down the middle of the formation to put Tampa ahead 13-3 with 6:24 left in the first half.

Before the first half ended, the Buccaneers marched 77 yards in 10 plays to the end zone to make it 20-3. The march culminated with a 5-yard touchdown pass from Brad Johnson to Keenan McCardell thrown 30 seconds before halftime. The march was kept alive thanks to various penalties charged against Oakland.

The Buccaneers would score again 43 seconds later when Dwight Smith guessed Gannon's intentions and stepped over the receiver's position to intercept the pass and slip 44 yards down the right wing into the end zone. The pass was aimed at Rice, who had yet to receive a single pass from Gannon at this point in the game.

With a 34-3 deficit and total dominance by Tampa Bay on both sides of the playing field, Oakland responded on its next possession with a fast march that concluded with a 39-yard pass from Gannon to Porter. The referees originally understood that Porter had not placed both feet in the end zone, but after reviewing the play they changed their decision validating Porter's score. The Raiders unsuccessfully attempted a 2-point conversion to 34-9 with just over two minutes remaining in the third quarter.

In the next offensive series Tampa Bay was forced to punt. Tom Tupa's punt was blocked by Tim Johnson just into the fourth quarter. Eric Johnson took the ball and ran 13 yards escorted by his players to the end zone to bring the Raiders closer at 34-15. This was the third time in history a team has scored after blocking a punt, the previous two being led by the Vikings and the Raiders. Oakland again tried a point 2 conversion without success.

On their next possession the Buccaneers missed the opportunity to stretch the gap by 3 points when Tupa was unable to accommodate the ball so Martin Gramatica could attempt a 22-yard field goal.

Playing a defensive defense, the Raiders mounted a 78-yard march in 8 plays that cut the gap 34-21. Rice capped off the march with a 48-yard reception from Gannon with 6:06 left of the game. On the 2-point conversion play, Gannon landed a pass to Porter that received him inside the end zone, but was pushed out of the end zone, preventing the receiver from getting both feet in. After reviewing the play, the referees understood that the receiver had not scored.

After a Tampa Bay punt, the Raiders would continue to try to reduce the difference in the score, however, the opposite happened. Gannon would throw his fourth interception of the night. Derrick Brooks took the lead over the opposing receiver's position, intercepting the ball and marching 44 yards to the end zone. With 1:18 remaining and with a score of 41-21 it seemed that everything was said in the game. However, five plays later Dwight Smith again intercepted a Gannon pass. The pass that had been deflected by a lineman ended up in the hands of Smith who ran 50 yards to score to make it 48-21 with only 2 seconds remaining in regulation time. With the touchdown Smith became the first player in history to return two interceptions for Touchdown in a Super Bowl ...
That's All The Tampa Bay Buccaneers Super Bowl Win Over The Oakland Raiders - Game Summary. Don't forget to Read the latest Buccaneers Super Bowl Win 2021 Over the Kansas City Chiefs "Super Bowl 55" between the two greatest QBs, Tom Brady and Patrick Mahomes.
Read Also :
- Raiders Super Bowl Wins
- Buccaneers Super Bowl Win Over Kansas City Chiefs | Super Bowl LV
Covers everything about NFL, NFL Draft, NFL News and Rumors, Super Bowl, best NFL players in history, best NFL players, NFL Mock draft and more. YouTube TV NFL.