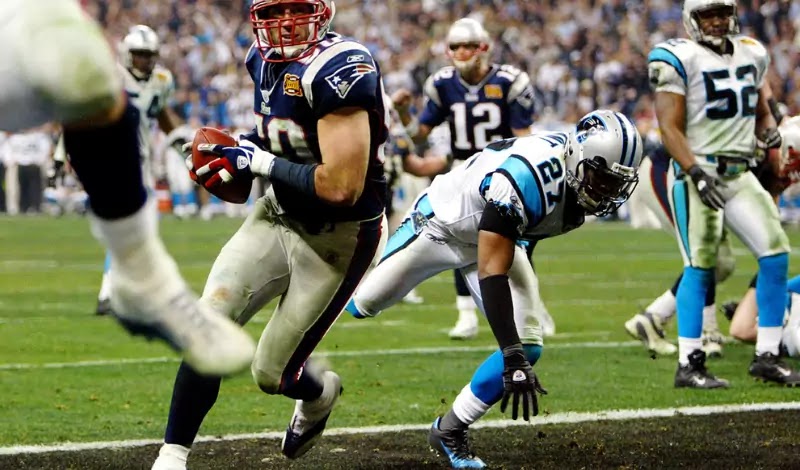 Once again, the venue for the match was New Orleans, unlucky for the team, and again on the eve of the game with St. Led by MVP of the season Kurt Warner, the Louis Rams, the Patriots were seen as outsiders in the Super Bowl. The Patriots had already faced the Rams in week 10 of the regular season and this was the last Patriots defeat in 2001, 17-24.

Entering the field, the Patriots were not represented as usual, each player by name, but as one team, the Patriots were met with universal approval and admiration, which will subsequently be adopted by the League in the future in every Super Bowl.


As opposed to playing the regular season, Bill Belichick developed a defensive game plan that involved rare use of blitz, and was focused on covering up and eliminating the Rams receivers and the running back Marshall Faulk, the plan is simple but effective and helped, at one time, to achieve Belichick's success, like the New York Giants Defense Coordinator, in Super Bowl XXV against the Buffalo Bills. The use of this plan disrupted not only Rams' passing attack, but the entire offensive rhythm of the team, and was a consequence of the fact that, usually cold-blooded under pressure, Warner looked less confident in the envelope, having been hit by a sack several times. The Patriots forced three interceptions, after which the Patriots scored points, including Ty Law's interception returned to the touchdown in the second quarter. The first half ends with a touchdown pass from Brady to David Patten in the last minute of the second quarter.


Belichick's defense continued to hold back the Rams' powerful offensive until the fourth quarter, with the Rams returning the intrigue in the final quarter, first Kurt Warner scores a touchdown to close the gap to 17-10 and then throws a touchdown pass to Ricky Proehl to equalize 17-17 1:30 before the final whistle. Without a single time-out, Brady, contrary to expectations that the game will be transferred to overtime, has an incredible drive, giving only one inaccurate pass, in the last seconds of the match the Patriots stop at the 30-yard mark of the Rams field, appeared on the field of New England kicker Adam Vinatieri puts an end to the match with a winning field goal and brings the Patriots' first Super Bowl win in 42 seasons, 20-17. Tom Brady was voted MVP of the Match.

Upon returning home, the Patriots were greeted like real heroes, about 1.5 million fans gathered at the parade on the occasion of the team meeting. The most successful era in the history of the team began. In the offseason, Tom Brady signs a long-term contract with the club, Bledsoe, in turn, was traded to the Bills for the pick of the first round of the 2003 draft.

Unlike previous Super Bowl draws in Patriots history, the New England team was considered the undisputed favorite against the Carolina Panthers in Houston ahead of the season's main game. Super Bowl XXXVIII is one of the most intense and exciting matches in Super Bowl history. After a defensive battle in the first quarter, the teams exchange touchdowns in the middle of the second quarter, the Patriots are the first to open the score, Tom Brady finds Deion Branch's Panthers in the endzone, 7-0, but Carolina's players quickly equalize, 7-7, the end of the first half was marked another touchdown pass from Tom Brady, this time to David Givens, 14-7, to which the Panthers respond with filgol, at the end of the second quarter the score was 14-10.

After the break, both clubs have a third quarter clean sheet, but in the first round of the final quarter Patriots running back Antoine Smith scores a touchdown, 21-10. Then the Panthers took the lead with two quick touchdowns, the Panthers failed twice, 21-22. Losing the initiative, the Patriots wake up and have an effective drive that culminates in a touchdown pass from Brady to linebacker Mike Vrabel, after which the club successfully scores two extra points, 29-22. Once again, the unstoppable Panthers level the score with 1:08 to play, 29-29. However, the game did not end there, as two years earlier, Brady organizes the final drive, which culminated in the victorious field goal of Adam Vinatieri four seconds before the final whistle. With a score of 32-29, the Patriots claim their second Super Bowl win in three years. Tom Brady was named MVP of the match, Bill Belichick was named Coach of the Year.

The New England have a chance to establish themselves as a dynasty and win the third Super Bowl in four years. On February 6, 2005, at Super Bowl XXXIX in Jacksonville, the Patriots face off against the top NFC team of the Philadelphia Eagles. On the eve of the match, Philadelphia wide receiver Freddie Mitchell said that he did not see any worthy d-back names in the Patriots secondaries line that would deserve attention.

As in the previous season, the main game of the year was no less tense, after a defensive confrontation in the first quarter, in the second quarter the clubs exchange touchdowns, 7-7, the third quarter also does not highlight the favorite of the confrontation, each team scores one more touchdown, 14 -14, transferring the main intrigue to the final quarter. The fourth quarter kicks off with a touchdown by Corey Dillon, and then the New England seize the lead after Vinatieri's field goal, 24-14. However, the Eagles have not given up and left the intrigue after Donovan McNabb throws a touchdown pass to Greg Lewis, 24-21. 46 seconds before the end of the meeting, the Eagles have a chance to change the situation on the field, but after several unsuccessful rallies, with 9 seconds before the final whistle, McNabb throws an interception at Harrison, which brings the Patriots a third Super Bowl victory.

As the Patriots prepared to face the current Super Bowl champions Seattle Seahawks in Arizona, the Deflategate scandal was gaining traction, with evidence pointing to Tom Brady's involvement in the incident. Some even insisted on disqualifying Brady from the Super Bowl, however, the NFL continued to remain silent, in the hope that everything will settle down by itself.

On February 1, 2015, the 49th Super Bowl kicked off, after a dry first quarter, both teams exchanged several touchdowns, the Patriots were the first to open the score in the ninth minute after Tom Brady threw a touchdown pass to Brandon LaFell, and then two minutes before the end of the first half, Marshawn Lynch flattens the score, 7-7. But the clubs do not stop there, and in the remaining two minutes, both teams managed to score two more touchdowns. Brady runs a quick 59-yard drive, delivering five accurate passes in six tries, and at the end of the drive 30 seconds before the end of the quarter, Brady gives a touchdown pass to tight end Rob Gronkowski, 14-7. The remaining 30 seconds is enough for Seahawks quarterback Russell Wilson.


After the break, the Seahawks seized the initiative, pulling ahead by two possessions, 14-24 in the third quarter, the score lasted until the middle of the fourth quarter, in the eighth minute Tom Brady finds Danny Amendola in the Seahawks endzone with a third touchdown pass of the evening, 21-24. After the Seahawks' failed drive, the Patriots offense took the ball back and Brady took the lead in the evening, 28-24, with another touchdown pass to Julian Edelman. With the remaining 2:02 left before the final whistle, the Seahawks have a real shot at winning the match. Seattle's offensive led by Russell Wilson took about a minute and a half to get close to the Patriots one-yard mark, 30 seconds before the coveted victory and one yard away from the second consecutive title, Seahawks coach Pete Caroll has arguably nominated one of the most controversial rallies in the history of the Super Bowl, opting for a risky passing rally over a quarterback running down or running. After the snap, Russell Wilson throws a pass towards receiver Ricardo Lockette, who is running into the Patriots endzone, but the combination was read by cornerback Malcolm Butler, who plays ahead and intercepts the pass, thus bringing the fourth Super Bowl to the New England Patriots.

Super Bowl III was played on Feb 3, 2019 in Atlanta at Mercedes-Benz Stadium. It was there that the Los Angeles Rams and the New England Patriots met and this superbowl was the first played at the Stadium. This is the second Rams Super Bowl loss by New England and the lowest Super Bowl championship score in NFL History. New England defeated Los Angeles 13-3,celebrates their 6th Super Bowl win in their franchise record, tying the Pittsburgh Steelers for the most Super Bowl wins. Tom Brady break the Most NFL Championship won, player statistics Record by 6 Vince Lombardi Trophy wins, Tom break the record again in Super Bowl LV with Tampa Bay Buccaneers against the Kansas City Chiefs on feb 7,2021.
That's all New England Patriots Super Bowl Wins. Share guys to reach more people.