The free agent signing period has started nearly a week. In addition to some of the most important signing news, Bengals trade Ryan Finley to texans

The free agent signing period has started nearly a week. In addition to some of the most important signing news, the following player signing news is also worth paying attention to: 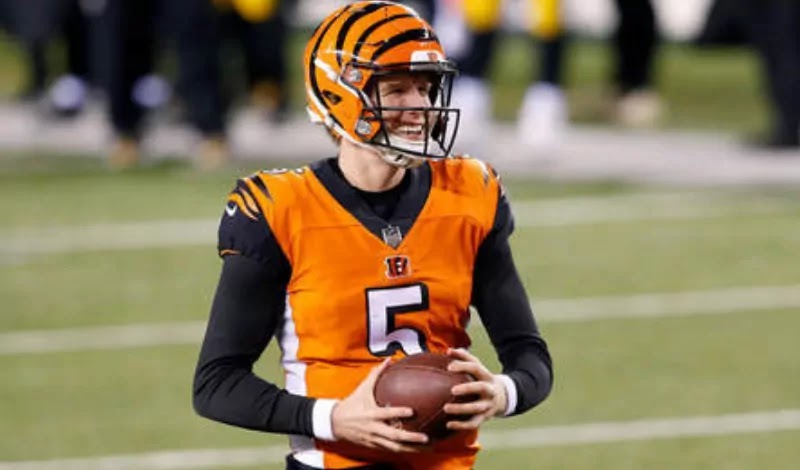 A few days after signing veteran quarterback Tyrod Taylor, the Houston Texans brought in another quarterback. They get the Cincinnati Bengals quarterback Ryan Finley. The two teams also swapped last-round picks in this deal.

The 26-year-old Finley was about to be laid off by the Bengals, and the Texans completed the deal before the Bengals made the layoffs decision.

In the two seasons playing for the Bengals, Finley, who was selected in the fourth round of the 2019 draft, played in 8 games, including 4 starts. He passed the ball 119 times and completed 58 times, with a pass success rate of 48.7%, 3 touchdowns for 630 yards, and 4 passes were intercepted.

In addition, the Texans waived veteran kicker Bryan Anger and signed Cameron Johnston as his successor. The contract between the two parties is $8 million for 3 years. They also cut veteran tight end Darren Fells. The 34-year-old Phils completed 55 catches for 653 yards and 11 touchdowns in the two years he played for the team. The Texans got the tight end Ryan Izzo from the New England Patriots at the cost of the 2022 seventh-round pick.

The Bengals cut right tackle Bobby Hart. They signed veteran offensive tackle Riley Reiff. The contract between the two parties lasts for one year and is valued at $7.5 million, including a signing bonus of $5.5 million. On Tuesday, the Bengals also signed two cornerbacks to strengthen the second-line defense: former Dallas Cowboys cornerback Chidobe Awuzie and former Pittsburgh Steelers cornerback Mike Hilton. The contracts of the two are respectively $21.75 million for 3 years and $24 million for 4 years.

The Philadelphia Eagles signed a one-year contract with safety Anthony Harris, with a contract value of $5 million. The former Minnesota Vikings player was once one of the top safety in the league. The Vikings used the privileged player label on him last year. In the 2019 season, he scored 6 steals, tied for first place in the league.

The Carolina Panthers signed a two-year contract with tight end Dan Arnold for a contract value of $6 million. Arnold completed 31 catches for the Arizona Cardinals last season and scored 438 yards and 4 touchdowns, all setting a career high.

Despite his poor performance in the Super Bowl, right tackle Mike Remmers was renewed by the Kansas City Chiefs. The two parties have signed a one-year contract with a value of up to $7 million, including $3.5 million of guaranteed income. They also signed the former Chicago Bears guard Kyle Long. In addition, the Chiefs laid off the running back Damien Williams, who played a huge role in the 2020 Super Bowl. Williams opted out of the season due to the epidemic last year, and he still looks forward to participating in the new season.

The Detroit Lions signed a contract with Breshard Perriman, a wide receiver who has performed well in the past two months of the season, on Thursday. The contract is worth $3 million for one year. They also signed veteran kicker Randy Bullock and former Green Bay Packers running back Jamaal Williams. The contract between the Lions and Williams lasts for two years and is valued at up to $7.5 million. They waived veteran quarterback Chase Daniel on Tuesday. Daniel played 4 times last season, 43 passes and 29 times, successfully scoring 264 yards and 1 touchdown, and 2 passes were intercepted. Daniel has only five starting careers in his career, but his total career salary reached $38.527 million.

The Chicago Bears waived cornerback Kyle Fuller. According to reports, the reason for the Bears' layoffs was to save salary space. Fuller was selected by the Bears in the first round of the 2014 draft. Except for reimbursement for the 2016 season due to injury, he was a starter for the remaining six seasons. He has been selected to the Pro Bowl twice and the All-NBA team once.

The New England Patriots re-signed center David Andrews for four years. They also signed linebacker Kyle Van Noy, who joined the Miami Dolphins during the offseason last year. The two sides signed a two-year contract with a contract value of up to $13.2 million.

The Las Vegas Raiders signed a two-year contract with running back Kenyan Drake, the contract value reached $11 million, and the maximum value after bonus was up to $14.5 million. Drake previously played for the Arizona Cardinals and the Miami Dolphins. After joining the Cardinals in the middle of the 2019 season, Drake completed a total of 362 rushes for the Cardinals for 1598 yards, and also completed 53 catches for 308 yards. The Raiders may increase Drake's role in the passing offense.

The San Francisco 49ers continued to strengthen the offensive line and signed veteran center Alex Mack. The contract lasts for one year and is valued at $5.5 million. Mack has been selected to the Pro Bowl 6 times. In addition, the 49ers waived veteran wide receiver Marquise Goodwin.

The Washington football team signed the former Carolina Panthers running back Curtis Samuel with a three-year contract valued at $34.5 million. Last season, Samuel completed 77 catches for 851 yards, and also completed 41 rushes for 200 yards, all setting a career high. The Washington team originally intended to trade Samuel in the middle of last season, but was rejected by the Panthers, and now finally got what they wanted. They also signed former Cincinnati Bengals cornerback William Jackson on Tuesday. Jackson is one of the best choices in the free agent market this year. The contract between the two parties is for a period of three years and is valued at $40.5 million, including a guaranteed income of $26 million.