Predictions for the 2021 NFL Draft

The NFL Draft is here. The 2021 edition will be held around FirstEnergy Stadium in Cleveland, Ohio, home of the Browns. Franchises are readying their 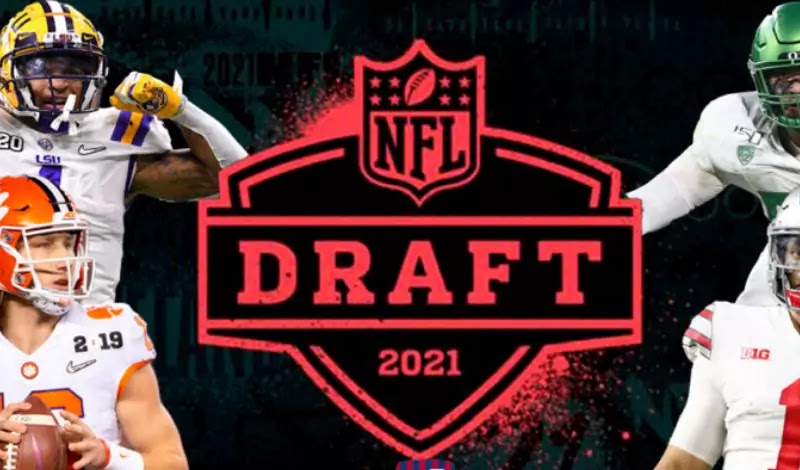 The NFL Draft is here. The 2021 edition will be held around FirstEnergy Stadium in Cleveland, Ohio, home of the Browns. Franchises are readying their picks and many fans are hopeful that their teams will find solutions to their needs.

There will be teams with no first round picks: Seahawks, Chiefs, Rams and Texans. Conversely, 4 other franchises can boast two first-day picks: Jaguars, Ravens, Dolphins and Jets. Here is the complete order:

In case you needed reminding...


I bring you 5 predictions that could happen today during the first round of the NFL Draft. Although, mind you, we know that logic is often the least important thing about Draft Day, and that's what makes it the most exciting event in the league in the offseason.

5 quarterbacks in the top 10 picks

It's no surprise to anyone to learn that this is one of the best classes in terms of quarterback talent. There are five big names on the list that have everything to turn around a franchise in need of a new quarterback. And no one should be surprised if these five prospects already have a team by the time the 10th pick of the night comes around.

Trevor Lawrence is a prospect that many analysts compare to Andrew Luck, an out-of-this-world guy with a talent rarely seen in the league. With the first overall pick, it would be crazy for the Jacksonville Jaguars not to draft the Clemson graduate.

Next up is Zach Wilson, and while no one at the Jets has come out to confirm or deny the information, all indications are that the BYU product will make it to the Big Apple.


And from the third round on, the coin is in the air. One of the big stories of this Draft is San Francisco, which moved up to the third spot to draft a quarterback. There are reports that Alabama's Mac Jones will be the pick, but Trey Lance recently joined the conversation, and OSU's Justin Fields can't be ruled out either.

In a scenario where "logic" reigns and Jones is the pick, there will be two great talents available that no doubt, many teams will fight to recruit. And this scenario gives way to the following prediction.

There will be at least two changes in order

While the first to make their intentions clear were the San Francisco 49ers, it is the 49ers themselves who could set off a general management frenzy. Going the way of Mac Jones, Trey Lance and Justin Fields will be two players that will spark multiple inter-franchise calls. Or even if Jones isn't the new quarterback in San Francisco, having two competitive guys on the roster will cause quite a day.


Rumors of New England climbing the ranks have picked up steam, and if Bellichick wants to find a solution at the position, he'll have to pay the price of sneaking into the top-10. Another team that has suffered too much at quarterback is the Chicago Bears; if management wants to clean up the Trubisky mistake, this would be a good opportunity to try to right the ship.


Atlanta, Carolina and Denver are all top-10 teams that have been getting calls to trade up; with the talent at other positions, it also wouldn't be surprising if teams don't just want to move up for quarterbacks.

Some receivers will be reunited with their quarterbacks


The Bengals have the fifth pick, and if Atlanta takes Kyle Pitts or sells their pick to someone who wants a quarterback, the way will be open for them to pick the best player available. And a lot will depend here on what Cincinnati's general management wants: protecting their quarterback with Penei Sewell, or giving them a partner in the offense of the caliber of Ja'Marr Chase, who already caught passes from Burrow at LSU.

Next up is Miami, who moved out of the top 3 only to swap positions again, now with Philadelphia. Tua Tagovailoa continues to develop his game, and the Dolphins won't overlook being able to reunite their quarterback with one of their best weapons in Alabama: Heisman De'Vonta Smith, or another formidable receiver, Jaylen Waddle.


And he's not exactly a receiver, but OT Penei Sewell could find himself with Justin Herbert if for some reason, he falls to 13th or the Chargers move up to protect their quarterback. Sure, in the end Sewell could end up in Cincinnati, Chase in Miami and there would be no reunion, but the possibilities are there.

Josh Jacobs in 2019 and Clyde Edwads-Helaire in 2020; they were the first running backs chosen in those years with the 24th and 32nd picks respectively. This year's running back class isn't outstanding, but it doesn't look like they'll fall until the second day of selections either.

The Steelers are a team that has a need to bolster the position after the intermittent James Conner, and Najee Harris or Travis Etienne are solid options to upgrade any backfield. Even Miami or the Jets, who have two first-round picks, could acquire the services of a running back.

The surprise of the Draft


With so much talent on offense available, De'Vonta Smith could be in for a nasty surprise; while, he is the reigning Heisman and an elite receiver, there are some question marks regarding his physicality. On the other side of the ball, while it wouldn't be such a precipitous drop, the best linebacker of the generation, Micah Parsons, could get his call after the first twelve picks.


Another surprise, but not exactly for falling positions, could be Kyle Pitts coming to the Dallas Cowboys. He is a player that Jerry Jones likes and a weapon that would complement an elite offense, so if there was a possibility, the Cowboys would not hesitate to add this tremendous tight end.
Covers everything about NFL, NFL Draft, NFL News and Rumors, Super Bowl, best NFL players in history, best NFL players, NFL Mock draft and more. YouTube TV NFL.