The first week of the official 2021 NFL schedule was released this morning. The remaining 16 dates will be released later today. 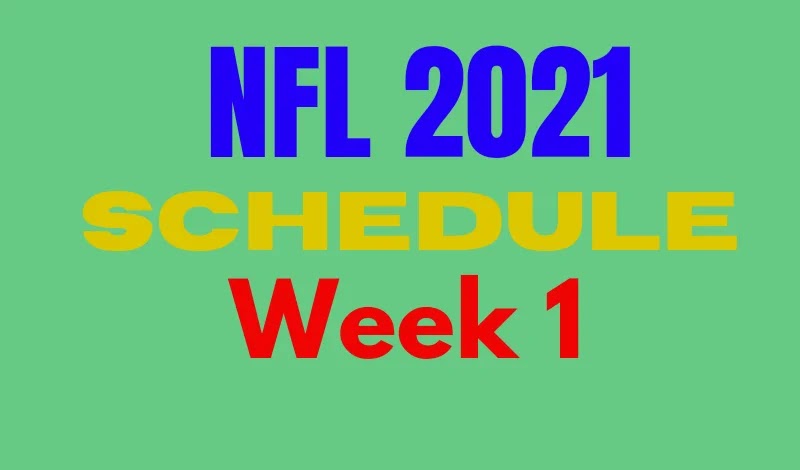 The first week of the official 2021 NFL schedule was released this morning. The remaining 16 dates will be released later today.

The reigning NFL Champions will get to boast a repeat of their full starting roster against the Dallas Cowboys on kickoff 2021. Next Thursday, September 9, 2021 at Raymond James Stadium at 8:20 p.m. ET, the Cowboys kick off with the goal of making the playoffs, something they have failed to do the past two seasons.

The Vikings visit Cincinnati to take on a Bengals still rebuilding and looking forward to the return of the 2020 first overall pick in Joe Burrow. Meanwhile, Mike Zimmer, the former Bengals defensive coordinator, returns as HC for the first time to Paul Brown Stadium, along with Paul Guenther, another former Cincinnati DC.

See you in Cincinnati, @Vikings! pic.twitter.com/pDvSODbc84


Justin Jefferson will meet his former quarterback for the first time at LSU Joe Burrow.

A revenge game for the Steelers who were defeated on December 13, 2020 by a score of 26-15 as part of Pittsburgh's season-ending debacle against the Bills. Sean Mcdermoot and Mike Tomlin were teammates at the College of William & Mary, in what will be the third consecutive matchup in the last 3 seasons between these American Conference contenders.

Headed to Buffalo for Week 1️⃣


The last time the Bills and Steelers met in Week 1 was in 1978, A season in which Pittsburgh won its third Vince Lombardi Trophy.

The Seahawks will visit Indianapolis for the first time since 2013, a game Seattle lost with Andrew Luck at the controls to the Colts 38-24. The last time these two teams collided was in 2017 with Pete Carroll's teams winning 46-18 on a masterful game from Russell Willson with three touchdowns and a couple more from the defense.


The Colts will be a tough opponent that has reached the postseason in 2 of the last 3 years under Frank Reich.

Find out the rest of our schedule tonight at 5pm on @nflnetwork!


The Colts will release their first QB in Carson Wentz after the retirement of Phillip Rivers, who only lasted one season with the Colts.

A clash of two NFL coaching debuts. Nick Sirianni with Philadelphia and Arthur Smith with Atlanta, two former offensive coordinators who know each other well from their divisional duels while at Indianapolis and Tennessee respectively.


The Falcons showed improvement under interim coach Raheem Morris, losing their last 4 games by just one possession to Tampa. Kansas and New Orleans.

Debut for Jared Goff at the helm of Detroit's offense and he will do it against 49ers he knows very well from his divisional duels at the helm of the Rams. The Lions have a virtually new receiving corps with the signings of Tyrell Williams, Breshad Perriman and TE Josh Hill, in addition to former Packers running back Jamaal Williams.

Tune in tonight for the rest of the 🗓❗️


San Francisco was the team hardest hit by injuries, the Lions' offensive line will be a good challenge for a defense that has not played together for more than a year and a half.

A game with a lot of morbidity for Sam Darnold to face his former team just in week 1. The Jets accepted three picks to send Darnold to Carolina and start a new story with the 2021 overall pick 2 in Zach Wilson.


Sam Darnold never had a good team in the Jets, but in Carolina he will have players of the quality of Robby Anderson, DJ Moore and Christian McCaffrey at his Disposal.

In recent years the Texans dominance over their divisional rival has been overwhelming, in the last 10 visits of the Jaguars to NRG Stadium they have only managed 2 wins. Houston defeated the Jags twice last season, however with the arrival of Urban Meyer, Trevor Lawrence, and the off-field problems of Deshaun Watson, who seems not to be wearing the Houston uniform again, the story could be very different this season.


The Texans have played 38 Regular season games against Jacksonville, with a 25-13 record.

First trip for the Cardinals to the Music City since the 2013 season, a year in which Bruce Arians' Cardinals escaped with a 37-34 overtime win led by Ryan Fitzpatrick. CB Malcolm Butler will face his former team after arriving in the desert to fill in for Patrick Peterson.


Arizona has won 2 of its last 3 meetings with Tennessee, in addition to leading 7-4.

Head coaching debut for Chargers defensive coordinator Brandon Staely. Offensive rookie of the year winner Justin Herbert finished in the top 10 in total yards and yards per game. Washington, on the other hand, could release a new QB in veteran Ryan Fitzpatrick, in addition to the newly arrived receiver from Carolina; Curtis Samuel.

Opening up at home Week 1 😈


The Chargers expect Derwin James and Joe Bossa to return for the 2021 kickoff.

Revenge game after the Browns' painful elimination to the Chiefs in last season's divisional game. Daniel Sorensen's controversial helmet-to-helmet hit was never penalized and from that point on the Browns were never able to regain control of a game that slipped through their fingers with Patrick Mahomes' backup sealing the pass to the conference finals.


The Chiefs are playing with a completely revamped offensive line after Kansas' embarrassing performance in the Super Bowl.

The Broncos are tied in regular season history against the Giants with a 6-6 record, however they have only been able to win a couple of times when they have to visit the Big Apple. The Giants offense led by second year HC Joe Judge, has been bolstered by the signings of Kenny Golladay and Florida rookie Kadarius Toney, plus the expected return of starting RB Saquon Barkley.

Giants. Broncos. Let's get it.


Denver's new, much-reinforced secondary will have a tough challenge for its stellar rookie taken in the top 10, Patrick Surtain II.

The New England Patriots weren't too happy about missing the playoffs in 2020, that's why they invested more than $160 million in free agency, in addition to securing the services of their franchise QB of the future in former Alabama passer Mac Jones. Miami, for its part, arrives very reinforced in the draft, after securing 6 first round picks for the next 3 years and thus backing up the project around second year QB, Tua Tagovailoa.


The Patriots defeated the Dolphins 21-11 at an empty Gillete Stadium in the 2020 season.

With the Aaron Rodgers soap opera far from a possible end, the Packers visit the Saints who will have to get used to living life in the NFL without Drew Brees. It is an unknown who will be the starting quarterback for the Saints in 2021, as the battle between Jameis Winston and Taysom Hill is just beginning.

The Saints will open the regular season vs the Green Bay Packers on Sunday, Sept. 12 at the @MBSuperdome! (FOX/3:25 pm CT)

⚜️ Full #Saints schedule will be posted on https://t.co/KlYFEtTVGF at 6:45 pm CT


Second consecutive season the Packers have visited the Mercedes-Benz Superdome following a 37-30 win over the Saints in week 3 of 2020.

Mathew Stafford will make his debut against Matt Nagy's Bears at plush SoFi Stadium. The Bears could pull off a surprise by giving rookie Justin Fields the start at the expense of veteran newcomer Andy Dalton.


Second consecutive season that the Bears have opened against a Mathew Stafford team. In 2020 Chicago defeated Detroit 27-23 after trailing 23-6 at the start of the game.

The Ravens will make their home opener at Allegiant Stadium with a home crowd, after the Raiders opened their new luxury home in the desert with empty stands in 2020. There are many former Ravens who will be playing for the Mean Machine this season, including Willie Snead IV and Yannick Ngakoue.

Surprise, Week One MNF in Vegas 😎


It will be the fourth time in history that the Ravens have made their debut on Monday Night Football this season.
Covers everything about NFL, NFL Draft, NFL News and Rumors, Super Bowl, best NFL players in history, best NFL players, NFL Mock draft and more. YouTube TV NFL.